UNLEASHING THE SUPERPOWER OF DOGS 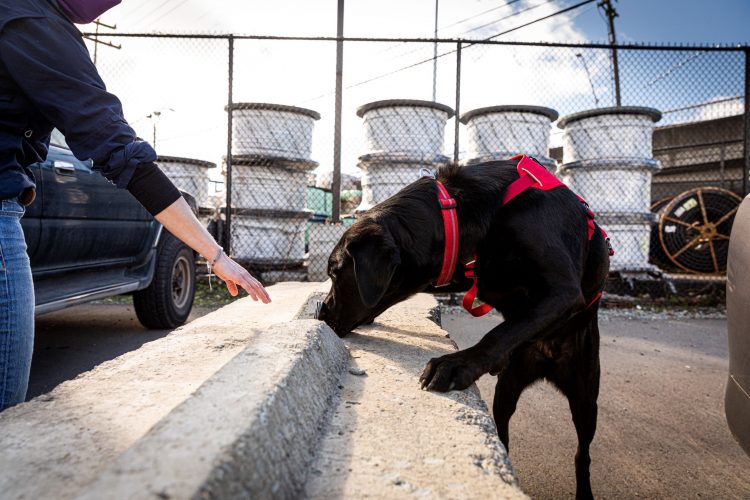 Jasper is an environmental detection dog in the Center for Conservation Biology’s Conservation Canines program.

On a blustery March afternoon in Seattle’s Ballard neighborhood, Jasper, a 3-year-old black Labrador retriever, furiously sniffs the side of a vintage boutique. Snout twitching as cars whiz by and rain drips from the rooftops, the dog noses along the row of storefronts and restaurants.

But this is no ordinary walk in the neighborhood, and Jasper is no ordinary pup. He’s a specially trained detection dog with the University of Washington’s Conservation Canines program at the Center for Conservation Biology. At the other end of Jasper’s bright-blue leash is his handler, Julianne Ubigau, who guides him along the buildings and closely watches his body language. 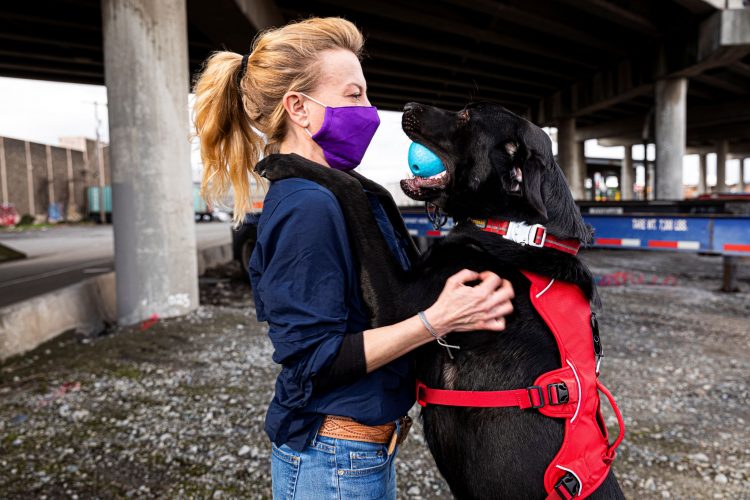 “We want to stop PCBs getting into local waters and the food chain,” explains Mike Jeffers, SPU source control inspector, about the agency’s cleanup efforts. Because PCBs are invisible and odorless to most humans, SPU turned to Jasper’s powerful sense of smell for assistance.

The four-legged detectives at Conservation Canines have helped researchers solve environmental mysteries in locales around the world, from sweltering Cambodian jungles to the snow-covered Alberta oil sands. How did detection dogs — which have been tracing explosives and narcotics for decades — become specially trained to track wildlife scat, invasive plants and chemicals?

In 1997, Samuel Wasser, the founder of Conservation Canines and a research professor in the UW Department of Biology, had his “Eureka” moment — at a conference where dog handlers described their scent-training techniques.

At the time, Wasser’s biology lab was extracting DNA and hormones from wildlife feces, or scat — a technique that allows researchers to study a species’ diet, behavior and health without disturbing the animals. But they needed an easier way to find those samples. Detection dogs, like those used at airports, seemed like the perfect answer.

“When our dogs are working in the field, they’re covering 10 times the amount of area.” says Wasser, who is also director of the Center for Conservation Biology.

For expert guidance, Wasser consulted the narcotics dog trainers at the Washington State Department of Corrections. They took him through their dog handling program, teaching him how to train detection dogs and adapt their methods to tracking wildlife scat. 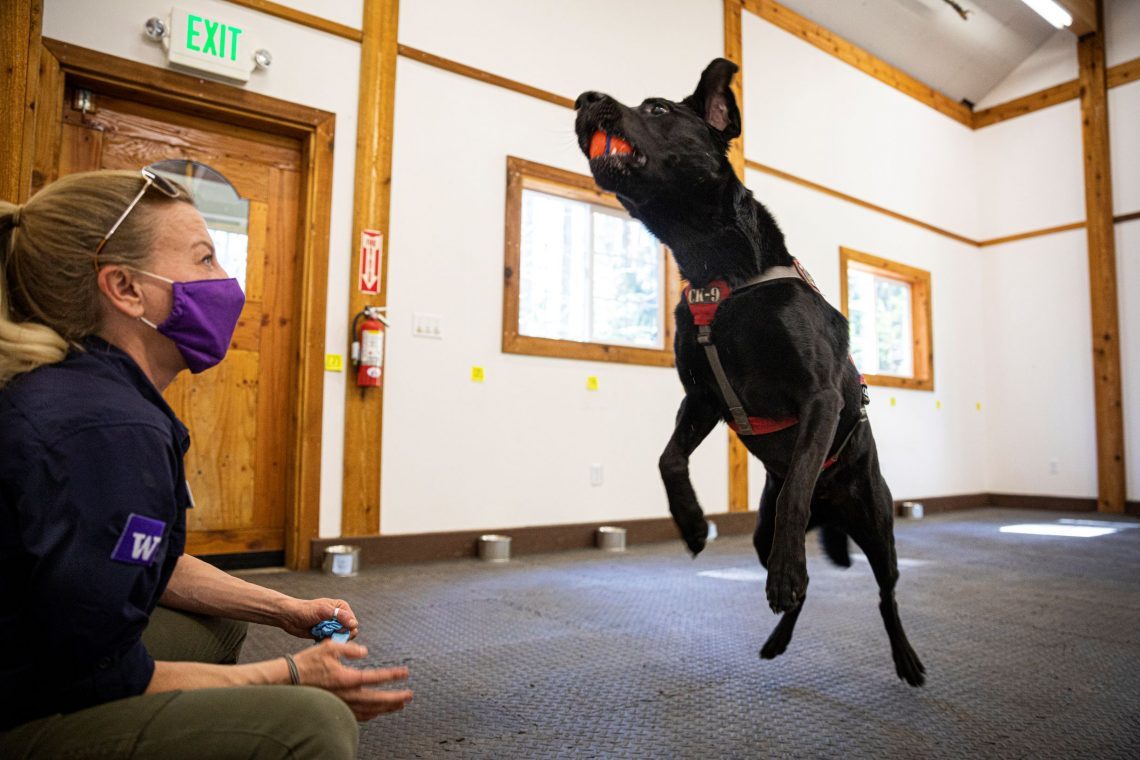 Detection dogs like Jasper are motivated by playtime, so a ball is a treasured reward during training and fieldwork.

So what makes a good detection dog? Boundless energy, a willingness to work and a singular focus on playing with a ball. “They learn extremely fast because they’ll do anything to get their ball reward,” says Wasser, adding that dogs make the sampling process more thorough and unbiased. “It’s totally independent. If the dogs smell it, they’ll work to find it, because nothing is more important than getting their ball.”

This ball-reward system has proven successful over the last two decades. Conservation canines have tracked down endangered tigers in Cambodia, monitored the health of Southern Resident killer whales off the San Juan Islands and proved that human activity — not wolves — was causing a decline in the caribou population in the Alberta oil sands. The program currently has five dogs, each working and living with their handler in the Seattle area.

Show your support: Private donations are essential to keeping the Conservation Canines program running between projects. If you would like to make a donation to support the program's mission, please visit the donate page.

While the dogs were primarily trained to find scat samples, the training techniques are now being adapted for less-visible substances like PCBs. In a pilot study funded by the Department of Homeland Security, the dogs are being trained to detect minuscule traces of illegal timber in vacuumed air samples from shipping containers.

“The beauty of this method is that we can search hundreds of containers really quickly, and we don’t even have to take them off the line,” Wasser says, noting that it could be a powerful tool for both law enforcement and conservationists concerned about habitat loss.

To find the right dogs for the job, Wasser and the Conservation Canines team head to local shelters.

The Conservation Canines training facility is located at the UW’s Pack Forest.

Ubigau takes Casey, a retired detection dog, and Aladar for an evening hike.

The dogs can cover 10 times the amount of area as humans when they’re out in the field.

The program currently has five dogs, each working and living with their handler in the Seattle area.

Deborah Giles, a research scientist at the Center for Conservation Biology, and detection dog Eba look for whale scat near the San Juan Islands.

From rescue to detection dog 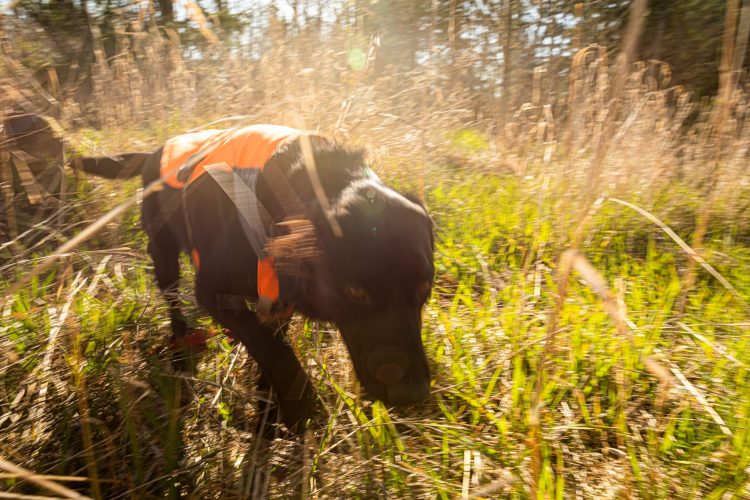 All the dogs in the program come from local shelters or rescue organizations.

When Ubigau, the Conservation Canines education and outreach coordinator, first met Jasper two years ago, she sensed he was a perfect match for the program. The energetic pup was pawing through the kennel fence to get to a bucket of tennis balls just beyond his reach — and wouldn’t sit still or show off any commands.

“This is perfect. I’ll take him,” Ubigau remembers thinking. “I don’t care if he doesn’t sit still, because I’m looking for the dog that wants to play with anything round.” Her instincts were right. Within three months, Jasper was bounding through the backcountry, helping researchers find scat from carnivores like cougars, bobcats, wolves and coyotes, his motivation an orange-and-blue ball.

The dogs are quick learners, often ready for fieldwork in a few months, but they sharpen their detection skills at the UW’s Pack Forest: a 4,300-acre site near Mount Rainier where public recreation and field research go hand in hand. Under a towering canopy of Douglas firs, dogs at the spacious wooden Conservation Canines facility are introduced to samples of what they’ll be trained to smell: animal scat, invasive plants, wildlife contraband and PCBs.

While humans can’t distinguish among animal droppings, for example, “The dogs can tell the difference,” Ubigau explains. “Our job as handlers is to supply the dogs with a careful range of training samples so they can build a scent profile for each type of target.” 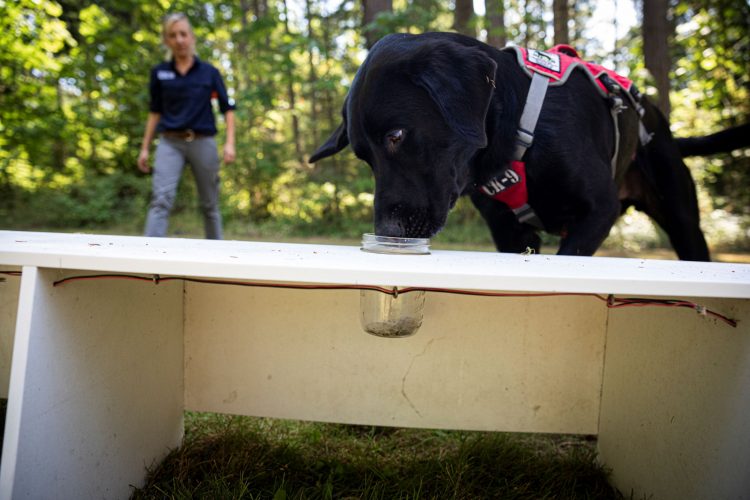 During training, Jasper calibrates his nose by sniffing a series of jars or bowls with samples.

Whether they’re training to sniff out wolf scat or PCBs, the process is similar. In a controlled environment, the dogs sniff the sample and are then led to a series of 10 bowls, only one of which contains the same substance. Each positive response earns them playtime with the ball. Training scenarios get more complex until finally the dogs are tested in the field.

“My job is to get creative and set up a training scenario so the dog can understand what we’re asking of them,” says Ubigau. “I’m an interpreter — I communicate back to the researcher what the dog is trying to tell me.”

“I’m an interpreter — I communicate back to the

researcher what the dog is trying to tell me.”

When Jasper sits in front of a cheerful yellow storefront in Ballard, shoulders upright and hips square to the ground, he’s telling Ubigau he has identified PCBs. But he gets his reward — that coveted ball — only if he’s right.

Standing a few feet away in bright orange jackets, a trio of inspectors from SPU’s Source Control and Pollution Prevention Division check the address against a list. They’ve mapped out suspected sources of PCBs in the area, but they want Jasper to verify. Neither the handler nor the dog knows the targets in advance.

“Reward him,” SPU lead inspector Jeffers says to Ubigau. Jasper’s nose has led him straight to a target. 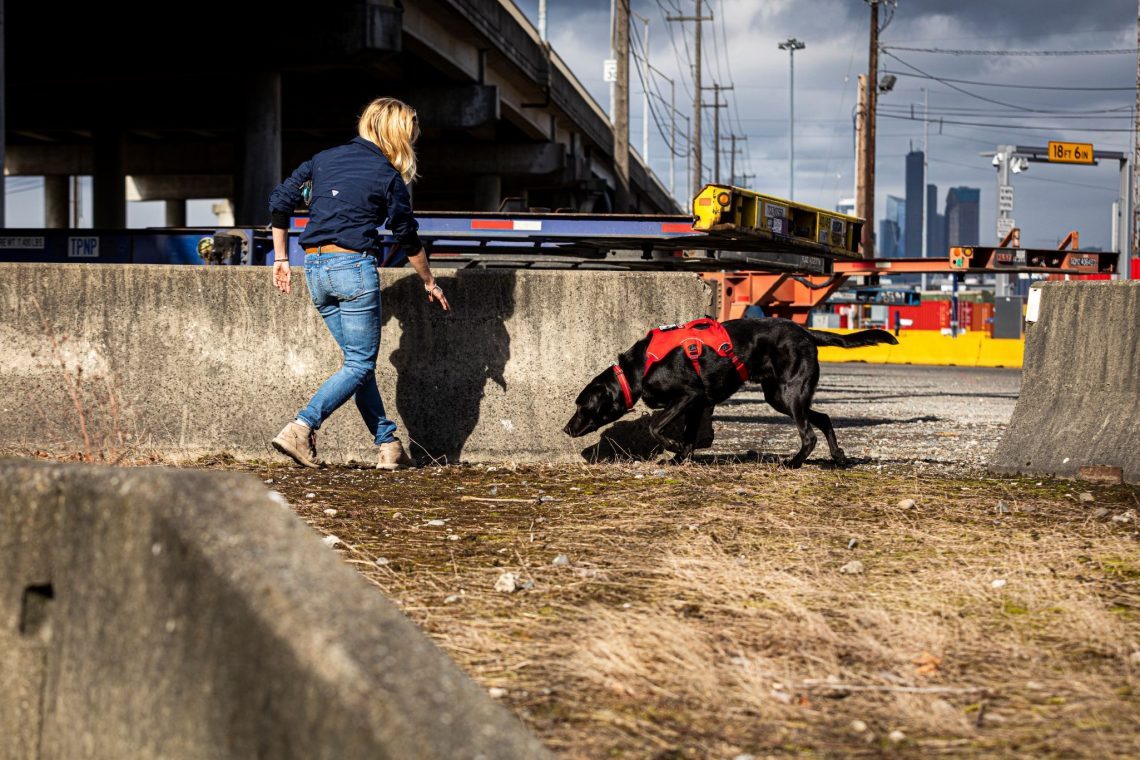 The reward goes both ways. In 2016, Jeffers helped initiate the partnership between SPU and Conservation Canines. PCBs, toxic chemicals once found in everything from electrical transformers to caulking, are said to have no known smell, but Jeffers often detected a sweet, chlorinated scent. He wondered if a dog could do the same — and possibly at lower levels of concentration.

Because PCBs were widely used until being banned in 1979, they’re found all across the city — and the nation. When they get into soil or water, they find their way through the food chain into humans and animals. Studies have shown that PCBs can cause cancer, suppress the immune system and affect reproduction.

“Our goal was to see if we could train a detection dog to smell PCBs, and at what level,” says Jeffers about the successful pilot study. Since then, SPU and Conservation Canines have done about nine surveys, primarily along the Lower Duwamish Waterway — a designated EPA Superfund site, where PCBs from old industrial sources may have seeped into the ground or river.

When Jasper detects PCBs, as he does on this day in Ballard, SPU coordinates with the property owner and state and federal agencies to clean up the site. The trained dogs often go beyond the call of duty by detecting previously unknown sources, making them an integral part of the fight to remove harmful chemicals from the environment.

For Jasper, whether he’s snout-first in a stormwater drain or sniffing a storefront window, it’s just another day on the job — and another chance to chew and pounce on his beloved orange ball.

When you support innovative approaches to conservation work, you help the UW lead the way in protecting humans, wildlife and the environment around the world.