Danyelle Thomas, ’07, became a doctor to help improve the health outcomes of underserved communities — starting with her own.

The name rang a bell. At the bustling admit desk of Seattle’s Carolyn Downs Family Medical Center, Dr. Danyelle Thomas, ’07, picked up a patient’s chart and was transported back to middle school. The chart was for a classmate she hadn’t seen in years.

It was a scene that would replay in various forms at this Central District clinic over Thomas’ three-year residency. Sometimes it was the familiar face of a childhood friend in the hallway, or an aunt who stopped to say hello before an annual checkup.

For Thomas, a University of Washington alumna whose family roots run deep in Seattle’s historic African American neighborhood, the residency was more than just an opportunity to hone her skills as a physician — it was a chance to improve the well-being of the community that made her who she is. 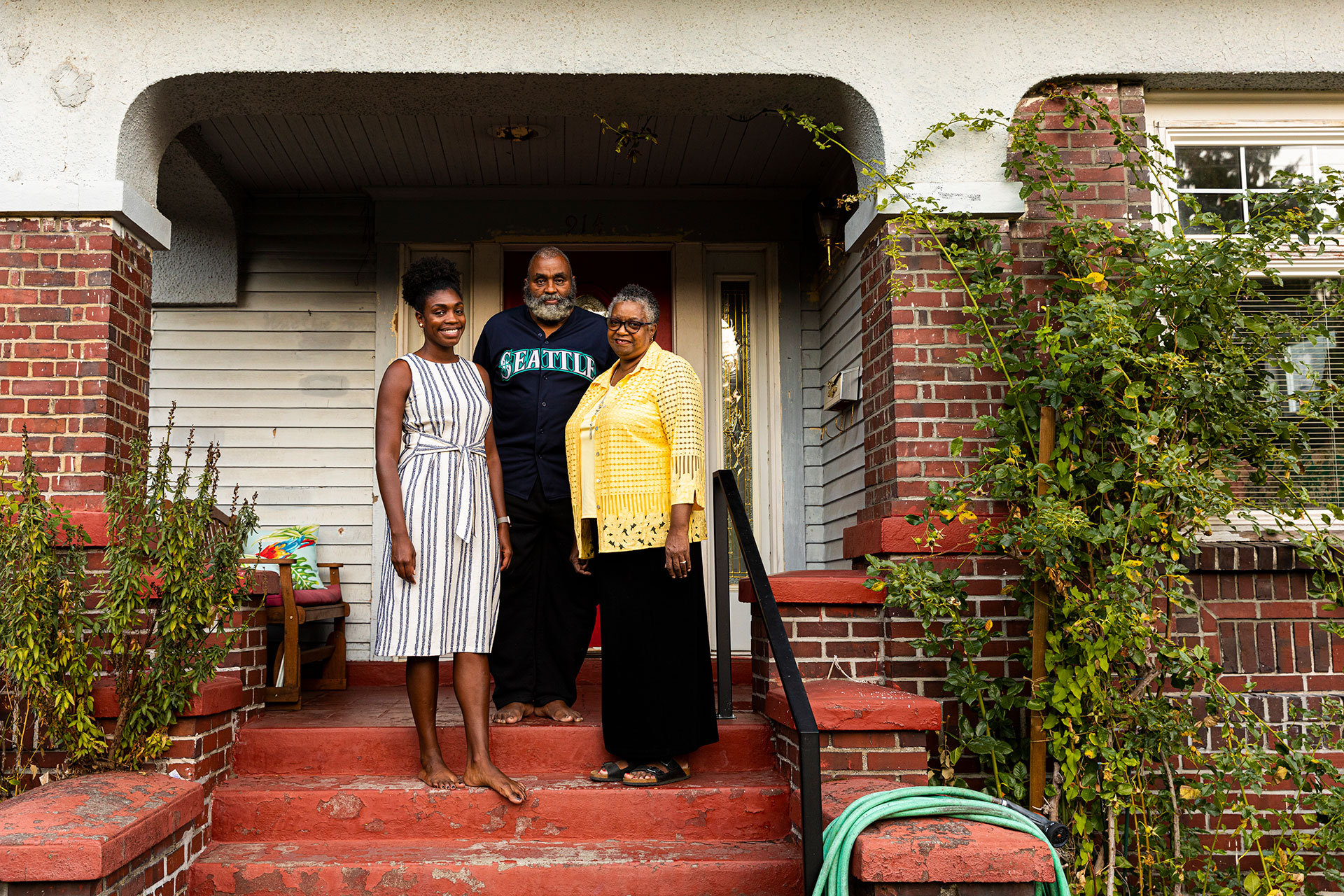 Dr. Danyelle Thomas, pictured here with her parents at her family home, returned to Seattle’s Central District for her medical residency. 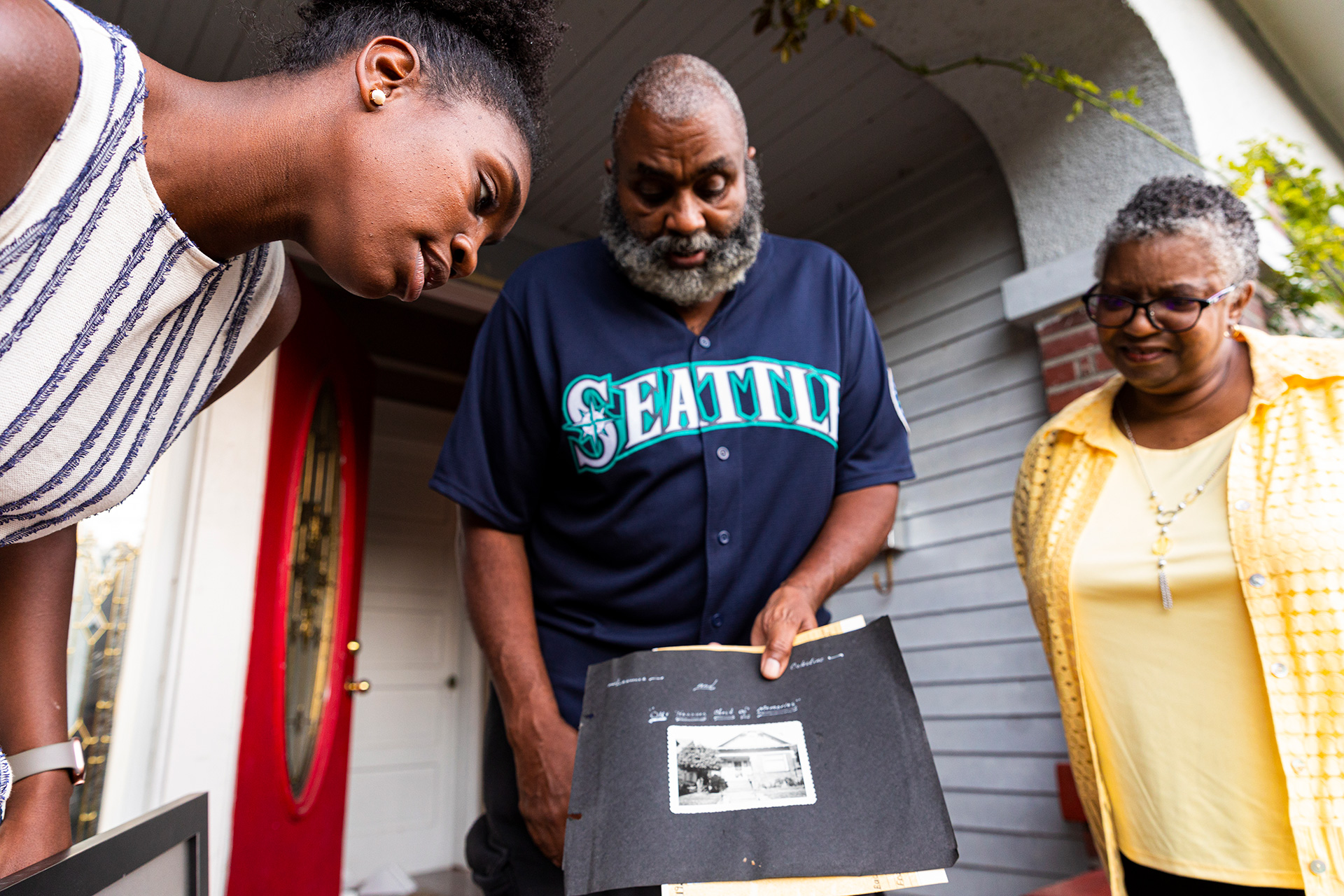 Thomas' parents, Deborah and Gregory Thomas, show a photo of their home from when it was first purchased by Danyelle's paternal grandfather.

“There are so many communities that are marginalized to the point where people write them and their experiences off,” says Thomas, who finished her residency in June and now practices at Pacific Medical Center on Beacon Hill. “I was kind of an underdog in becoming a doctor, so I want to help people who need the help.”

Thomas didn’t have to look far to see that African Americans are more likely than other Americans to suffer heart attacks, die from cancer and have chronic diseases that go unchecked. These disparities are the result of many factors, including systemic racism in and beyond health care.

Studies show that Black patients benefit from having Black doctors like Thomas — with higher levels of trust, shared decision-making and other positive outcomes. But Thomas is an outlier in her profession: Fewer than 5% of working physicians are African American, and even fewer are Black women. 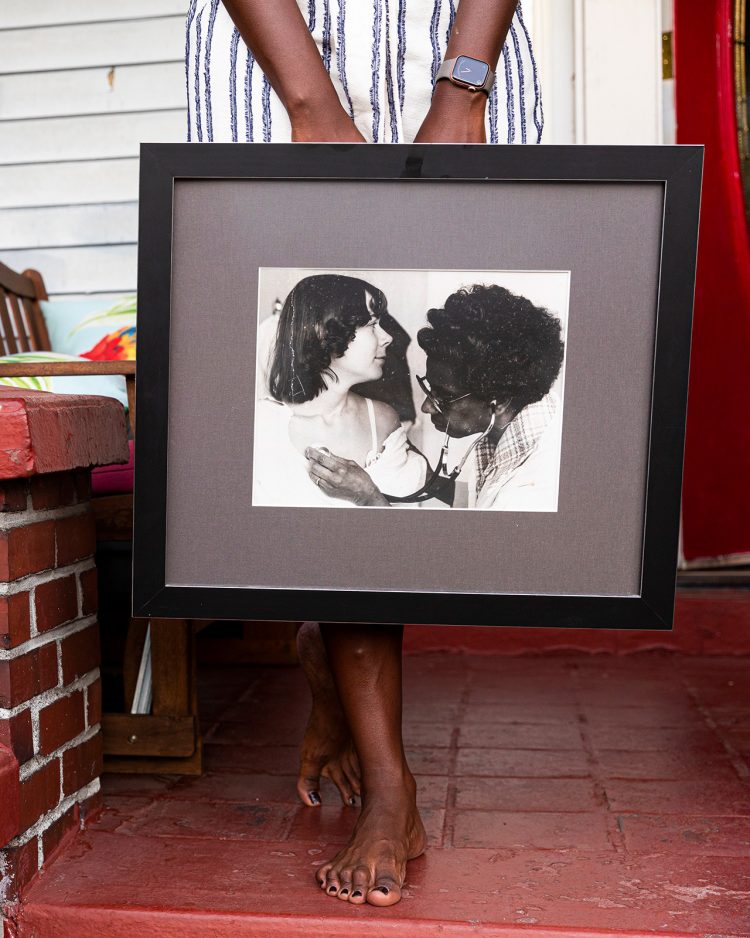 Although Thomas is the first physician in the family, her grandmother and mother were both nurses. Here, Thomas holds a photograph of her grandmother treating a patient.

To do more and be more

Thomas was the first in her family to attend a four-year college and medical school, but she’s not the first to chart a pioneering course in health care. Her grandmother — “a 5-foot, 6-inch force of nature” — moved to Seattle in the 1940s to become one of the area’s few Black nurses. Her mother, too, is a retired nurse who worked at the same Beacon Hill clinic where Thomas now practices.

But Thomas didn’t consider medicine until after she graduated from the UW, where she earned a degree in biochemistry and a math minor, with the support of the Costco Diversity Scholarship. Given to high-achieving students from underrepresented communities, the scholarship was a vote of confidence that made Thomas “want to do more and be more.”

While working for a Seattle pharmaceutical company testing a prostate cancer treatment, Thomas saw that African Americans made up a shockingly low percentage of the clinical-trial participants, despite being more likely than others to get and die from the cancer. It was a glaring inequity that frustrated and disappointed her — but ultimately motivated her.

“If we know there’s a huge population that can be helped, why aren’t we doing more?” she remembers wondering at the time. “That’s when I thought maybe I should be a doctor.”

Inspired to help both individuals and whole populations, she applied and was accepted to a four-year combined medicine and master’s of public health program at the University of Miami. Even that process illuminated some of the barriers to diversifying the physician workforce.

“I didn’t have a lot of the opportunities afforded to my peers,” says Thomas, who worked full time while studying for the MCATs, while many of her fellow medical students had taken the summer off to prepare. “There are many things that come with money and opportunities that the people we need to be doctors can’t access.”

Throughout the grueling, often isolating years of medical school, Thomas’ family and friends cheered her on from 3,000 miles away. She was overjoyed when she matched to the Swedish Family Medicine Residency Program at Carolyn Downs — about a mile from the house in which both she and her father had grown up.

It meant being closer to her support group and back in the community she wanted to serve: her own. 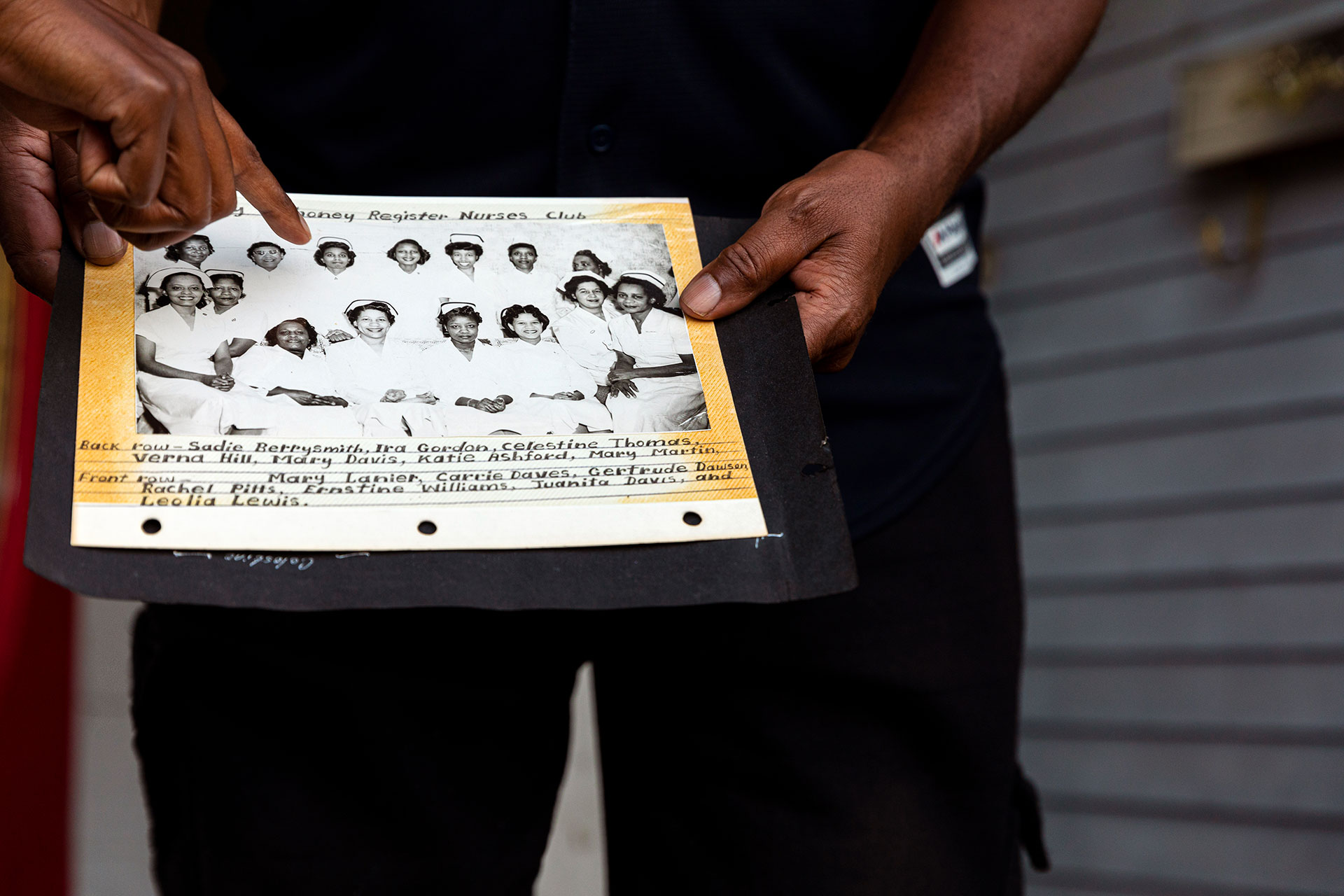 Danyelle Thomas points out her grandmother, Celestine Thomas, who helped found the Mary Mahoney Register Nurses Club (now the Mary Mahoney Professional Nurses Organization) in 1949. After moving to Seattle, Celestine Thomas worked as a nurse at Harborview Medical Center, one of the few places where Black nurses could find work at the time. Later in her career, after having three children, she became a nurse practitioner; her determination in both her career and her life continue to inspire her granddaughter.

Every year, the UW’s Costco Diversity Scholarship identifies high-achieving, high-need incoming freshmen who are from communities traditionally underserved in education. Each student receives $10,000 per year for four years, thanks to the Costco Scholarship Fund, which was created in 2000 by Costco co-founders Jeff Brotman, ’64 and ’67, and Jim Sinegal.

From the moment Thomas walked through the doors of the Carolyn Downs Family Medical Center, she felt at home. Founded by the Seattle chapter of the Black Panther Party, the clinic sits on the same Central District sidewalks she had walked in her youth on the way to church and to school at Garfield High. And the clinic’s mission aligned with her own: to improve the whole community’s health. On any given day, Thomas saw a broad spectrum of that community, from newborns to octogenarians.

One of her goals is to help patients understand their own health. She knows how vital it is that people have access to medical information in plain language.

“People should know what’s going on,” Thomas says. “When somebody has high blood pressure, I get animated. I explain there’s a medication to help lower your blood pressure, and that’s important because you’re more likely to have this other problem if you don’t [take it].”

Those messages are easier to deliver when patients can see themselves in their doctors. At her practice on Beacon Hill, Thomas is the only Black primary-care physician. When she walks into the exam room, her patients are excited and grateful to see her. 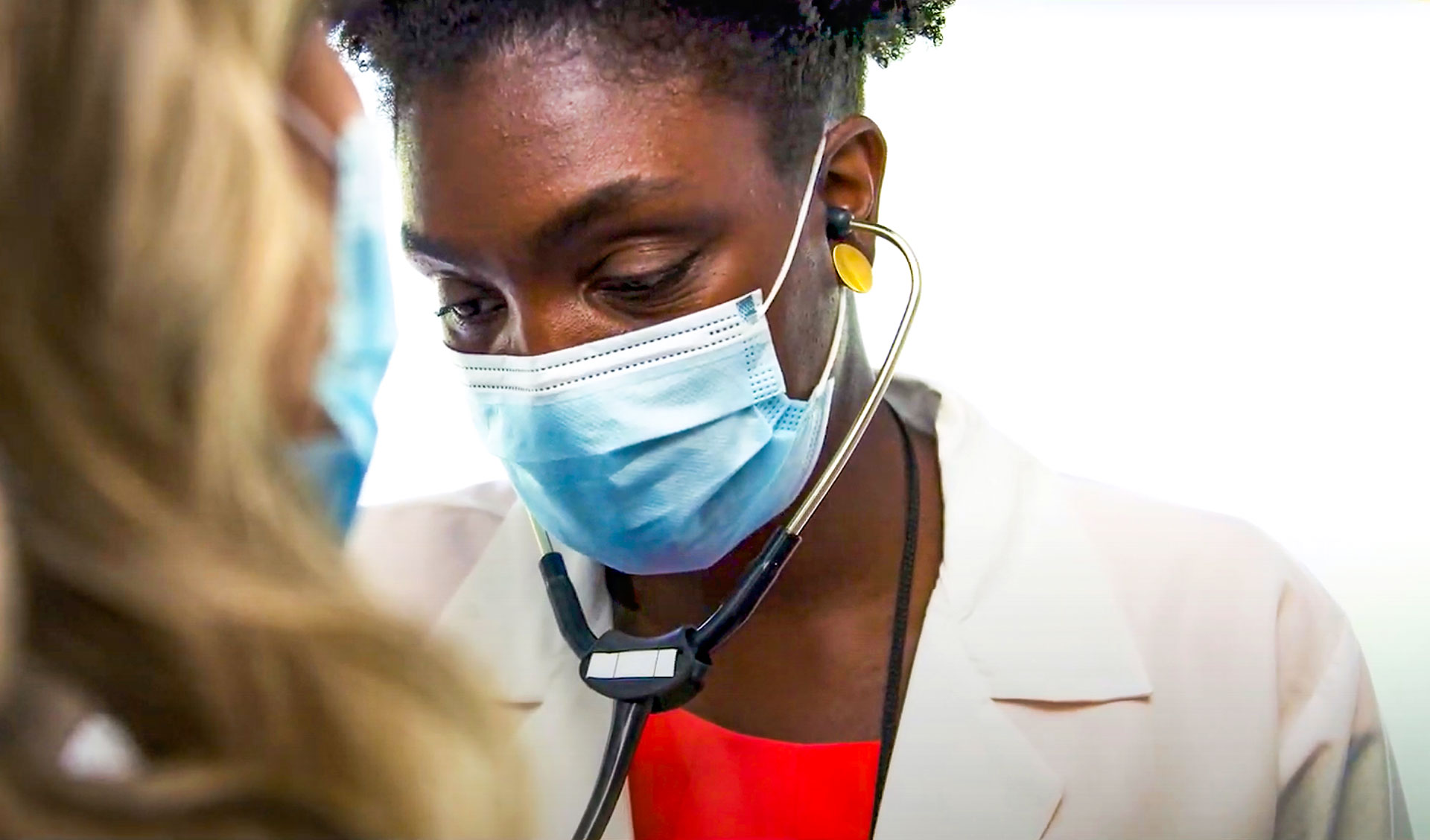 Thomas treats a patient at the Carolyn Downs Family Medical Center, where she finished her three-year residency in June 2020. She now practices at Pacific Medical Center on Beacon Hill.

“We need physicians that look like the patients, so there’s an inherent trust and bond there,” says Thomas. “We are the same, but I just happen to be the doctor. I think that’s really important in the way I talk, explain and relate to patients.”

That’s why representation matters to her. It’s also why she spends a little extra time with her youngest patients, encouraging them to try out her stethoscope or look in her ear before she looks in theirs.

“We have to start nurturing it early, before they even go to school, because high school is almost too late,” Thomas says. Her goal is for Black doctors to be commonplace. “My success would be in me not being that special.”

Watch a profile of Thomas’ journey to the UW and beyond

When you support scholarships for Huskies from underrepresented communities, you open doors for students like Danyelle Thomas — and help foster diversity on campus and in their careers.