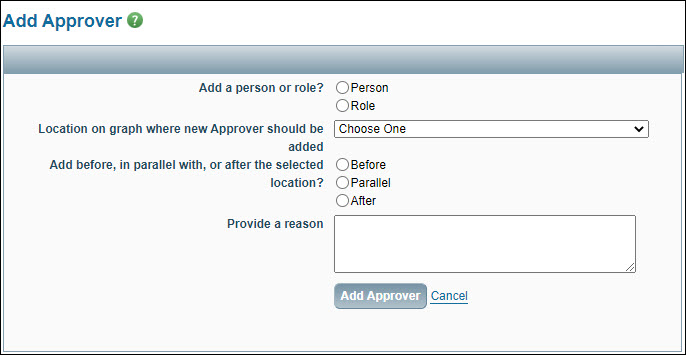 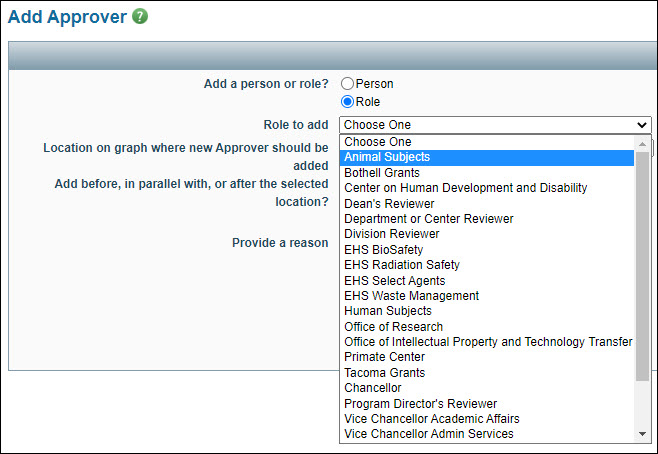 The Approval Flow may change at various times in the lifecycle of an application. Someone could add an ad hoc reviewer or make changes to a withdrawn or returned eGC1 that affect the flow.

If none of the changes affect the approval flow, then the re-completed eGC1 will continue its routing with the next unapproved node. Any prior campus approvals remain and any that are “waiting approval” receive another email notification.

However, if the preparer changes, for example, the list of research personnel or the organization receiving funding, these changes will add or remove nodes from the previous approval flow. When the preparer re-completes the eGC1, the system compares the previous flow and the new flow. Any approved nodes on the previous flow that also appear on the new flow will keep their approved status and information. The system will notify the reviewers for any new nodes at the appropriate time.

If the changes to an eGC1 are substantial, it is up to the preparer and/or PI to notify any reviewers that have already approved it. If an additional approval is necessary, the preparer can add an ad hoc node. Another option is for a reviewer to add a comment to document approval of the changes.

Regardless of what fields a preparer changes on a withdrawn or returned eGC1, the system will not update the SPAERC “assigned to” field. This ensures that the OSP person who was working on the eGC1 will see it reappear on their tasklist once the preparer re-completes it. For more information on how the system assigns eGC1s, see Monitor New Applications.

If the preparer changes the org code, the system will updated the OSP group.

When a preparer completes an eGC1 and submits it into routing, the system finalizes the approval flow based on the data in the eGC1. At that time, SAGE automatically sends an email notification requesting review of the eGC1 to the PI specified in the eGC1. The notification email specifies the action required of the reviewer and includes a link to the approval graph.

Note: If the PI is the person who completes the eGC1, the system automatically marks the application as approved by the PI. 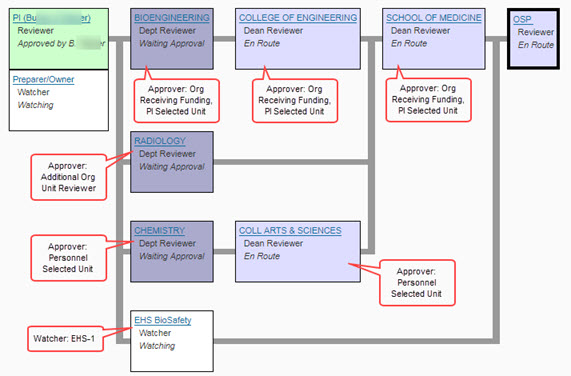 Once the PI has approved, SAGE automatically notifies the next set of reviewers on the approval flow. The system emails each authorized reviewer for a unit, but only one reviewer needs to approve the eGC1. Once a reviewer approves the eGC1, the status of the node on the approval graph changes to “Approved by” followed by that reviewer’s name. The node also changes color from Waiting Approval (purple) to Approved (green)

In the above example, the Dept. Reviewers for Bioengineering, Biology, and Chemistry and the Reviewer for EHS Select Agents were notified when the PI approved the eGC1. The eGC1 is “Waiting Approval” for each of these reviewers; the eGC1 is “En Route” to the remaining reviewers. When a node on a given “row” changes to approved status, the system notifies the next node and changes its status (and color) from En Route to Waiting Approval. In the example above, when the Bioengineering Dept approves, the system will notify the College of Engineering reviewers.

Any campus reviewer may approve the application prior to receiving their notification. The system does not impose any specific order on the approvals.

Once all of the campus reviewers have approved the eGC1, it moves to In OSP status, and the PI, eGC1 Preparer, and Admin Contact are notified of the status change by an automated email.  You can approve eGC1s out of the order on the approval graph, but this rarely happens. You can view all the email notifications sent to reviewers, and preparers and contacts for a specific application by clicking Email Notifications from the left-navigation menu of an open application. The page lists the reviewers who were notified, the date the notification occurred, and, under Action Taken, the reason.

When a reviewer from a specific unit approves the application, that information is added to the eGC1’s approval history, which you can view from the History & Comments page of the application. You may also view a snapshot of the eGC1 and Approved Attachments as they were when approved.

In very rare cases, OSP may approve an application that is still in Routing status when, for example, one unit does not have any reviewers available within the deadline timeframe. You cannot do this for Grant Runner applications.