A CALL TO ACTION

Associate Professor Wendy Barrington is bringing a passion for health equity to her new role as the inaugural director of the UW’s Center for Anti-Racism and Community Health.

When Wendy Barrington steps in front of a class or community group, she thinks about the stories in the room.

“There is a power in sharing our stories — to value the lived experiences of others in our efforts to advance health equity,” says Barrington, ’12. “A vulnerability that invites connection, trust, collaboration and sense-making — to co-create knowledge.”

Barrington’s own story began in suburban Oregon and California, where she was never sure how she fit in. “My mom is white, my dad is Black,” she explains, “and I was acutely aware of not being white — through racist teasing and bullying about my features.” Some of her friends’ families, she recalls, disapproved of her because she was Black. She longed to not be an outsider.

In college, Barrington found that connection in the Black undergraduate community. “I lived in a dorm that celebrated the Black diaspora. I focused my social relationships within the Black community. I reveled in Black excellence.” She recalls, “It was revelatory. To not be apart, but be a part. Where acceptance was unconditional.”

Looking back, Barrington sees the importance of acknowledging her proximity and ability to benefit from whiteness as a biracial Black woman. “My racialized experiences, while harmful, were incredibly benign compared to what other Black and brown children and adults have faced and continue to face in this country,” she says.

As a UW associate professor in the schools of Nursing and Public Health, Barrington approaches her research through this racial-equity lens, working to address the social, structural and environmental factors that cause health disparities between Black and white adults in the U.S. “Having a dual identity where I feel like an insider-outsider in almost every space, I see that as a unique opportunity to champion equity,” she says, gesturing to emphasize the weight of her words. “I can use my positionality to listen deeply to communities of color and speak truth to power.”

In fall 2021, Barrington stepped into a new role where she’ll create a platform for others to do the same: She’s the inaugural director of the UW School of Public Health’s new Center for Anti-Racism and Community Health (ARCH), which will study and develop ways to address the root causes of racial health inequities. It’s a role she might not have predicted, earlier in her career, but it’s an expression of her lifelong commitment to being a positive force in the world.

As a child, Barrington and her mother — a social worker, public-school teacher and single parent — were a close-knit family unit of two. Barrington watched her mother working with vulnerable populations, whether helping people discharged from psychiatric facilities integrate back into the community, or teaching and mentoring middle schoolers. Seeing her mother provide professional support to those who needed it left a strong impression.

Barrington entered college on a pre-medicine track, but an epidemiology course opened her eyes to the impact of public health, promoting well-being for entire populations. 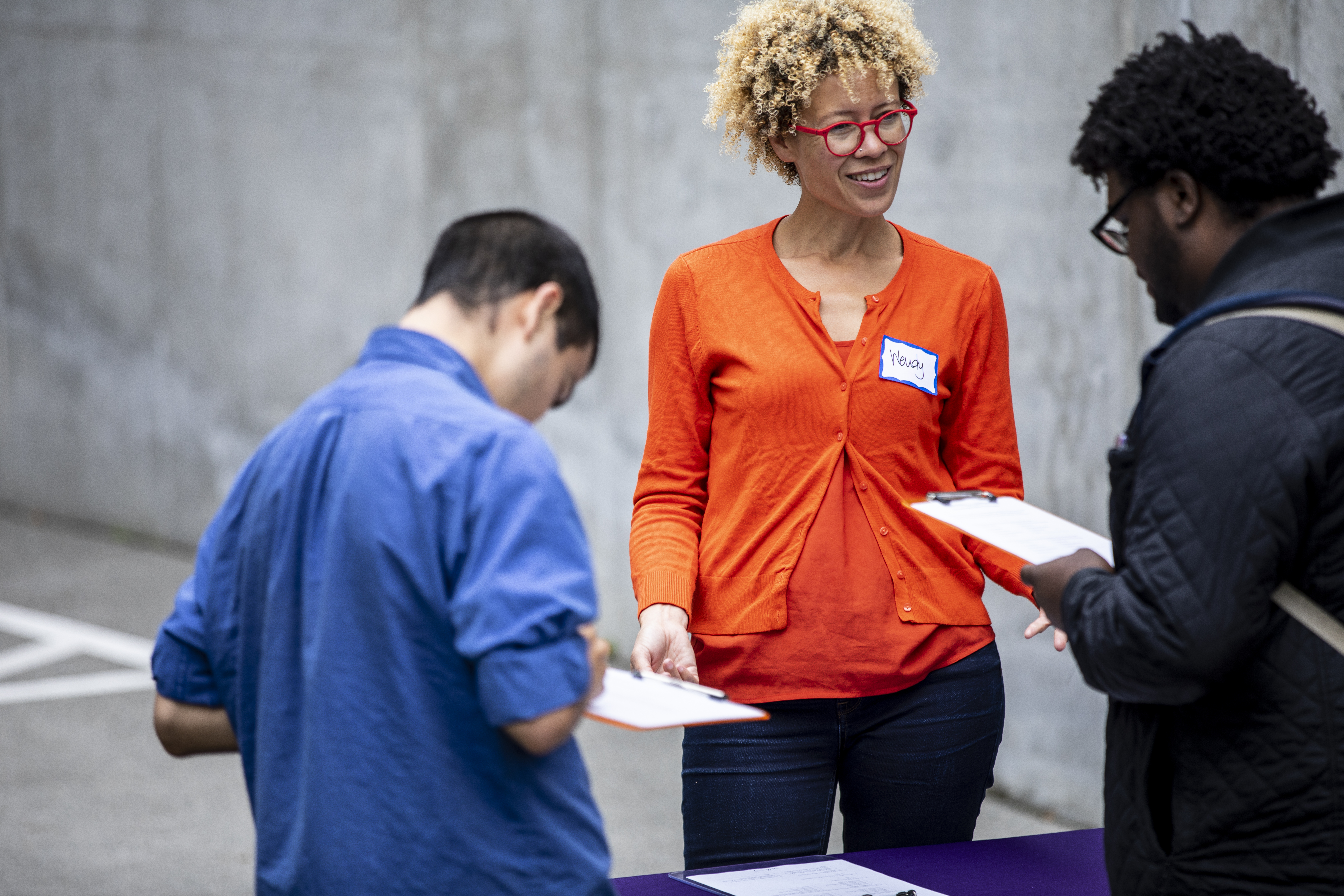 Barrington talks with participants at a community workshop for the UW’s Doorway Project, an effort to support homeless youth around the U District.

“I’ve always felt that it’s about different social exposures,” says Barrington, who gets animated about making this distinction clear. “There isn’t inherent biological difference that can be tied to racial categories as we know them. Rather, there are differences in behavioral and physiologic responses to environments — and exposure to these environments is socially patterned based on race.”

She arrived at the UW as a doctoral student in epidemiology, determined to learn more. For her dissertation, inspired by having lived in a variety of environments, Barrington explored how a neighborhood’s walkability and access to food could affect the obesity rates of those who live and work there. A person’s location isn’t always a matter of choice, especially in a city like Seattle with a legacy of racial segregation.

Looking at these intertwined, dynamic factors is important to Barrington, who’s passionate about training future nurses and public health professionals to see beyond the data to people’s lived experiences. “It’s tricky to capture the experience of most, rather than the exception,” she notes. “Usually, we are presented with data that does the opposite, which takes attention away from addressing common social exposures of negative health outcomes — the root causes.”

Sharing lived experiences became a critical teaching tool for Barrington. When the UW campus hosted Tent City 3, an organized community for those experiencing homelessness, residents said they wanted health-care providers to understand their lives. So Barrington arranged for her nursing students to meet and talk with the tent city residents, learning about their experiences and their health.

“I saw this as an opportunity to begin rectifying power imbalances between nurses and a significantly marginalized patient population,” she explains. “To encourage students to connect as humans rather than providers — a role which is steeped in paternalism and racism.”

In 2020, as Barrington watched the dual pandemics of COVID-19 and systemic racism collide in the open, she faced a turning point. The death of George Floyd at the hands of police marked a pivotal moment: She realized she could no longer work without adopting an explicitly anti-racist approach. 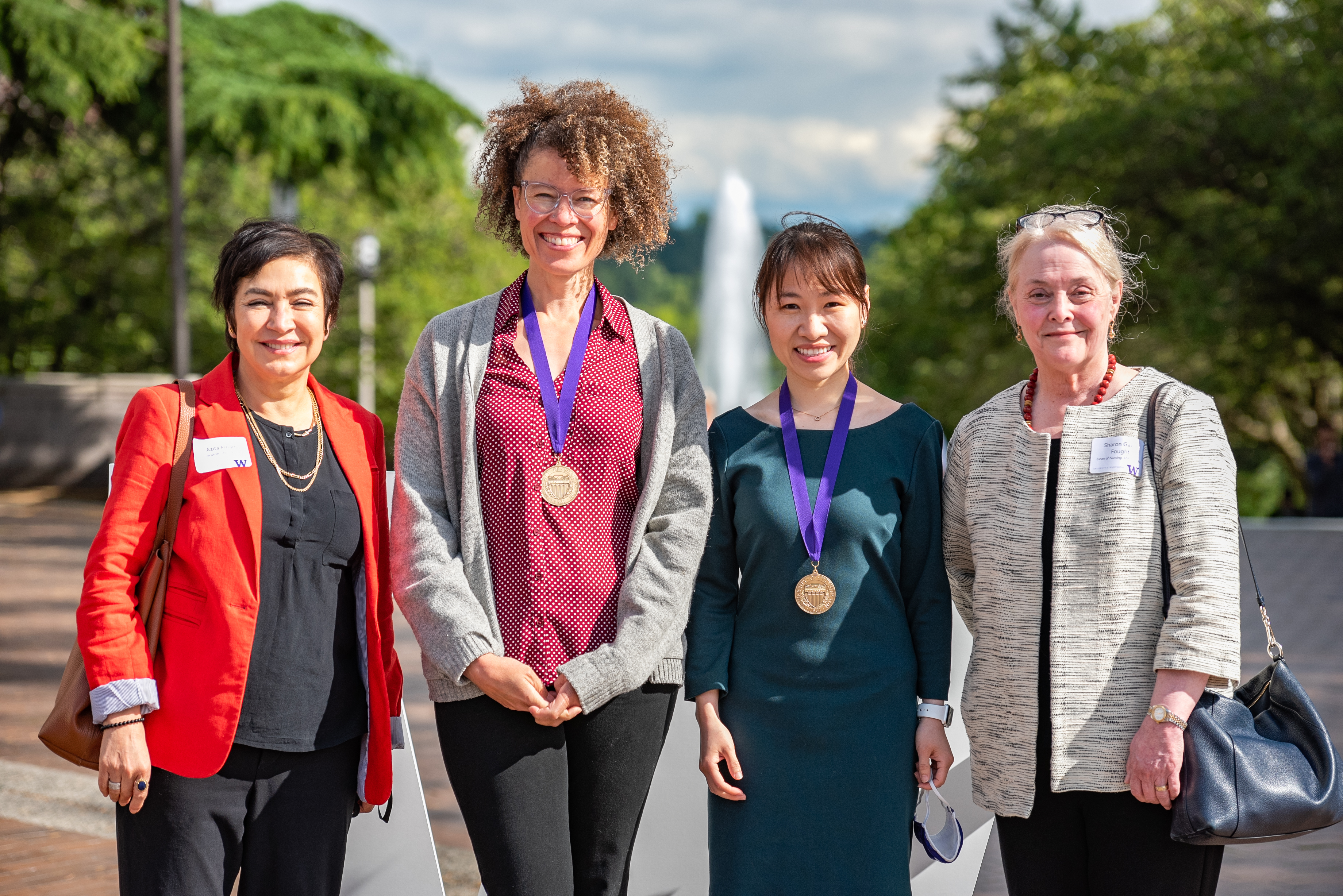 Barrington with her colleagues at the 2021 Awards of Excellence, where she received a distinguished teaching award. The award recognized the experiential learning opportunities in the classroom, as well as her student-focused teaching style.

Energized by the activism around her, she began to speak openly in podcasts and guest lectures about racism and how research has helped create and sustain it. “It’s possible to talk about the experience or impact of racism but not actually say the word ‘racism,’” she notes. “I could no longer do that.”

She also began to structure her classes around the experiences of Black and Indigenous students of color. Because many of her students were front-line workers and signing in from around the world, Barrington provided short recorded lectures and scheduled hour-long sessions for team work.

In her research, Barrington intends to continue partnering with marginalized communities and responding to their needs. For example, while her previous work had focused on eating habits and preventing obesity, a partnership with a Seattle support group for Black breast-cancer survivors changed her focus.

“They taught me that studying cancer screening is a strategy that’s far more impactful for rectifying these disparities,” Barrington says. “I’m a huge champion of community engagement and research, because the community knows their priorities.”

When Barrington became director of the Center for Anti-Racism and Community Health, she saw it as a natural next step.

Her vision for the center is clear: to improve community health by disrupting health policies and practices that align with white supremacy culture, a system that values and protects whiteness at the expense of other racialized groups. That disruption is vital, Barrington notes, because inequities will continue — in health and beyond — as long as opportunities and resources are not equitably accessible to all groups.

It’s a big task ahead of her, but Barrington sees it as an evolution of the same call to service she felt growing up and that first brought her to the UW.

“What brings me joy,” says Barrington, “is to champion the priorities of those who have experienced marginalization, and to mirror the strength of others — whether that’s students, faculty, staff or the communities I’m working with.”

WHAT YOU CARE ABOUT CAN CHANGE THE WORLD

When you support the Center for Anti-Racism and Community Health, you help address the root causes of racial health inequities and create lasting change.