Dr. Edwards Lange began her appointment as UW Tacoma’s chancellor on Sept. 16 and brings a wealth of knowledge and experience in higher education. Edwards Lange previously served as president of Seattle Central College where she championed student success, particularly for traditionally underrepresented students, and helped lead efforts to establish the Seattle Promise, which provides two years of free tuition at the Seattle Colleges to graduates of Seattle Public Schools. Due to her leadership at Seattle Central, Edwards Lange received the Washington Community College CEO of the Year award in 2020 from the Washington State Association of College Trustees, as well as Puget Sound Business Journal’s 2021 Director of the Year award.

Edwards Lange is no stranger to the UW, having served as the UW’s Vice President of Minority Affairs and Diversity from 2007-15 where she led the creation of the University’s first Diversity Blueprint. She also earned her doctorate in educational leadership and policy studies and master’s in public administration from the UW.

In her role as Chancellor, Edwards Lange will provide leadership on all UW Tacoma campus matters, including the construction of Milgard Hall. Scheduled to open ahead of schedule in winter 2022/23, the 55,000 square-foot building will house the fast-growing Milgard School of Business and new high-demand programs in civil and mechanical engineering. It will also allow for the expansion of UW Tacoma’s Global Innovation and Design Lab and a high-impact practices teaching space. The building will provide a flexible learning environment that promotes interdisciplinary innovation and community engagement. It also centers sustainable building resources with the primary structure formed by cross-laminated timber.

The construction of Milgard Hall and the creation of UW Tacoma’s School of Engineering would not have been possible without generous support from the state legislature. In attendance at the celebration was House Speaker Laurie Jinkins, Representatives Kelly Chambers and Mari Leavitt, and Senator T’wina Nobles. Thank you, legislators, for attending the celebration and your continued support of UW Tacoma and its success. 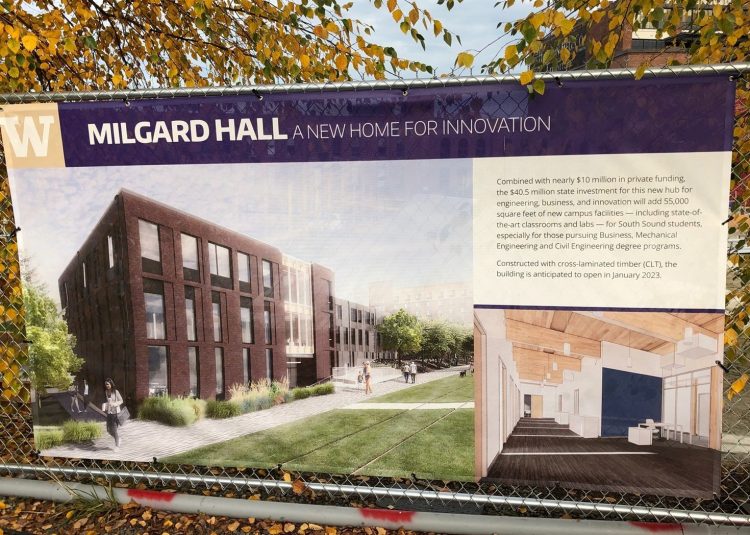