Syrup producers, tapping into the natural sugar sap that runs through Pacific Northwest bigleaf maple trees, are hoping to make Washington’s product as well known and sought after as the state’s wines.

Across Western Washington, foresters are tapping into a product that until recently was more commonly associated with New England or Canada: maple syrup.

Thanks to developing research and support from University of Washington scientists, landowners from Pe Ell and Quilcene to Acme and Sultan are hoping to maximize their land, help preserve the environment and take advantage of what, until now, has often been treated as a weed: bigleaf maple.

Syrup producers, tapping into the natural sugar sap that runs through Pacific Northwest native bigleaf maple trees, are hoping to make Washington’s product as well known and sought after as the state’s wines. They talk about the syrup’s flavors reflecting the nuances of the valleys, hillsides and glens where it’s produced, just like varietals of pinot noir and cabernet grapes.

“Made in Washington” syrups now enhance bespoke menus, and not just for pancakes — they also add a locally grown flavor to craft beers, cocktails and even salmon recipes. 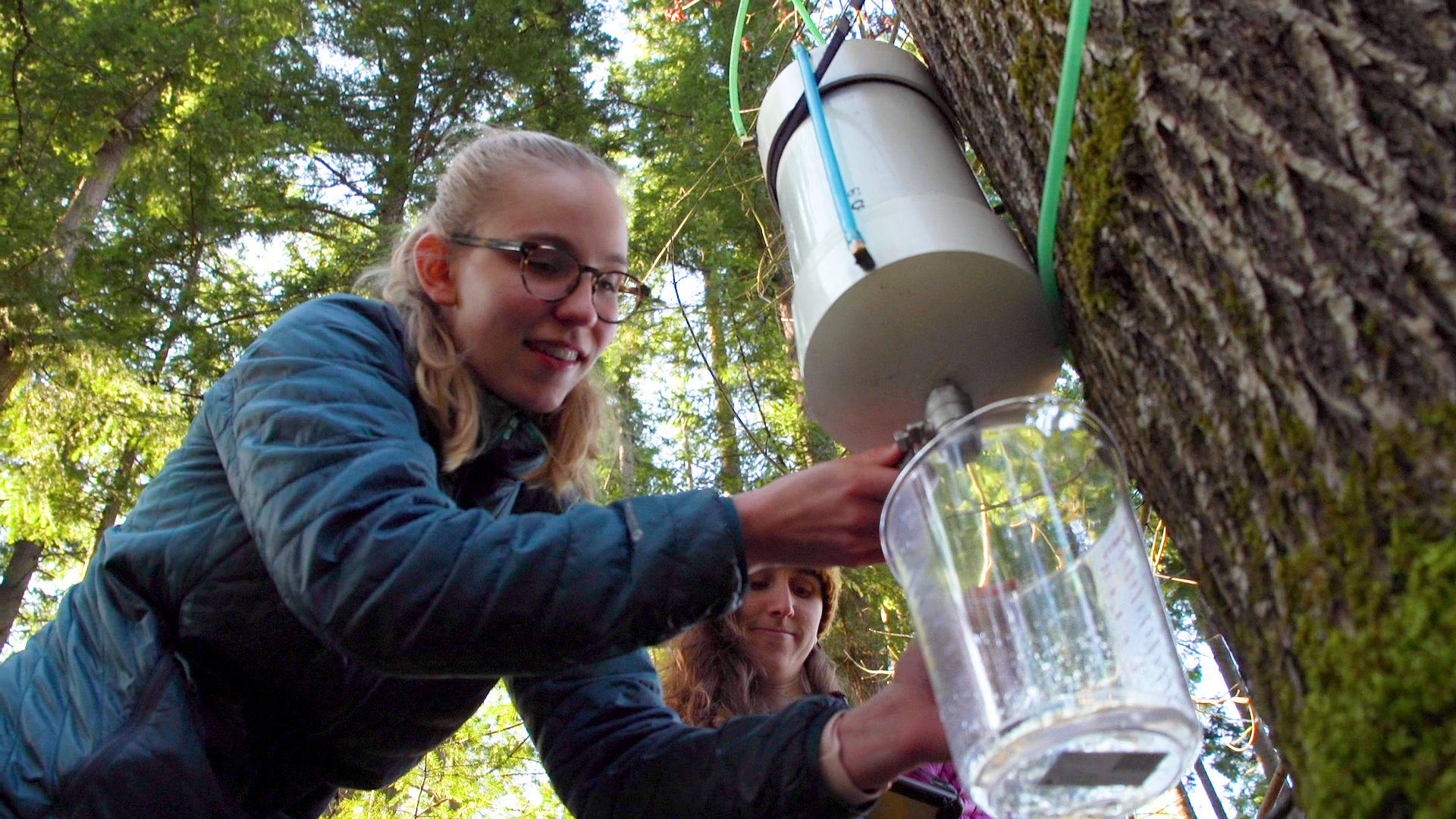 Staff at the University of Washington's Pack Forest collect sap from bigleaf maple trees at a test site. Maple sap is clear and tastes much like water.

“We think it’s got multimillion-dollar potential,” said Kent Wheiler, associate professor and director of the Center for International Trade in Forest Products in the UW School of Environmental and Forest Sciences.

The effort is a way for landowners to convert the bigleaf maple — once considered a nuisance — into a means of extracting value from their property. But as forest regulations have become more restrictive to protect native salmon habitat and water quality, bigleaf maple has flourished, especially in its preferred streamside locations known as riparian zones. Finding new ways to use the bigleaf maple helps increase the economic viability of small-forest holdings, helping owners keep their forests as forests.

Wheiler, along with other researchers in the College of the Environment, has spent the past three years working with landowners, scientists and the U.S. Department of Agriculture to assess the potential for maple syrup production in Western Washington, and see if it’s possible to build the infrastructure to create a robust marketplace. 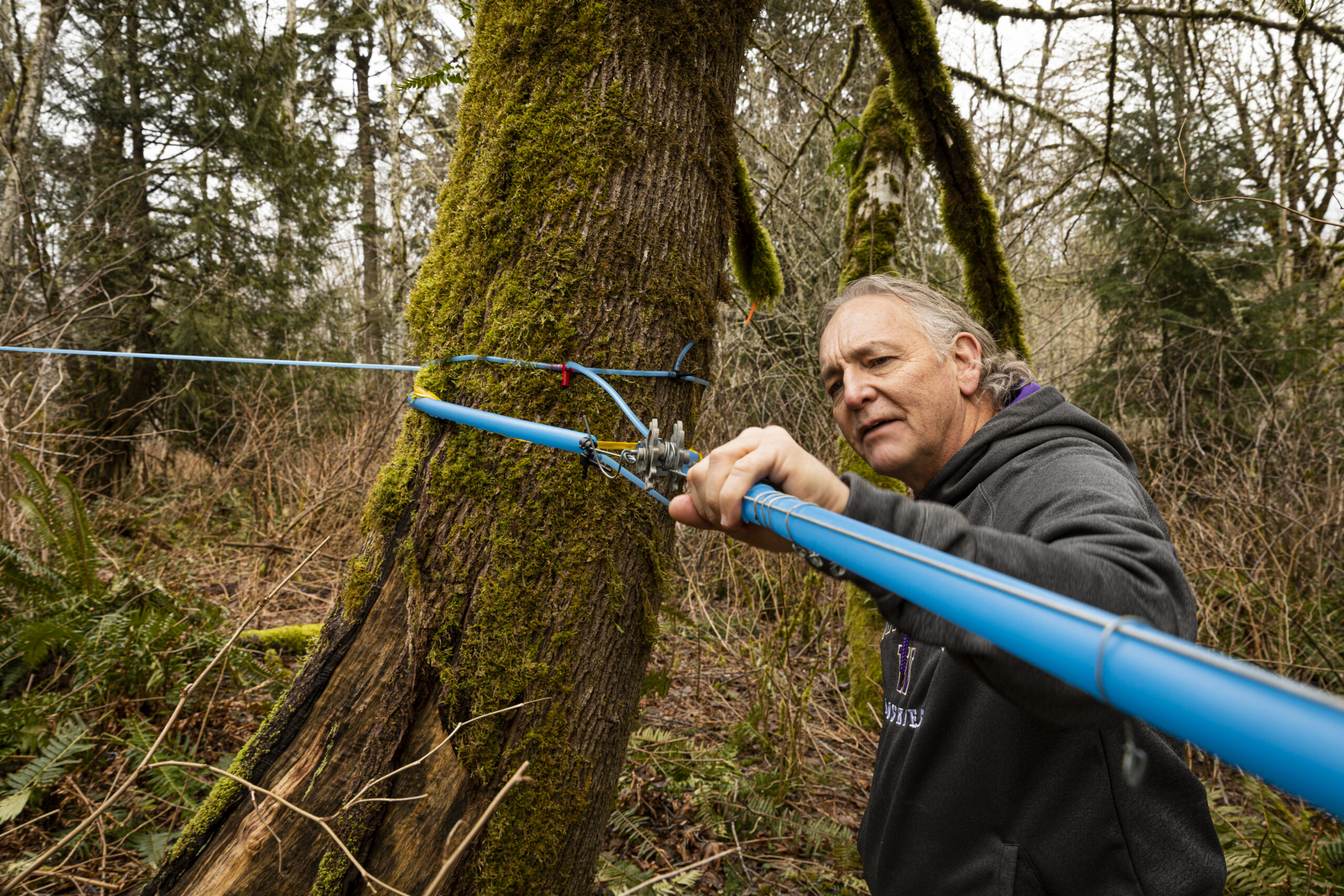 Getting pure maple syrup from a natural sap with 1% to 2% sugar content is more complex than the quaint notion of a bucket hanging from a Vermont maple’s trunk. In the Cascade foothills off Highway 2 on the way to Stevens Pass, one patch of forest is a maze of plastic tubing running among trees. That’s where Rich Weiss is giving syrup production a try on his family’s property.

The thaw following a period of freezing causes sap to flow. Tapping the tree collects about 5% of sap without causing any harm. As the sap drips into the narrow tubing — it’s 3/16 of an inch — a combination of gravity and a vacuum effect helps pull the sap along and increases the yield. The unrefined elixir moves through the carefully placed plumbing downhill into collection tanks.

That’s just the beginning of the process.

From there, the sap is sent through a reverse osmosis machine that begins to separate out the water and convert the liquid into something closer to syrup. Then the liquid goes into an evaporator where more reduction and caramelization take place through boiling. Finally, the Pacific Northwest syrup is bottled and ready for the table at anywhere from $2 to $4 an ounce. 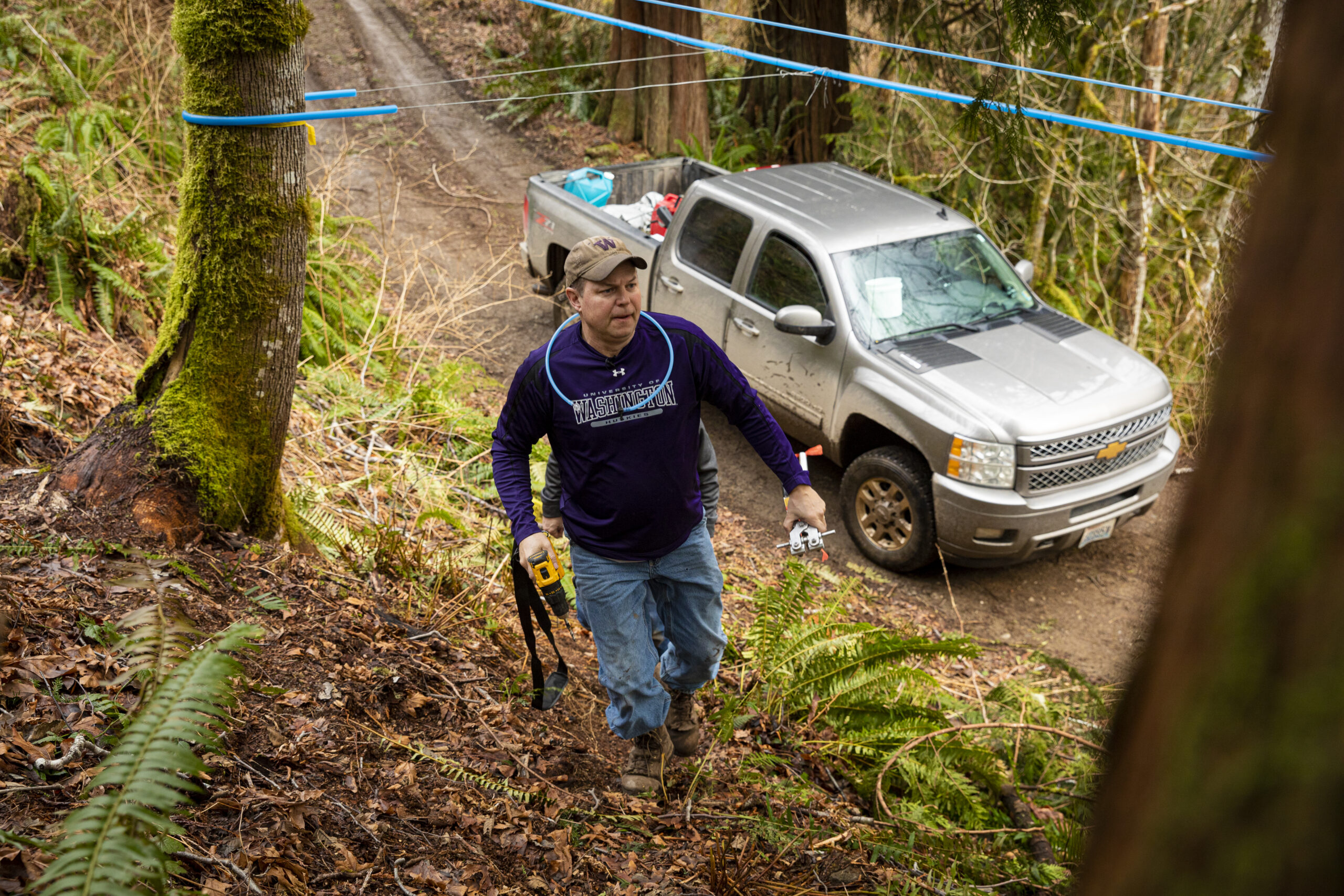 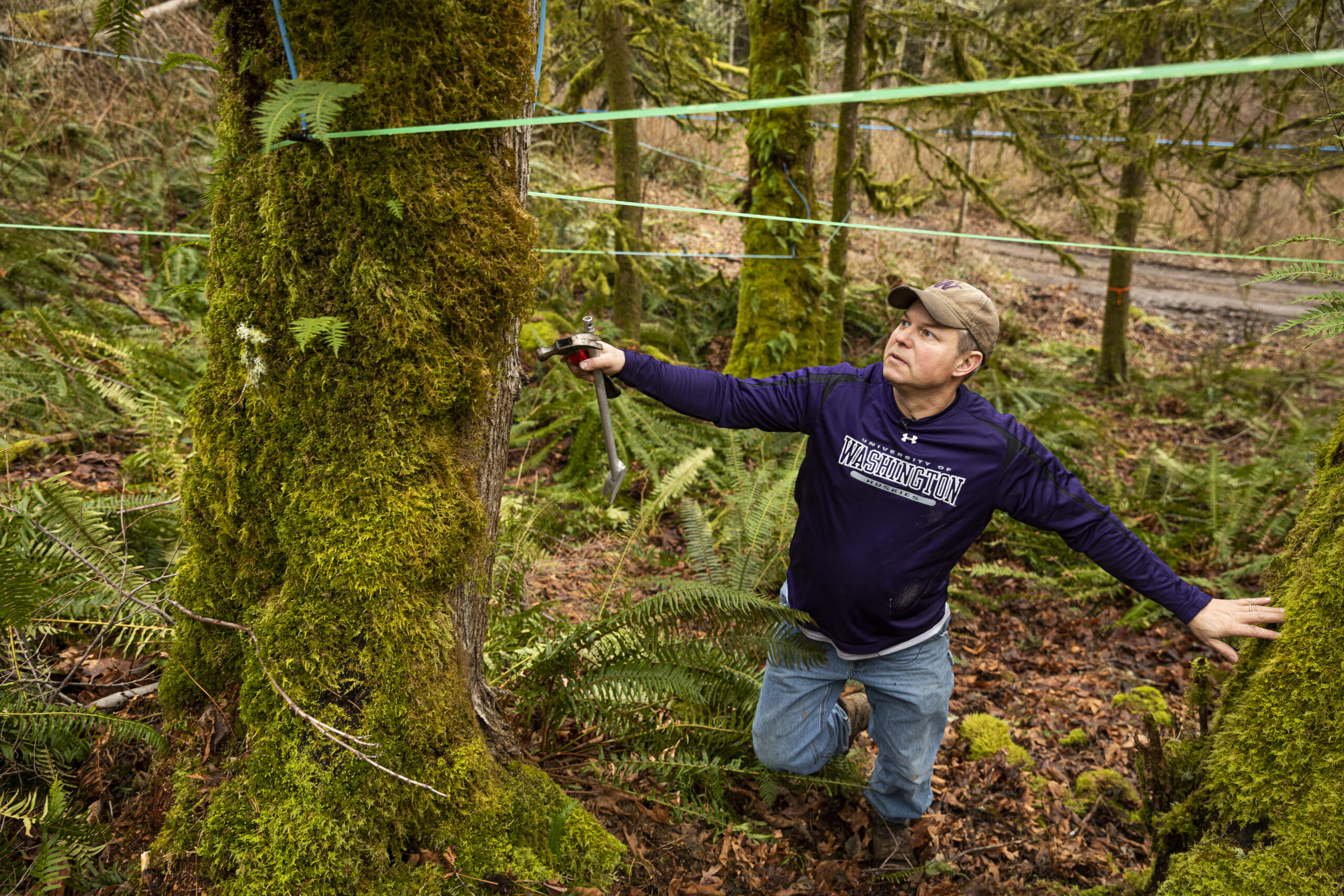 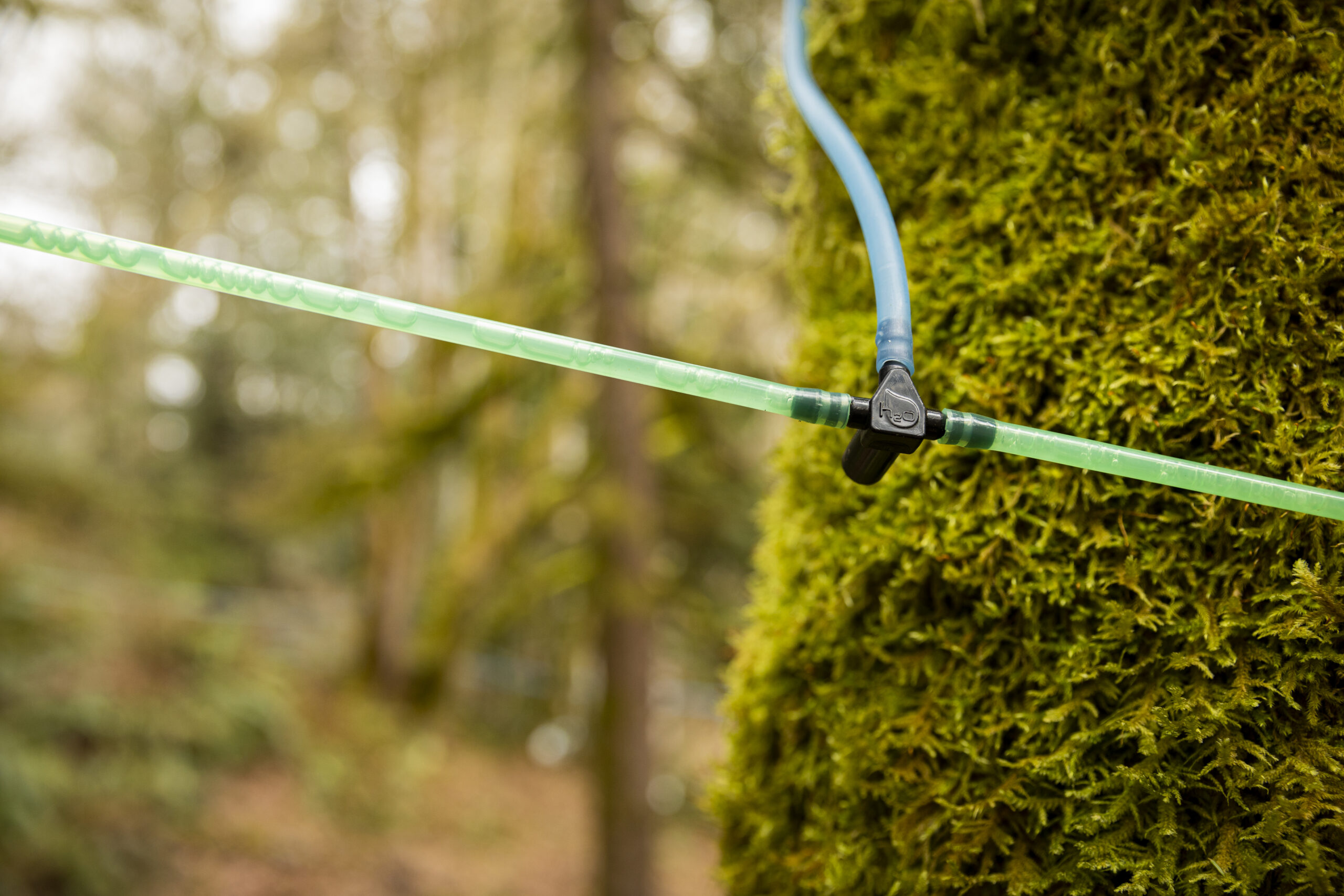 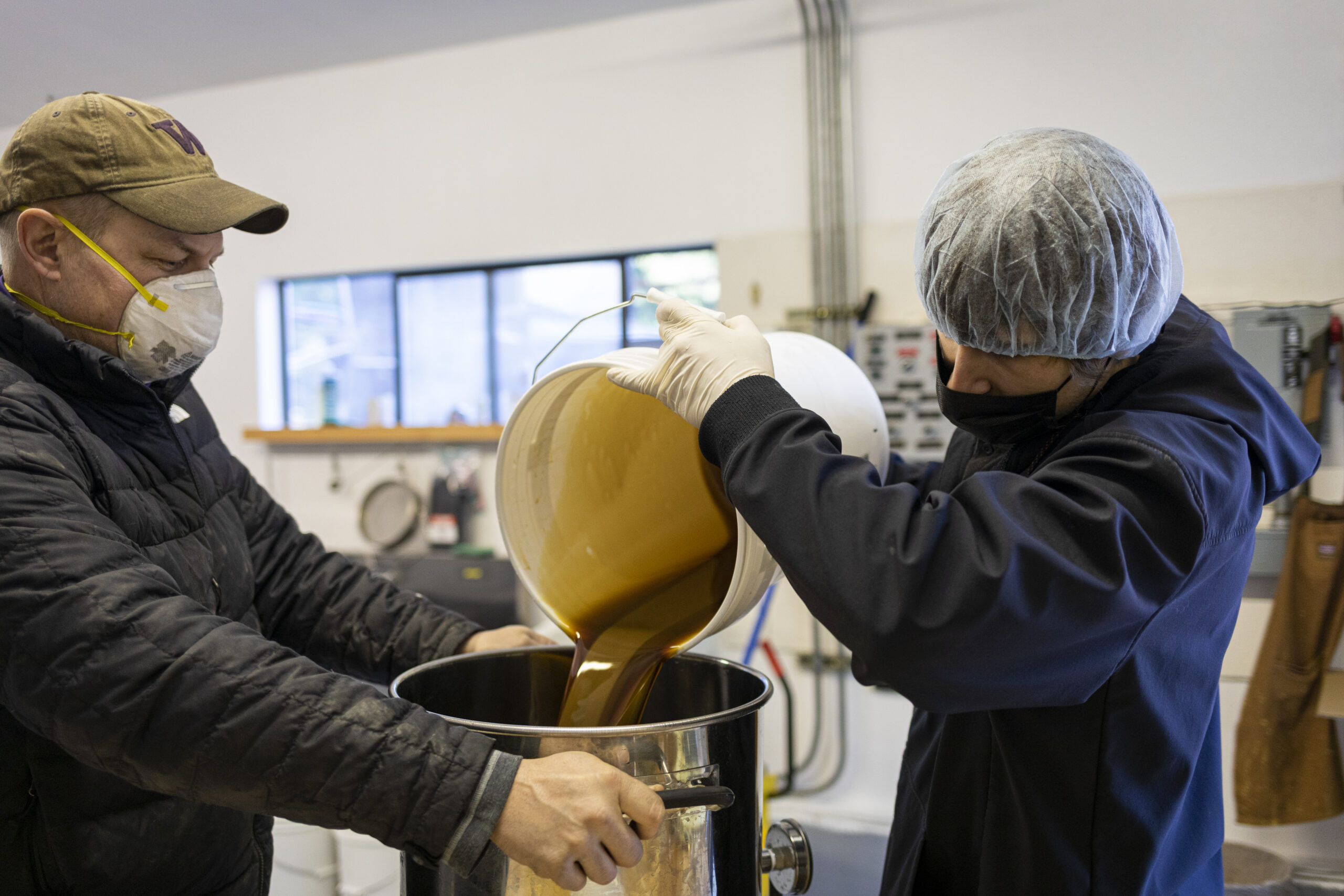 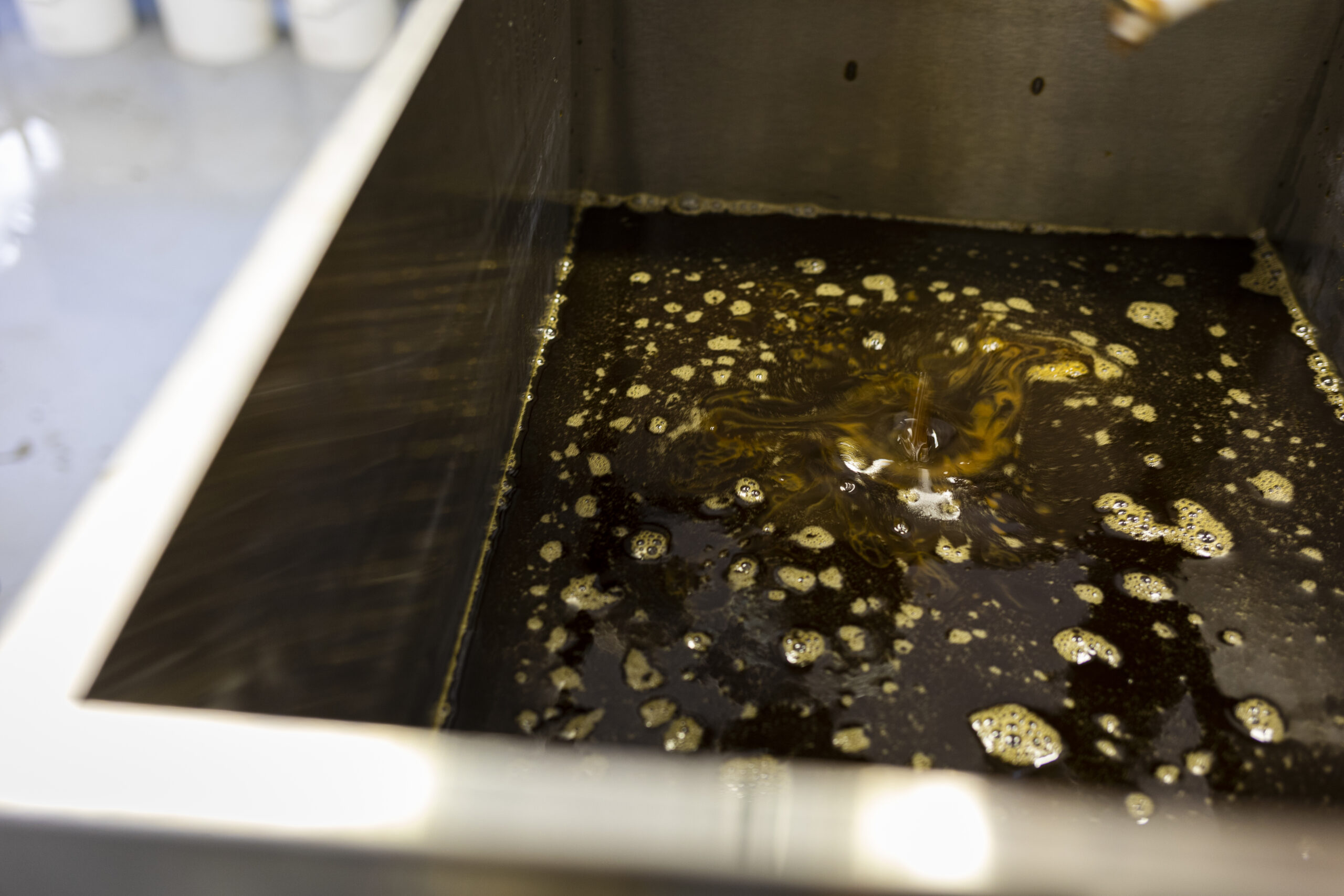 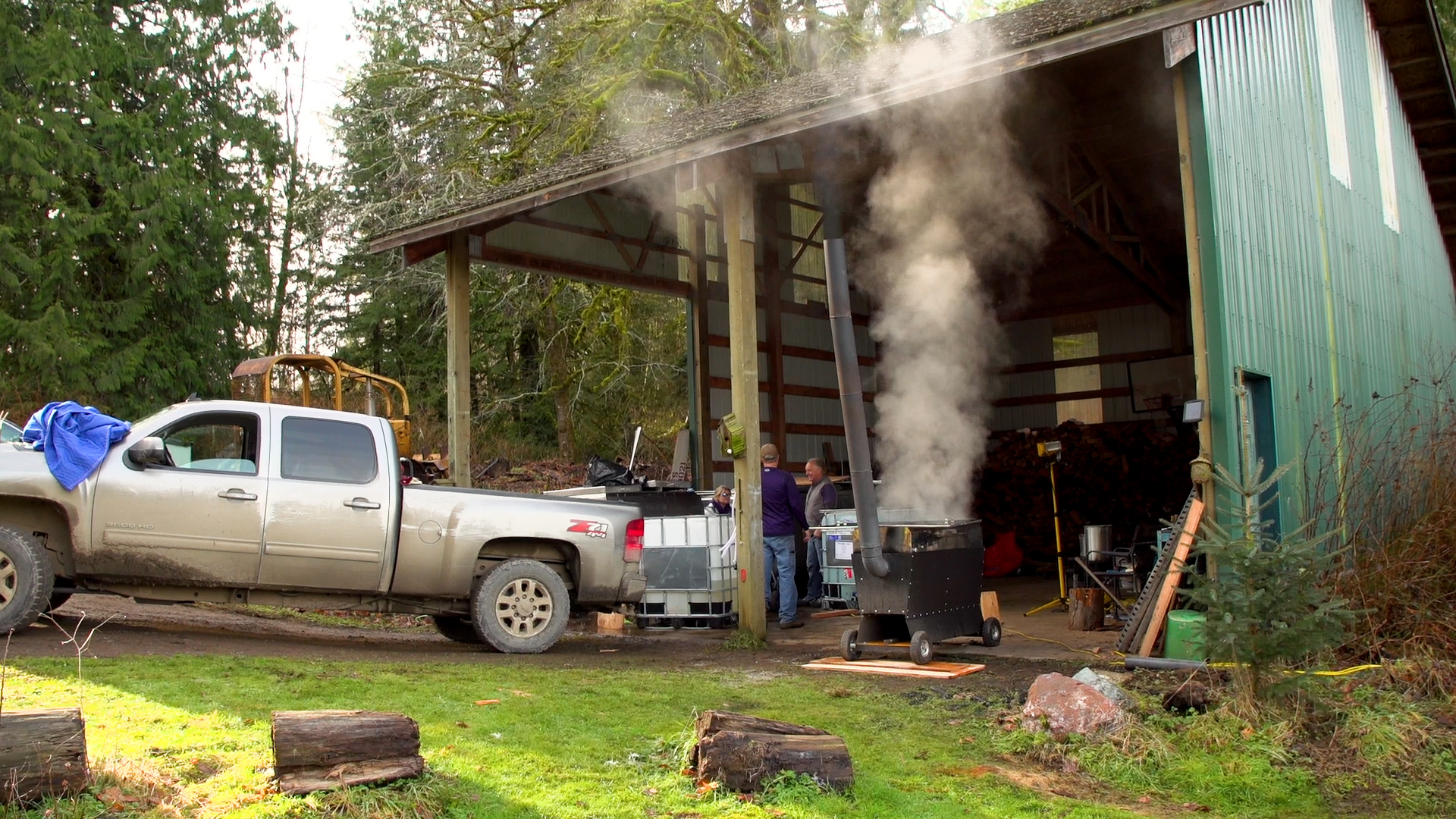 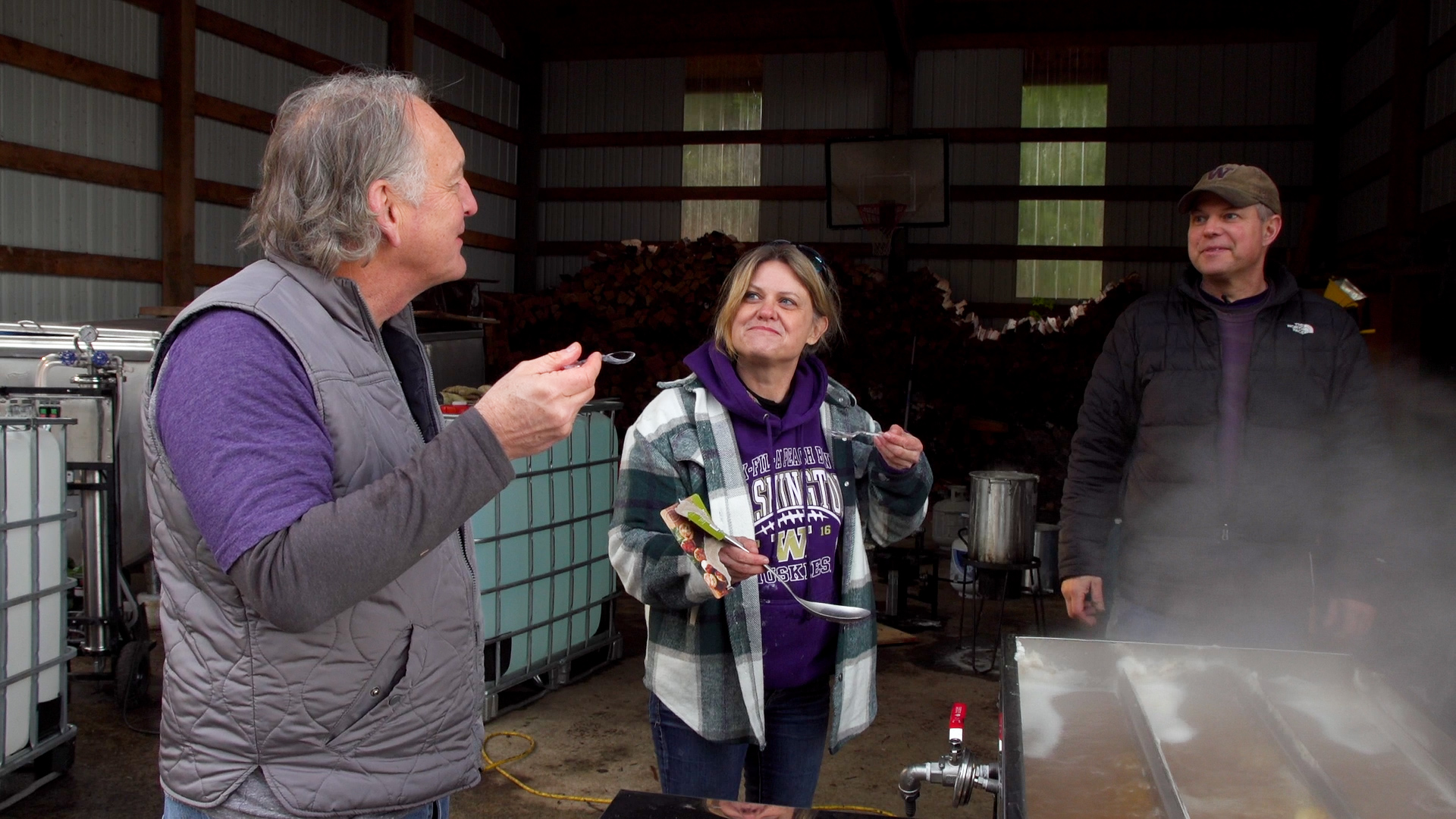 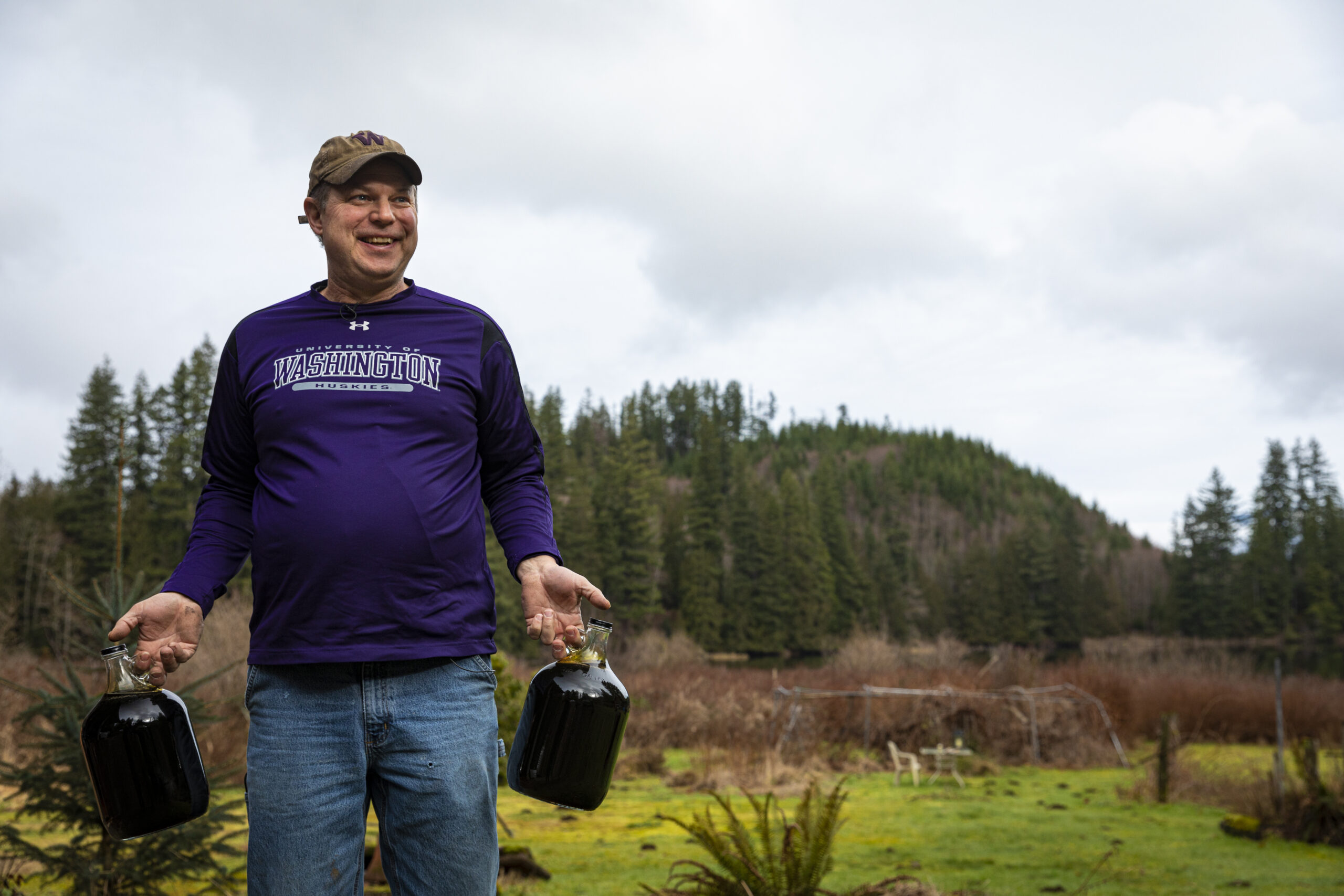 Photos above: Landowners across Western Washington are learning to collect and transform bigleaf maple sap into valuable maple syrup.

Weiss, whose family founded and later sold Buse Timber & Sales Inc. in Everett, is one of the Western Washington landowners who has tapped into bigleaf maple trees as both a hobby and a way to fully utilize property his family owns near Sultan. But he wouldn’t have known where to begin without the knowledge, resources and help made available by the UW.

Creating a maple syrup culture in the Pacific Northwest

Maple syrup wasn’t on Wheiler’s menu when he began work at the UW in 2017 after a 30-year career managing international forestry business operations around the globe. His main area of research and teaching is sustainable production and trade of wood products to protect and improve the lives of people, forests and the environment.

But in 2019, Wheiler was contacted by Mike Farrell, a former researcher at Cornell University, who is known as the go-to person in the maple syrup business. Farrell, who today runs a large, commercial maple syrup business in upstate New York and Vermont, told Wheiler about a U.S. Department of Agriculture grant that could support maple syrup exploration in Pacific Northwest forests.

“Everybody loves pure maple syrup,” Farrell said. “There’s a huge local food movement, and so to be able to have local maple syrup from the Pacific Northwest, it takes what is more of a commodity back East and makes it into a specialty, niche product.”

The hard freeze around late December 2021 would have been an ideal time for Weiss to begin tapping his family’s trees.

Weiss had to drill holes in his trees and string together the web of plastic tubing in the forest. He had to figure out how to find a container large enough to hold his unrefined sap — he ended up using a 1,500-gallon stainless steel milk tank from a dairy that closed years ago. And where to refrigerate the product prior to bottling? The Red Apple grocery store in Sultan offered up space in their walk-in fridge. 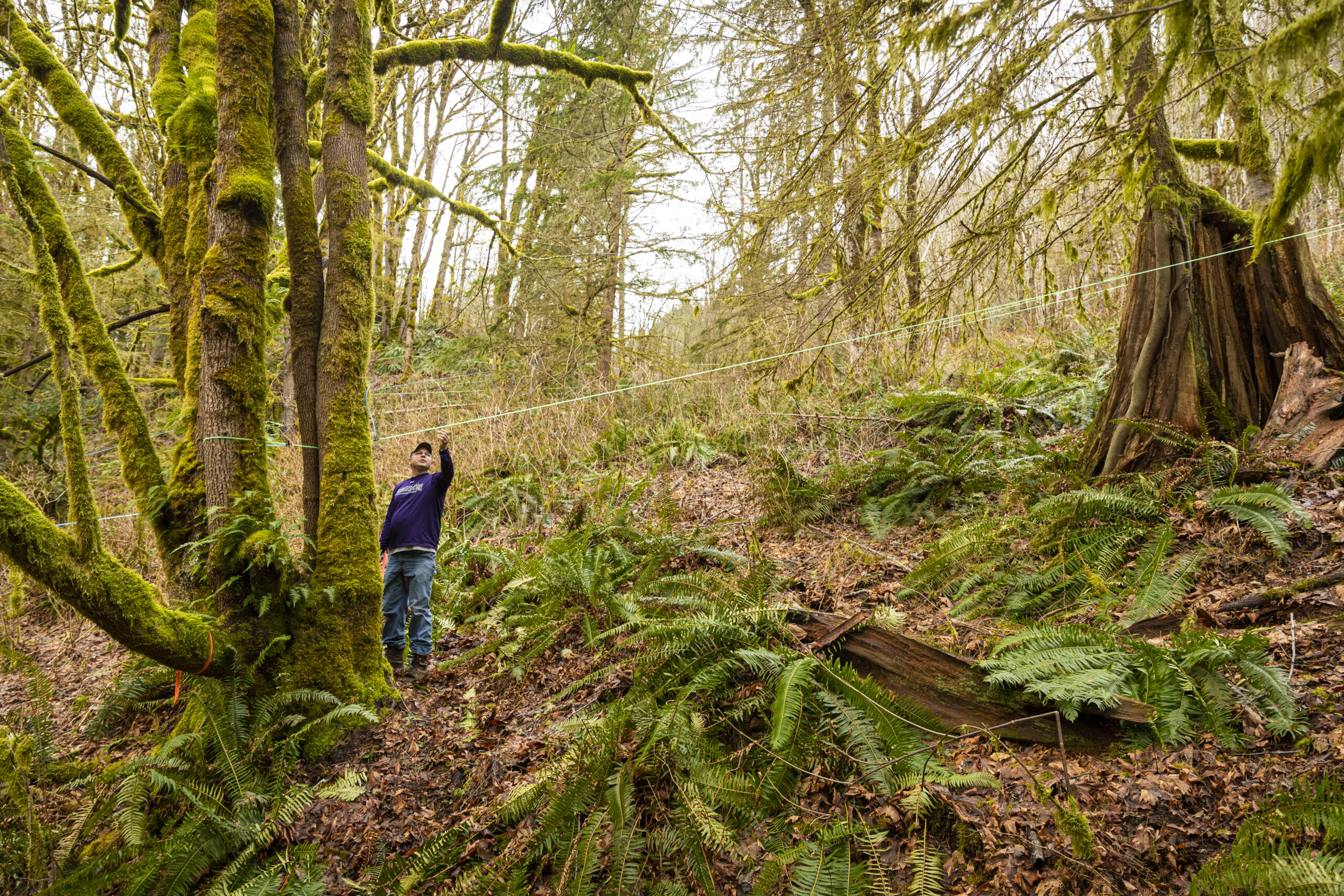 Figuring out the best way to collect and refine sap in Pacific Northwest forests is an important piece of what the UW is doing. Gone are the days of a metal bucket hanging from a tap. Instead, producers are testing a variety of collection methods.

Most of the UW work has gone into installing gravity-fed plastic tubing for landowners that’s strung between trees and leads to a central collector.

The initial grant funding enabled UW to buy tubing, help landowners install the plumbing and measure sap collection, Wheiler said. From there, a second grant funded exploration of how to find efficiencies in processing the syrup and build community among producers.

“A lot of people can collect sap on a smaller scale, but they can’t make the investment in processing,” Wheiler said. “So with the new grant money we’ve created a mobile processing unit.”

Producers like Weiss can collect and store the partially refined sap and either bring it to a community collection site, or the UW’s mobile processing trailer can come to them, Wheiler said. The mobile unit has a reverse osmosis machine, an evaporator and bottler. The UW also has a “sugar shack” — industry lingo for a syrup refinery — set up at the Pack Forest Field Research Station, the UW’s forest laboratory near Mount Rainier.

In May at Pack Forest, about 60 landowners, scientists, chefs and maple syrup enthusiasts gathered for the first Pacific Northwest Bigleaf Maple Conference. For three days, they shared knowledge, networked and focused on what has to happen next to build a maple syrup industry in the Pacific Northwest. 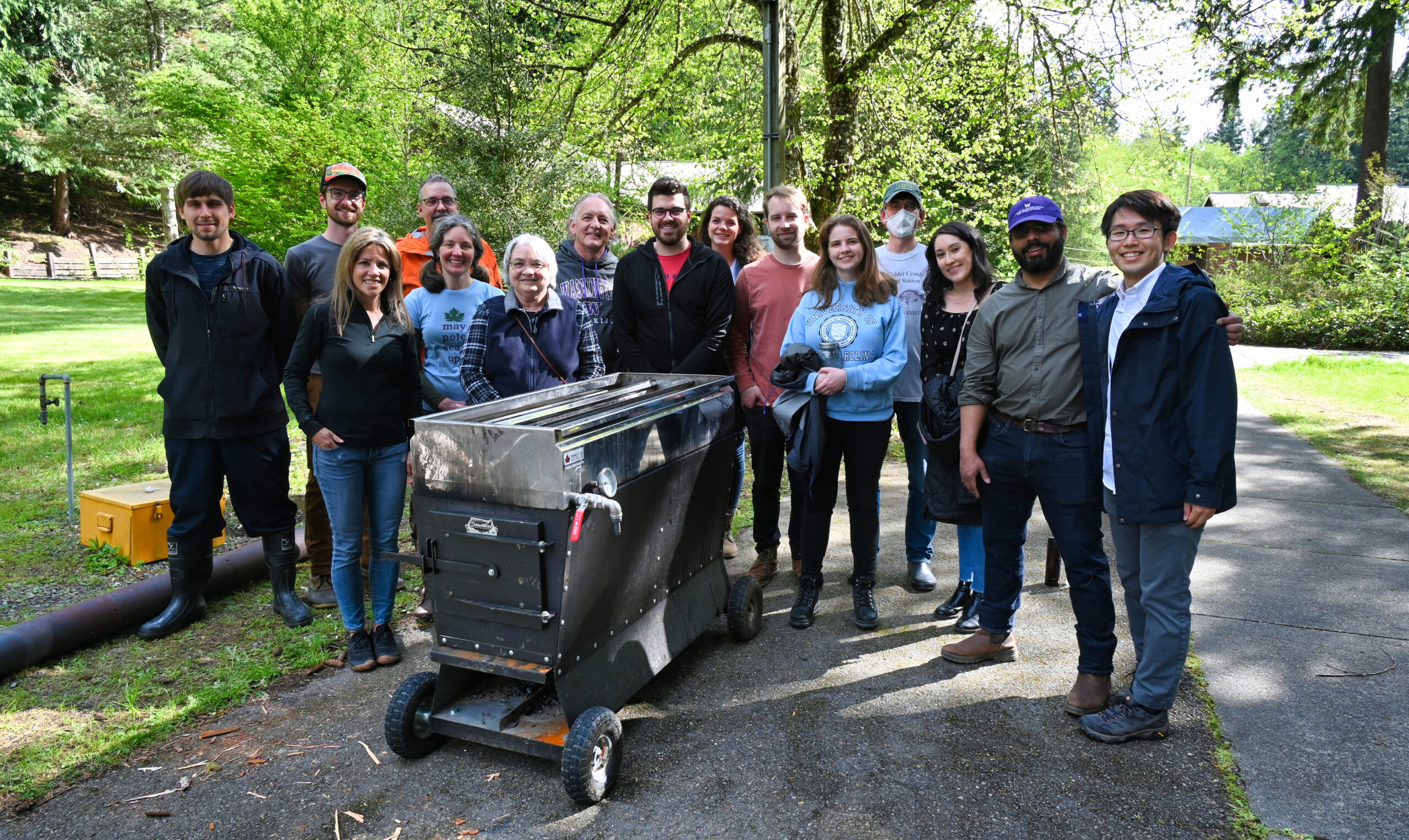 Researchers, syrup producers, graduate students, professors and syrup lovers from the region gathered for the first-annual Pacific Northwest Bigleaf Maple Conference in May 2022 at Pack Forest. They are gathered around a wood-fired evaporator for making syrup. Photo by Shinju Yokoyama

The UW now is collaborating with researchers at Washington State University, Oregon State University and the Washington Farm Forestry Association to advance the industry, continue with experimentation in collection and processing, and create a broader community of producers.

Currently, only a handful of syrup producers in the Pacific Northwest are licensed, have commercial kitchens and can produce retail-ready syrup.

Wheiler and his peers also are working with state legislatures in Washington and Oregon to implement regulations that would support the fledgling industry. For example, in Washington, early producers have not been allowed to use wood-burning evaporators to finish syrup. In Vermont and elsewhere in the Northeast and Canada, people often use wood-fired evaporators, because they find that the wood fuel is a low-cost and renewable biofuel.

Some producers also use oil or gas, and there are advantages and disadvantages to each type of fuel, experts say. The industry is so novel in Washington and the Pacific Northwest that food safety regulators haven’t yet adapted the rules to allow producers the greatest flexibility.

“We need to be consistent,” Wheiler said. “That’s the kind of thing we need to work with the food safety people and the legislature on to help get some better rules. But the ball’s in our court.” 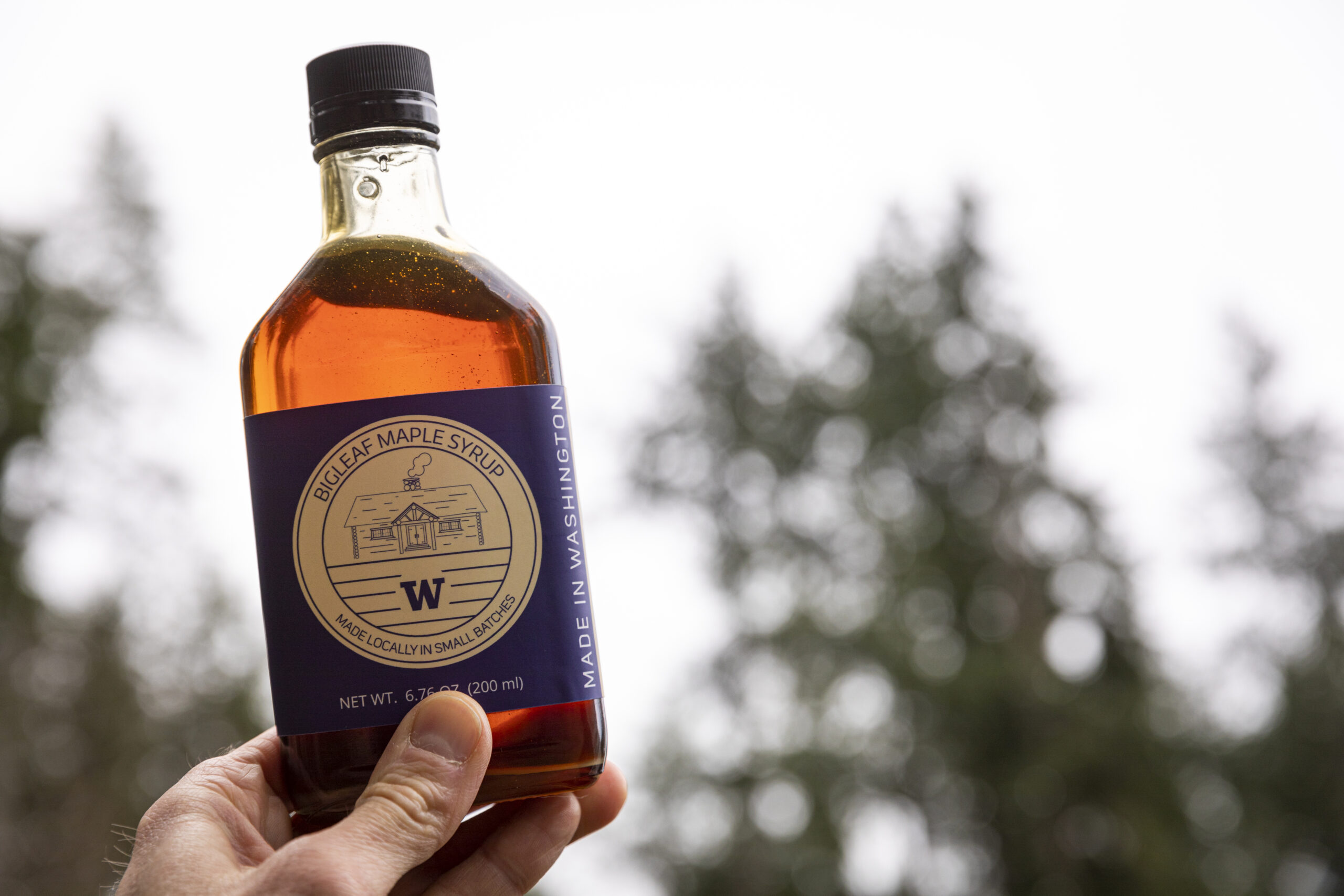 The UW’s Pack Forest has a license to produce commercial-grade syrup. Eventually, Wheiler hopes the UW can sell Pack Forest-harvested syrup at the University Book Store and elsewhere on campus.

“One of the best ways to develop the market is somewhat like the wine industry, and that’s what we’re trying to do where we preserve local nuances,” he said. “What we don’t want is all these small producers selling their syrup in bulk to one big packager who blends it all together.”

Neil’s Big Leaf, based in Acme, is at the forefront of Washington’s commercial production, retailing syrup for $42 for a 12-ounce bottle. That’s exponentially more expensive than Vermont syrup, but experts believe consumers will pay top dollar for local products.

Farrell, the maple syrup expert, said UW and others are still figuring out the economics, collection and production pieces.

“We’re making it possible for everybody to get involved in a way that’s really more sustainable and community building,” Farrell said. “It’s a win, win, win all the way around, for the forest, for the producers, for the consumers. Everybody wins.”

See related stories from The Seattle Times, NPR and Fox 13. 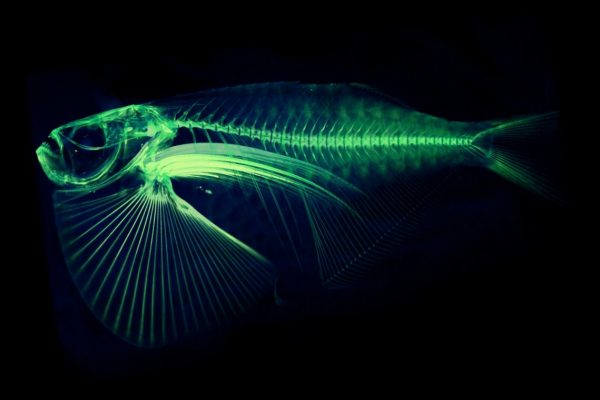 UW professor is digitizing every fish species in the world

Nearly 25,000 species of fish live on our planet, and a University of Washington professor wants to scan and digitize them all. 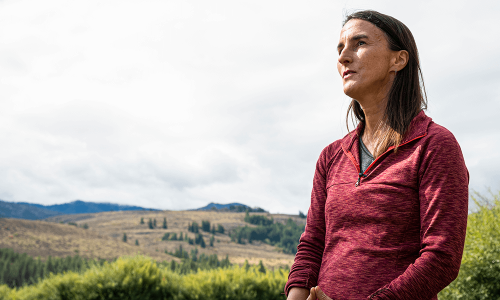 Agencies that are well practiced in putting out wildfires are now learning a new skill: how to set the spark and fan the flames. UW research and expertise are playing an important role in forest management across Eastern Washington, particularly in the state's Methow Valley. 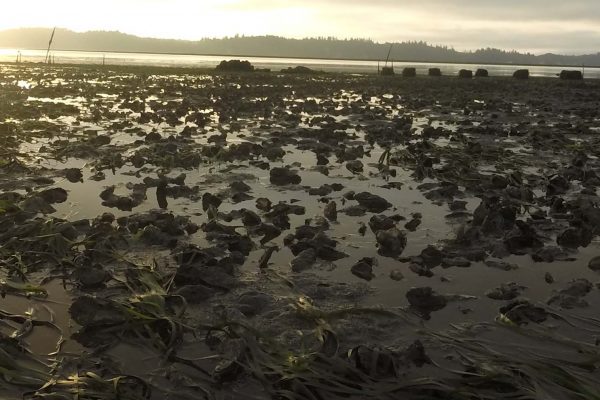 By area, tidal flats make up more than 50 percent of Willapa Bay in southwest Washington state, making this more than 142-square-mile estuary an ideal location for oyster farming. On some parts of these flats, oysters grow well, filling their shells with delicacies for discerning diners. But according to experienced oyster farmers, oysters raised in other parts of Willapa Bay don’t yield as much meat.

UW In the News