A twist of fate

Ayan Hassan’s life was changed by the Making Connections program — and then unexpectedly saved by one of the program’s founders.

Hassan’s life was changed by the Making Connections program, which is supported by donors to the Be Boundless — For Washington, For the World campaign.

Ayan Hassan, ’12, ’16, is laughing with a group of 20 young women eager to talk with her about science and engineering. Which classes should they take? What are the job options down the road? Should they start thinking about internships? They have a million questions, and the room is charged with energy and the buzz of many voices.

It’s a scene Hassan is used to. When she’s not managing new market expansion initiatives for Amazon, the University of Washington alumna volunteers with K–12 outreach programs, encouraging girls and all young people of color to see themselves as tomorrow’s engineers, doctors, scientists and computer programmers.

“When they think of engineers, they don’t think of someone like me,” she says, giving the group a warm smile. “I want them to see that there are Black women engineers.”

It was the UW’s Making Connections program that filled that role for Hassan as a teen, showing her what was possible for her own future. But it was a future that was nearly derailed.

“When they think of engineers, they don’t think of someone like me.”

Born in Somalia, Hassan emigrated to the U.S. as a child with her parents and five siblings. As a student at Seattle’s Garfield High School, she learned about Making Connections, a college readiness program offered through the UW Alene Moris Women’s Center. It turned out to be life-changing.

“Though supportive, my parents weren’t familiar with the American higher education system,” she remembers. “Making Connections opened the door to college for me.”

The program — supported in part by philanthropy, including contributions to the recent Be Boundless campaign — helps students from underrepresented communities in Seattle pursue science, tech, engineering and math (STEM) fields. Since it began in 2007, 100% of its students have been accepted to college. Making Connections was established by a group of local STEM professionals — dynamic, dedicated “founding mothers” determined to make STEM education and careers accessible to girls from low-income families without college-graduate role models.

Back then, Hassan didn’t know that one of those founding mothers would be instrumental not only in getting her to college, but in saving her life. 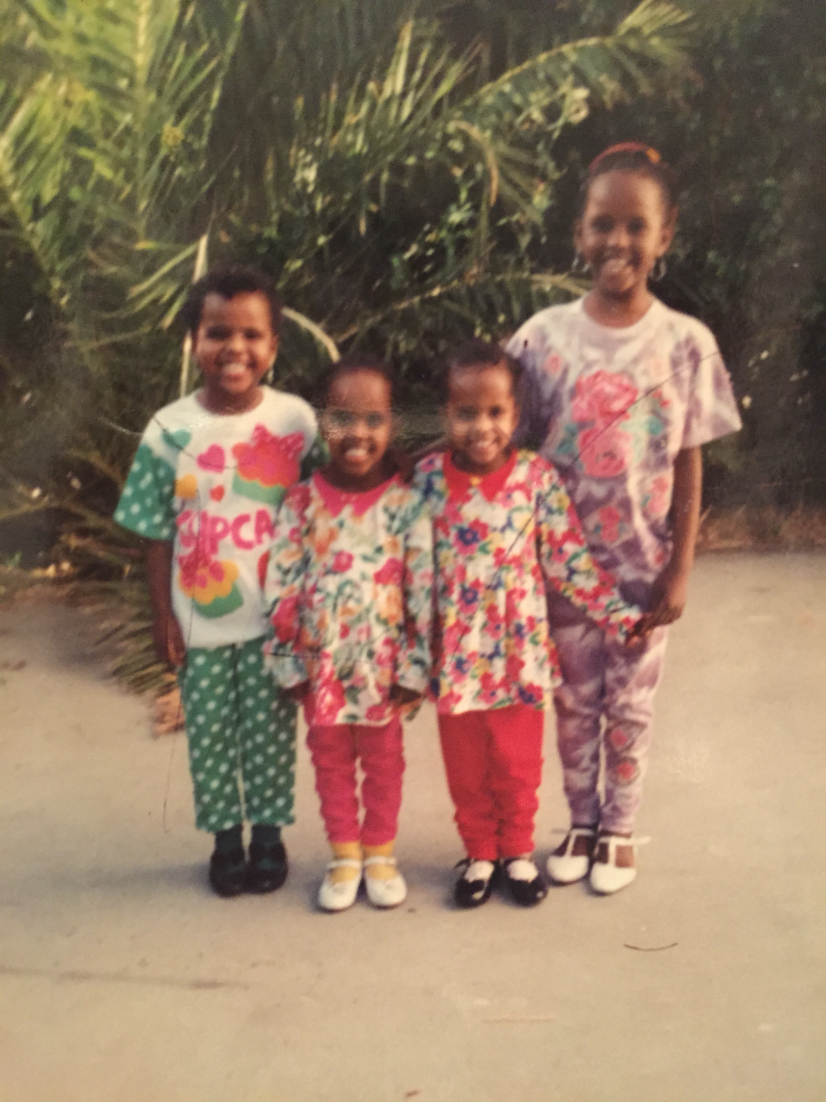 Hassan (far left) around age 5, with her sisters

Hassan came to the UW to study medicine. But after meeting students from the UW chapter of the National Society of Black Engineers, she switched gears. “Learning what the organization stood for — increasing culturally responsible Black engineers who excel academically, succeed professionally and positively impact the community — changed my point of view. Engineering became an option I wanted to explore.”

She decided to major in industrial and systems engineering, and she stayed involved with Making Connections as a volunteer. She was ready for more challenges. After graduating in 2012, Hassan accepted a job at Boeing — where she’d interned the year before — as an industrial engineer on the 777 program. She earned a UW master’s degree in supply chain transportation and logistics while working full time, then was hired as a process engineer at Amazon.

But just a month later, at age 28 and with a career on the rise, Hassan faced the biggest challenge of her life: She was diagnosed with stage 2 breast cancer.

Dr. Patricia Dawson, a breast cancer specialist, surgeon and UW clinical assistant professor, led Hassan’s care team at Swedish Hospital. “I loved her the moment I met her,” Hassan says. “We just clicked. I felt grateful that she was on my side, and I didn’t even know her.”

Hassan wasn’t yet aware of an amazing coincidence: Dawson was a founding mother of Making Connections.

“I couldn’t believe it,” recalls Hassan, who learned about the twist of fate from Making Connections Program Manager Senait Habte. “This woman helped establish the program that shaped the course of my life, and now she was helping me navigate a way through cancer.”

Hassan assembled a rigorous treatment plan with her care team, including family, friends and the Cierra Sisters — a support group for African American breast cancer survivors. “The engineer in me couldn’t be still,” she says. “I put all of my project management, research and communications skills to work for my health.” She went through aggressive chemotherapy, a lumpectomy and 35 rounds of radiation therapy.

“I’d been fighting hard, and my body, my spirit, my mental state — I was exhausted,” Hassan recalls. “I asked Dr. Dawson, ‘When will I ever be able to say I’m cancer-free?’ She looked at me and said, ‘You can say it right now.’”

The surgery and treatments had successfully removed the cancer.

“Everything inside me just let go,” Hassan reflects. “As soon as she said those words, I broke down in tears. I praised God and hugged Dr. Dawson and my sister Anisa.” 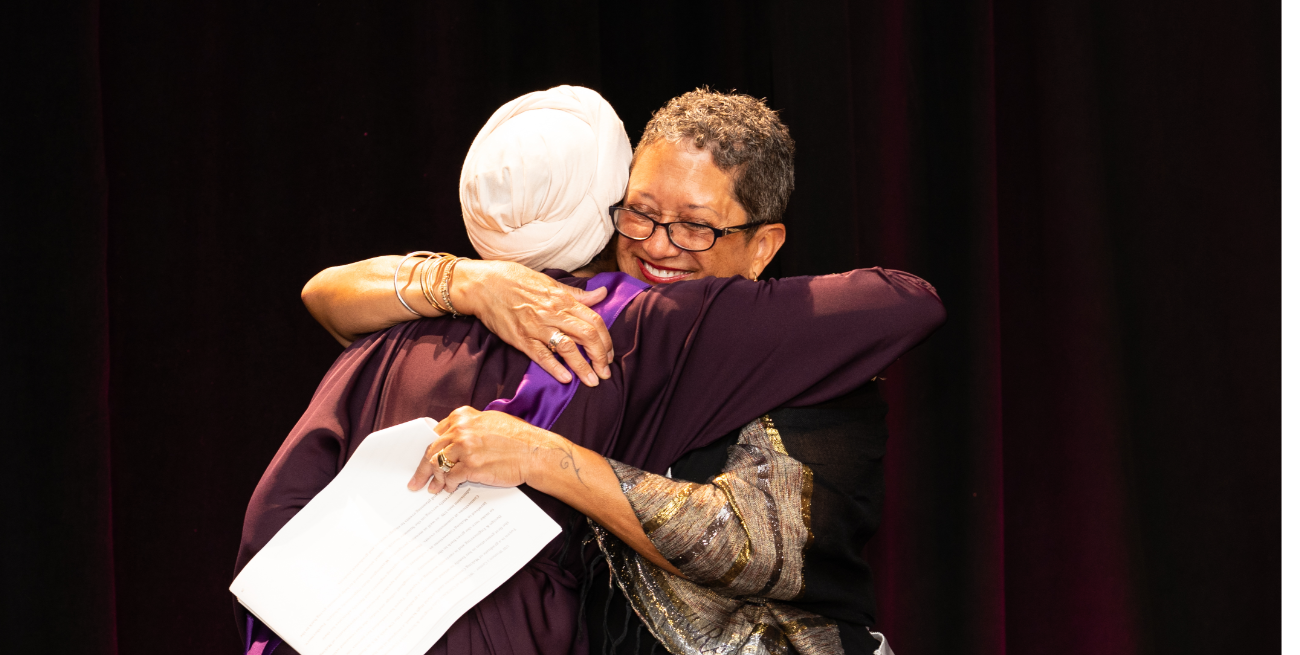 Dawson, one of the “founding mothers” of Making Connections, presents Hassan with the UW Women’s Center’s 2019 Alumna of the Year award.
A pioneer in breast-cancer treatment in the Puget Sound region, Dawson authored the book “Forged by the Knife,” about Black women’s experience in surgical residency training. Dawson has been a leader in health-care equity, including decades of service on the advisory board of The Cross Cultural Health Care Program, a nonprofit organization advancing health-care access. In 2018, she became the UW Medicine medical director for health-care equity.

Though Hassan was excited to return to work after her 10-month leave of absence, something had shifted. “I reflected a lot while going through treatment,” she says. “Academics, career and community had been my guideposts through life, and I began asking myself how I could help build them for others.”

Last year, the Women’s Center honored Hassan with its Alumna of the Year Award. Dawson, who became UW Medicine’s medical director for healthcare equity in 2018 and has served on the Center’s advisory board since 1993, presented it to her.

“I felt like I should’ve been the one giving her an award,” Hassan recalls. “She saved my life. She was the reason I was able to be there at that moment and the reason I’m doing what I do today.”

Inspired by her experiences and by women like Dawson and the Cierra Sisters — whom she still visits at the group’s meetups — Hassan realized her passion for paying it forward.

Hear Ayan discuss Making Connections, discovering she had cancer, and how Dr. Dawson saved her life:

Making Connections is a program for underrepresented minorities and paved the way for us to get connected to higher education through things like SAT prep courses, or just telling us about scholarships available, allowing us to meet admissions officers and even just giving us a space to ask questions about college. I know we didn’t have that growing up as a first generation immigrant to this country, my parents didn’t know anything about college. So Making Connections was that program for me, where I can just ask all the questions and someone was there to answer them. I wanted to learn as much as possible so I could help my siblings. And I got diagnosed July, 2017. I was just watching TV. And then a thought had entered my mind to give myself a check and I felt something like hard. And I was like, this is something I have to go get checked out.

So I went to go get the biopsy probably like a week later they called me. And the first thing the guy asked me was like, are you driving? I knew immediately there was something wrong. And so I went, I ran looking for a conference room so I can take the call privately and not cry if I needed to. And he said your results came back positive for cancer. And I had just froze cause I was like, Oh my God, I didn’t know anybody who had a cancer. I didn’t drink, I didn’t smoke. I was really active. I was healthy, but cancer doesn’t care when it shows up, you have no choice, but to try and fight back. So I believe the first person I met with was Dr. Dawson. Like one of the founding mothers of making connections technically helped me in high school. And then now she’s helping me by saving my life.

Hassan rings a bell at Swedish Hospital to mark the successful end of her cancer treatment. 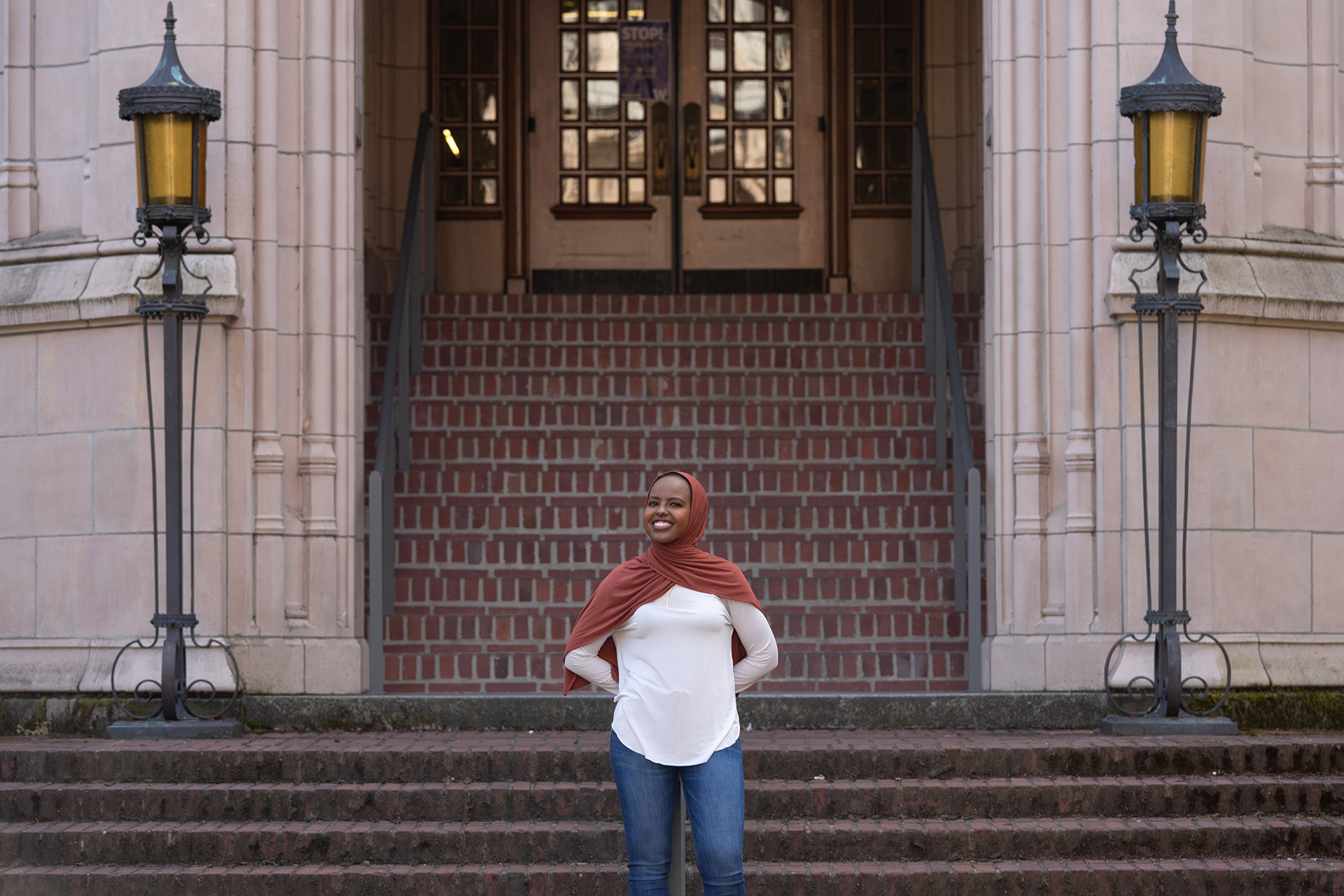 When you support programs like Making Connections, you help encourage young women to pursue higher education in STEM fields.