Seattle is reimagining and creating a living urban waterfront — building a healthy future for the city’s people, sea life, culture and economy. The UW has been part of the project from the start.

Seattle’s waterfront renewal is one of the region’s most ambitious and innovative undertakings since the Seattle World’s Fair transformed the city in 1962. Finally reconnecting Seattle’s waterfront to its downtown, this $750 million renovation and restoration will create a network of public parks, cultural celebration spaces and an expanded aquarium — while building a sophisticated, seismically sound, salmon-friendly new seawall. Decades of work and thousands of people — including University of Washington scientists, faculty and alumni — have contributed to transforming 17 waterfront blocks into welcoming walkways and scenic parks cradled between the city’s sparkling skyline and the Puget Sound and Olympic Mountains. From research and history to urban planning, ecology, engineering, art, philanthropy and beyond, the UW has been integral to this monumental civic project. 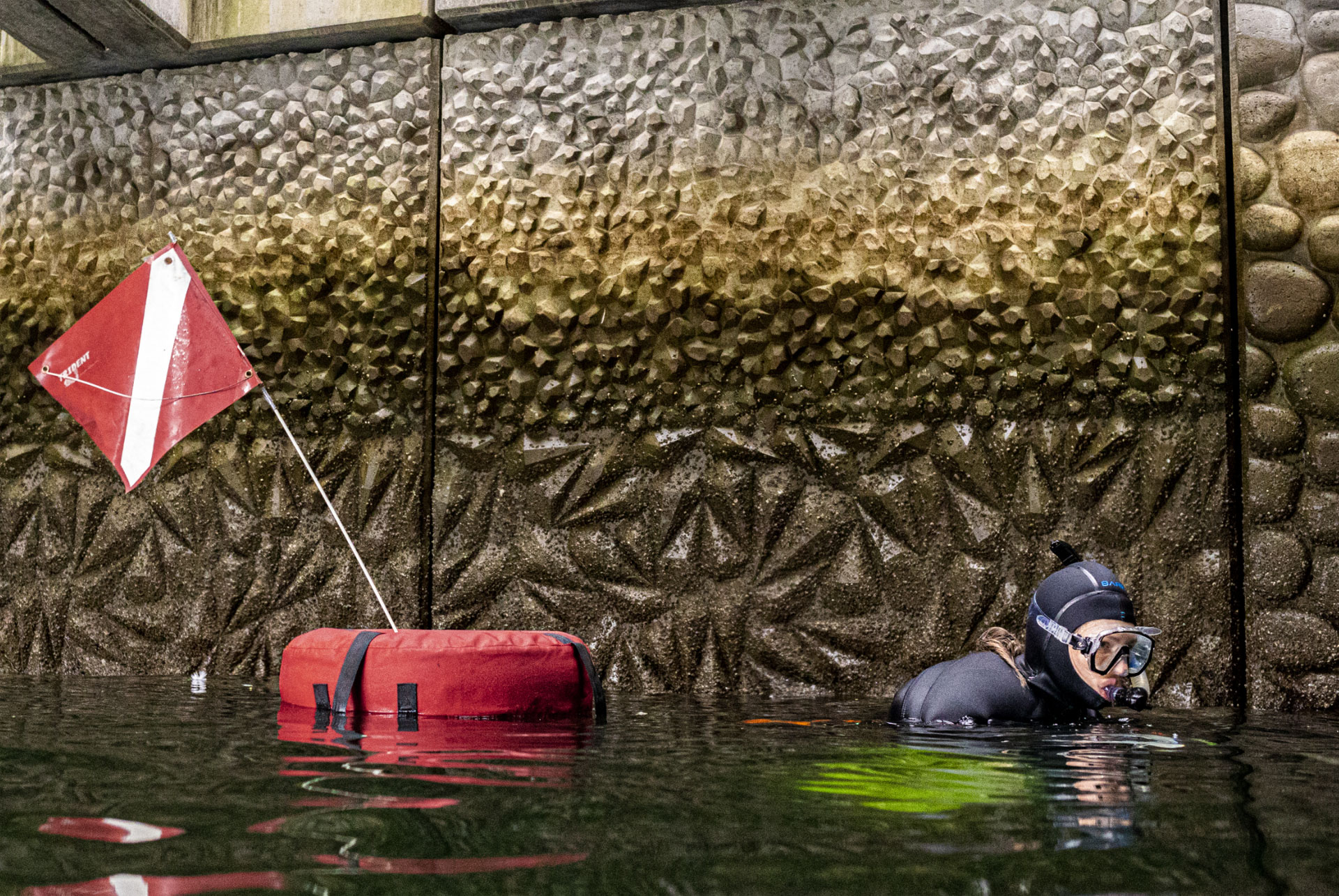 Visitors strolling the walkway above the waters of Elliott Bay might be surprised to know they’re treading over one of the world’s largest habitat-friendly urban seawalls. Not only does the 7,000-foot-long structure meet seismic standards, protect Seattle from storm surges and serve as a foundation for the waterfront piers and public attractions, it also demonstrates how city planners can work with scientists, artists and businesses to improve an urban landscape for many different stakeholders — including several species of Pacific salmon. The south end of the wall meets a new habitat beach, enhancing the salmon corridor with rocks, nearshore vegetation and a small stretch of sand and shells for the public to enjoy.

The new wall replaces a crumbling concrete structure, parts of which were built on wood pilings in the 1910s. Experts from across the University contributed to the new wall’s planning and design: Research scientist Jeffrey Cordell brought his expertise on fish habitat to help design textured panels that protect small sea life. With funding from the Washington Sea Grant, UW scientists worked with the city to install and monitor test panels to refine the design. Glass bricks were embedded in the sidewalk above to bring in light, and texture was added to the wall and habitat shelves to foster vegetation growth. The University continues to study the seawall with a 10-year monitoring project led by Jason Toft, head of the UW Wetland Ecosystem Team. The new wall carefully addresses seismic concerns and sea level rise, guided by research from the UW Climate Impacts Group.

Top: A researcher from the UW Wetland Ecosystem Team studies how well the new seawall protects salmon and the organisms that feed them. Bottom left: Artists' cardboard model of the seawall. Bottom right: Working with aquatic scientists and engineers, seawall artists Laura Haddad and Tom Drugan developed a concrete texture that mimics the mussels, barnacles and other organisms the wall will shelter.

A star feature of the Seattle Waterfront project is a $160 million aquarium expansion: the Ocean Pavilion. When the Seattle Aquarium was built in the 1970s, it was a municipal project designed to entice visitors to a waterfront that had been an industrial site. The new building will add 48,000 square feet to accommodate more visitors and offer more exhibit space, including a 362,000-gallon, two-story habitat featuring tropical species from the Indo-Pacific. The expanded aquarium will house apex predators like sharks and rays as well as fish, corals and other marine life. The pavilion will be topped with a public park offering panoramic views of the waterfront and Puget Sound and connecting with Overlook Walk, which links Pike Place Market to the waterfront.

Today’s Seattle Aquarium has a longstanding relationship with the UW: Its board includes UW faculty and alumni; its current CEO and president is alumnus Robert Davidson, MBA ’00; and its 850,000 annual visitors can learn about UW insights and research in many of the exhibits. And with support from the National Science Foundation, the UW works with the aquarium to engage the public in learning and research via Ocean Learning Communities. 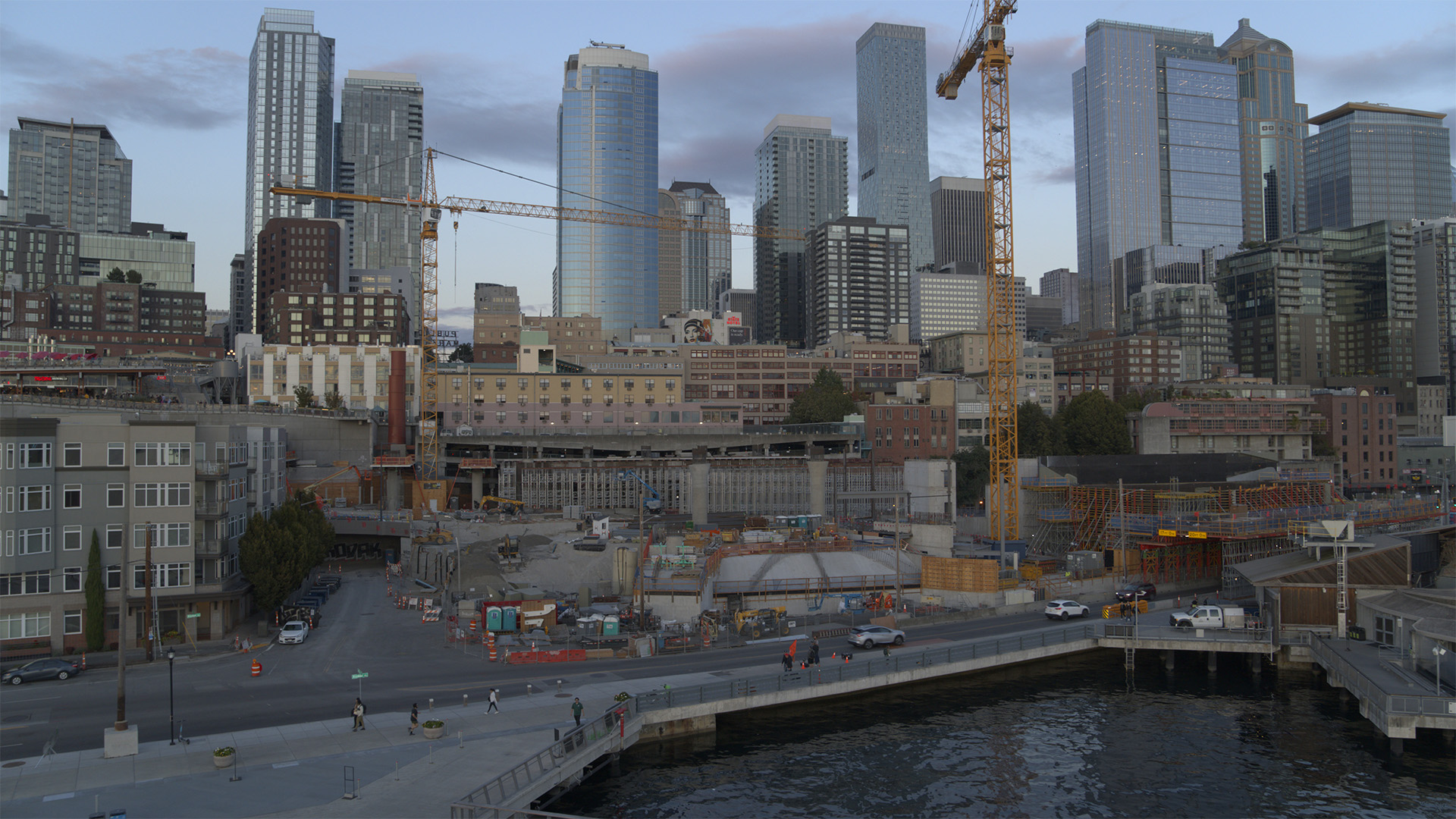 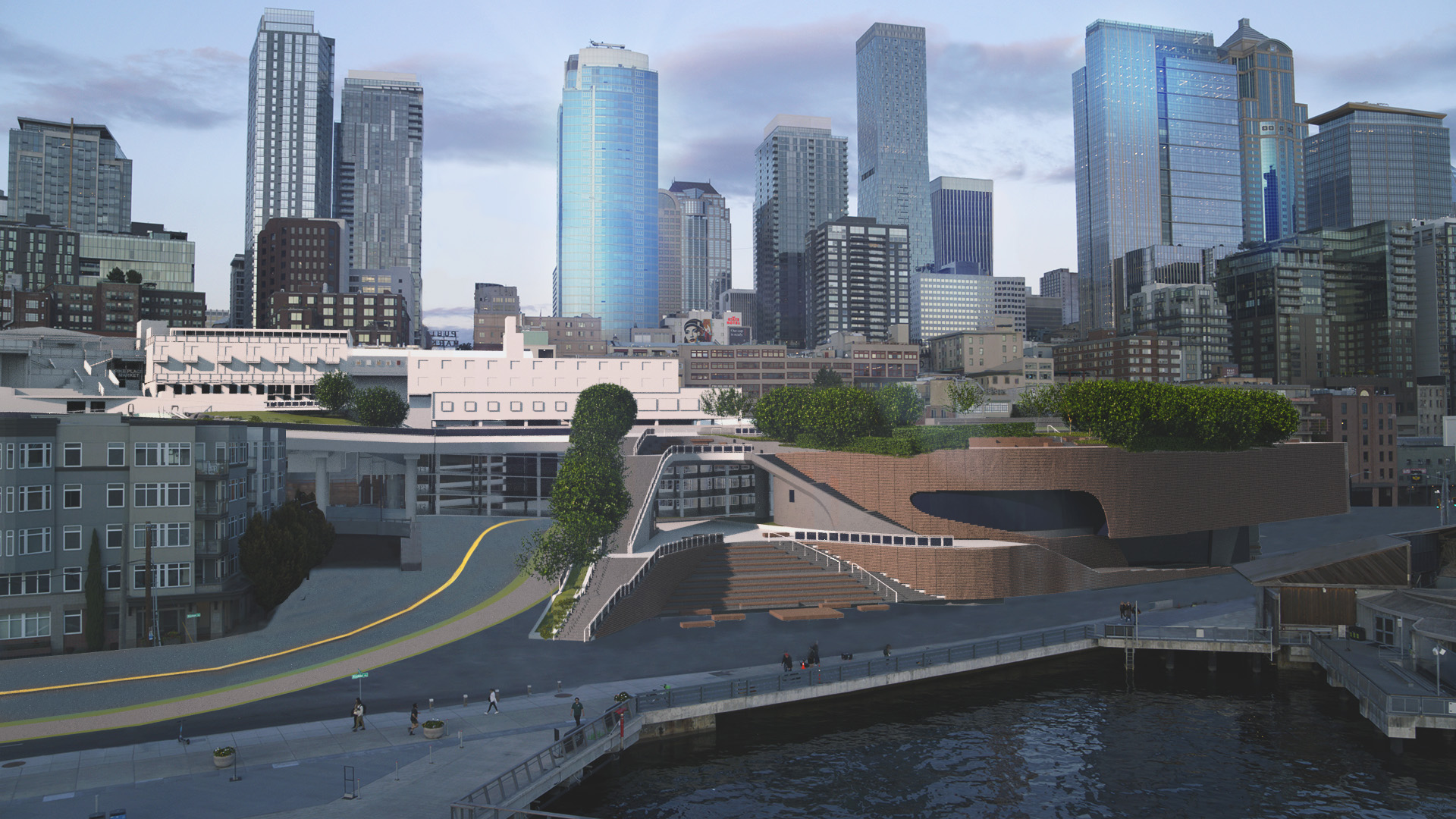 Slide middle bar to view before and after images 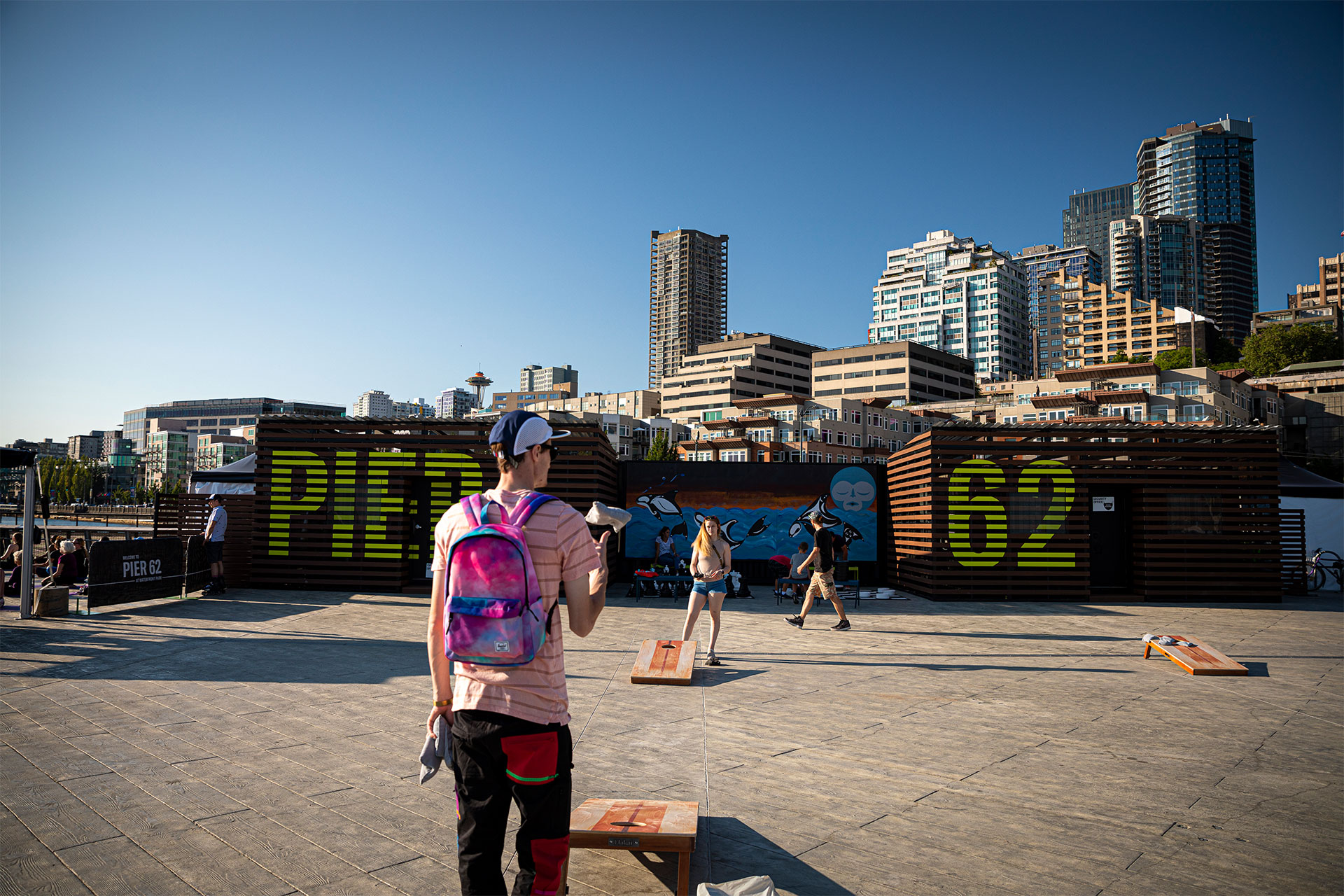 This historic pier is a vibrant, flexible community space. Built in the early 1900s, it served first as an ocean terminal. In the 1990s the city hosted the Summer Nights at the Pier concert series there, bringing in popular artists including Ziggy Marley, Linda Ronstadt and Mel Tormé. Today the one-acre pier is the site of performances, concerts and civic life, with a focus on engaging and celebrating Seattle’s communities of color. Recent happenings include an Aztec Xopantla Tianquiztli festival and an Indigenous salmon homecoming event featuring a multi-nation Native American canoe welcoming ceremony. An artist’s residency, cultural celebrations and pop-up markets focus on drawing Seattleites out of their neighborhoods and into downtown. In 2023, the UW’s Henry Art Gallery will present the work of artist Rafa Esparza at Pier 62 as part of the Henry OffSite series, bringing art into public spaces around the city.

The inaugural site of Seattle’s future Waterfront Park, Pier 62 is a space for public gathering, recreation and celebrations.

A wide pathway from Pioneer Square to the Seattle Aquarium, the Park Promenade will feature dedicated bike lanes and ample space for pedestrians, artwork, play areas and outdoor dining. The Park Promenade has roots in UW research, including a 2011 College of Built Environments studio project led by Nancy Rottle, now a UW professor emeritus, in which students explored ways to make the waterfront more ecologically and pedestrian friendly. Their vision of how to knit together disparate places, needs and interests inspired city and community leaders to think about the waterfront holistically. 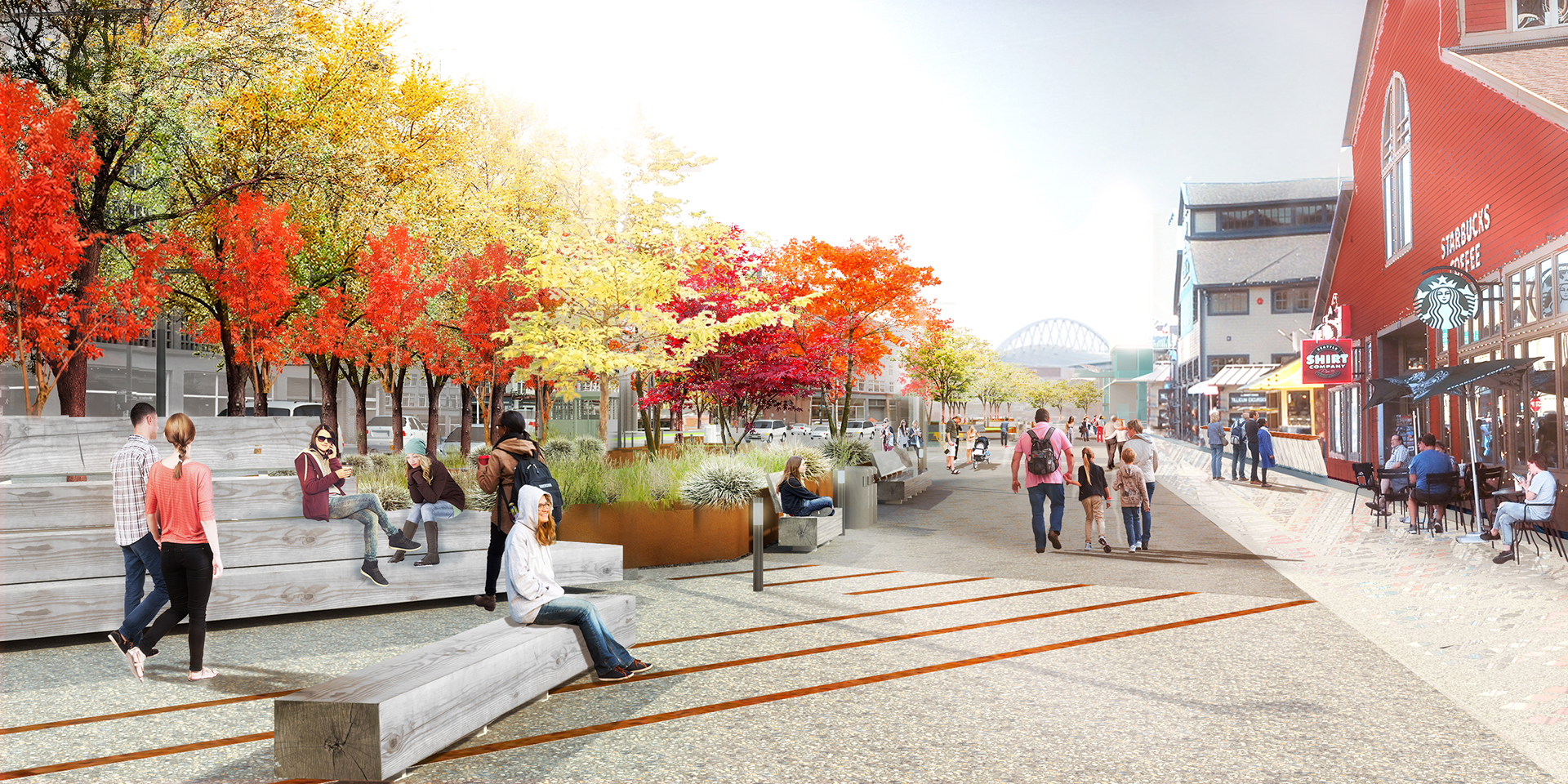 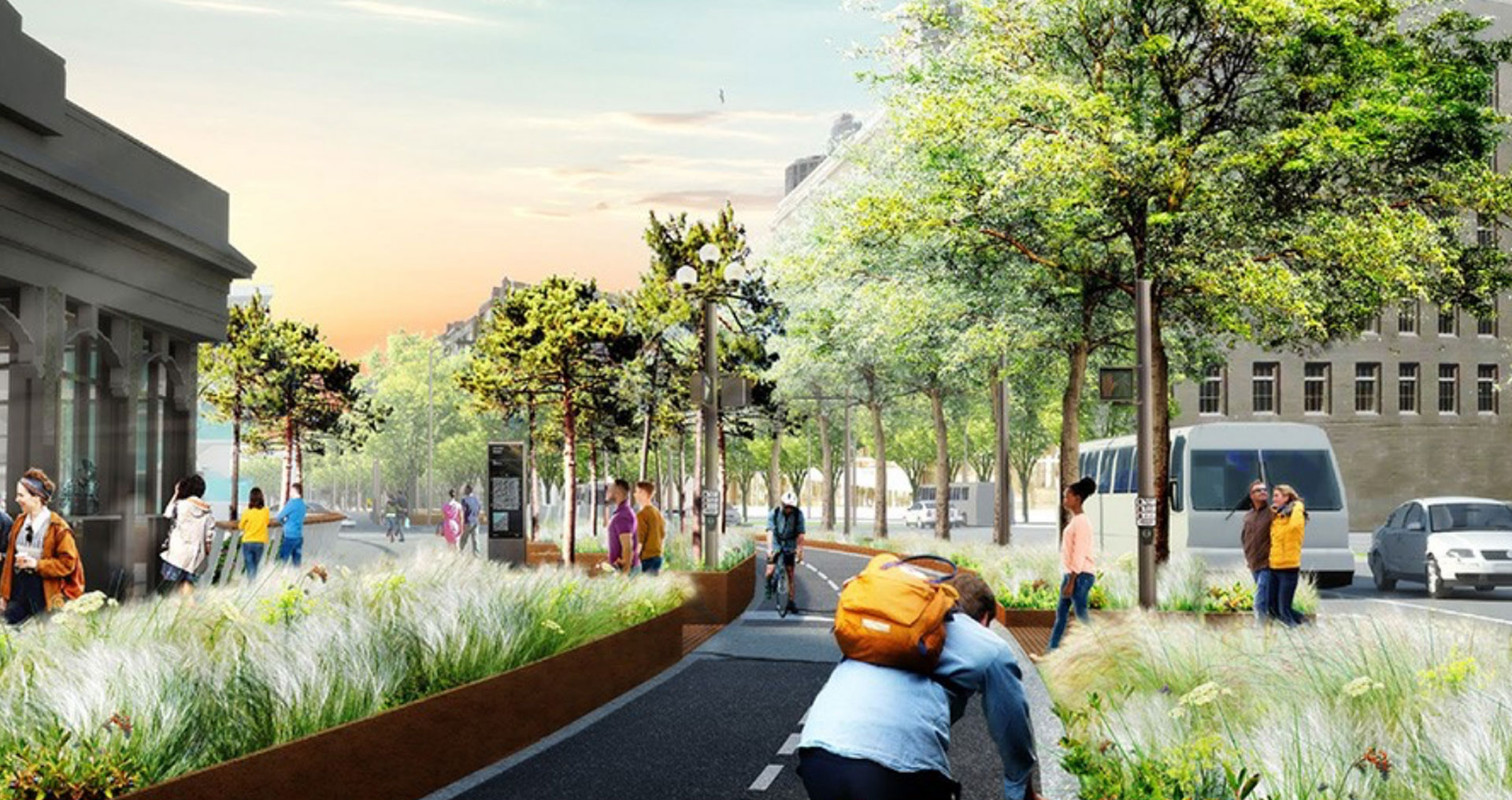 National and local artists are drawing on themes of nature and culture to create new works that enhance this civic space. Indigenous artists from local tribal nations, including 2011 UW Law alumnus Peter Boome, Upper Skagit Tribe, have created work that reminds visitors of the region’s original inhabitants and still-thriving cultures. “Turbulent Times,” Boome’s mural at Pier 62, features orcas with Salish designs plunging into the waters of Puget Sound and references the current COVID-19 pandemic. A few blocks to the south, three cedar-and-bronze Coast Salish welcome figures by Qwalsius–Shaun Peterson, Puyallup, will soon face the water across a new playground on Pier 58. Sculptor Norie Sato, ’74, drew from nature for a 37-foot steel sculpture inspired by a fern, as well as a screen wall along the Union Street Pedestrian Bridge that features the image of a fern overlaid with the opened wings of a seagull. “One of my hopes for the waterfront,” Sato says, “is that it creates moments of magic and wonder for the people who live here.” 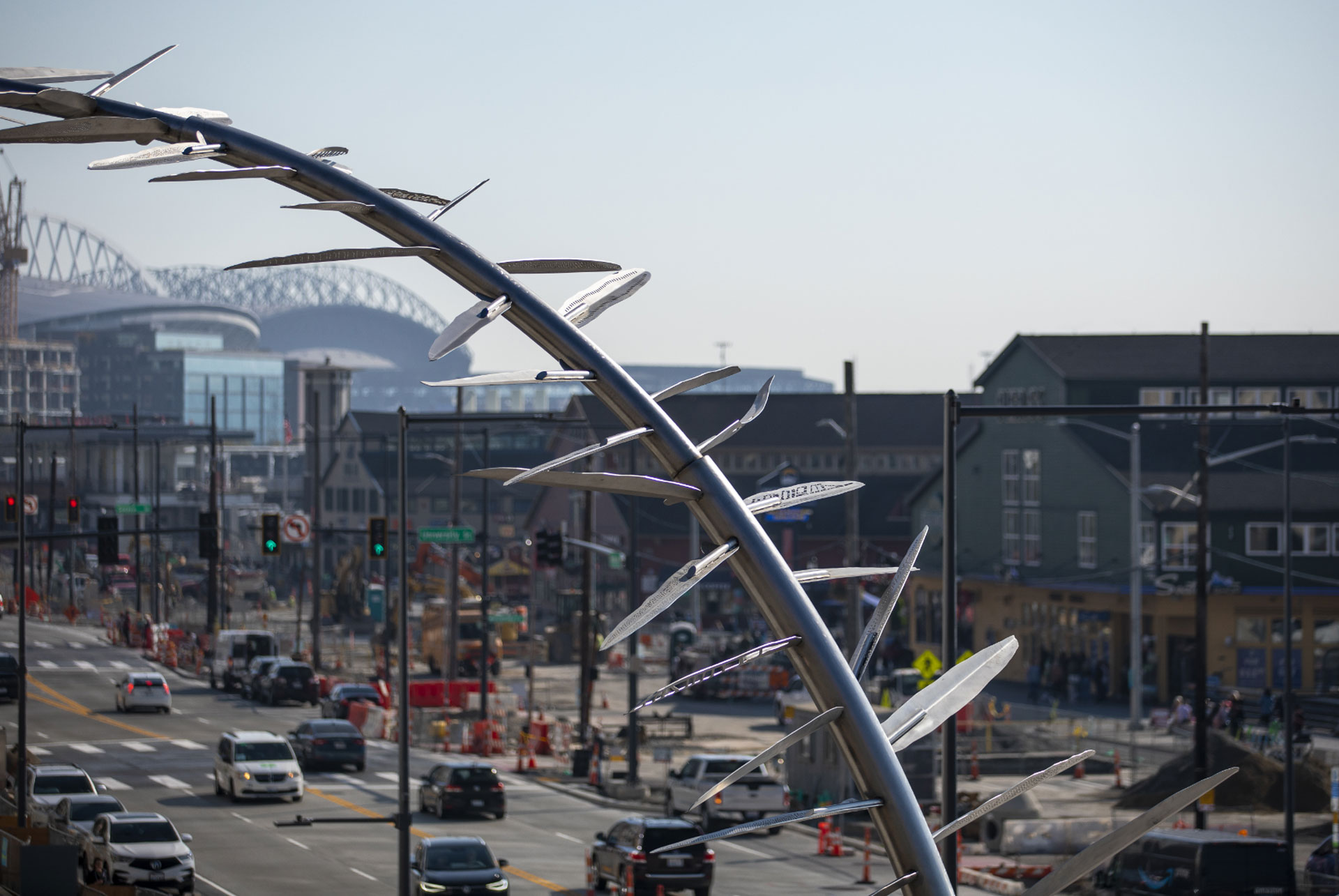 A section of “Unfurling a Gesture (the Nature of Persistence)," a 37-foot steel sculpture by artist Norie Sato, ’74. 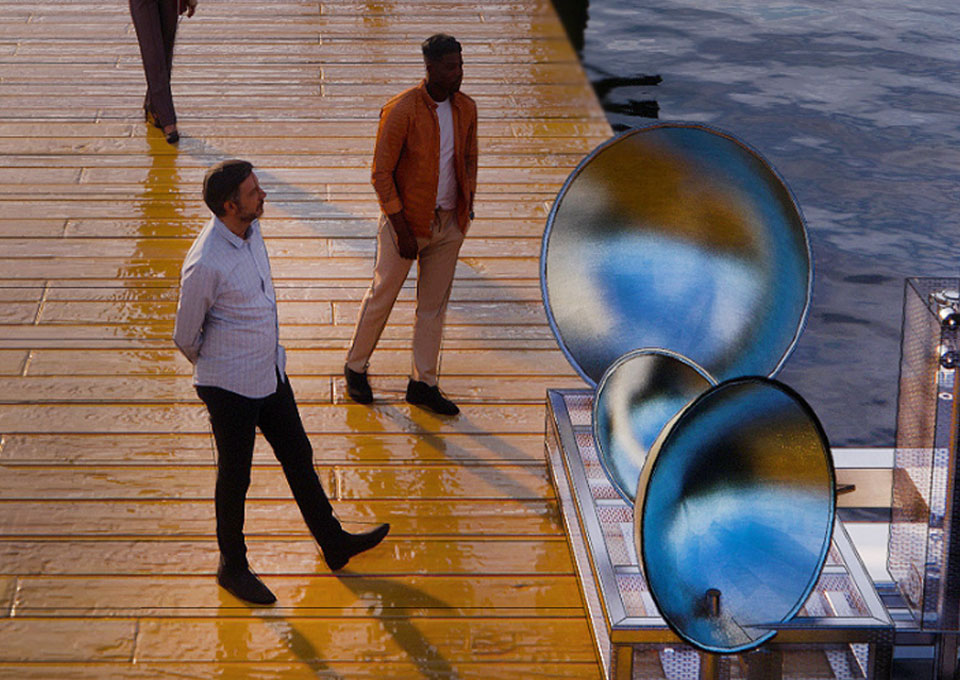 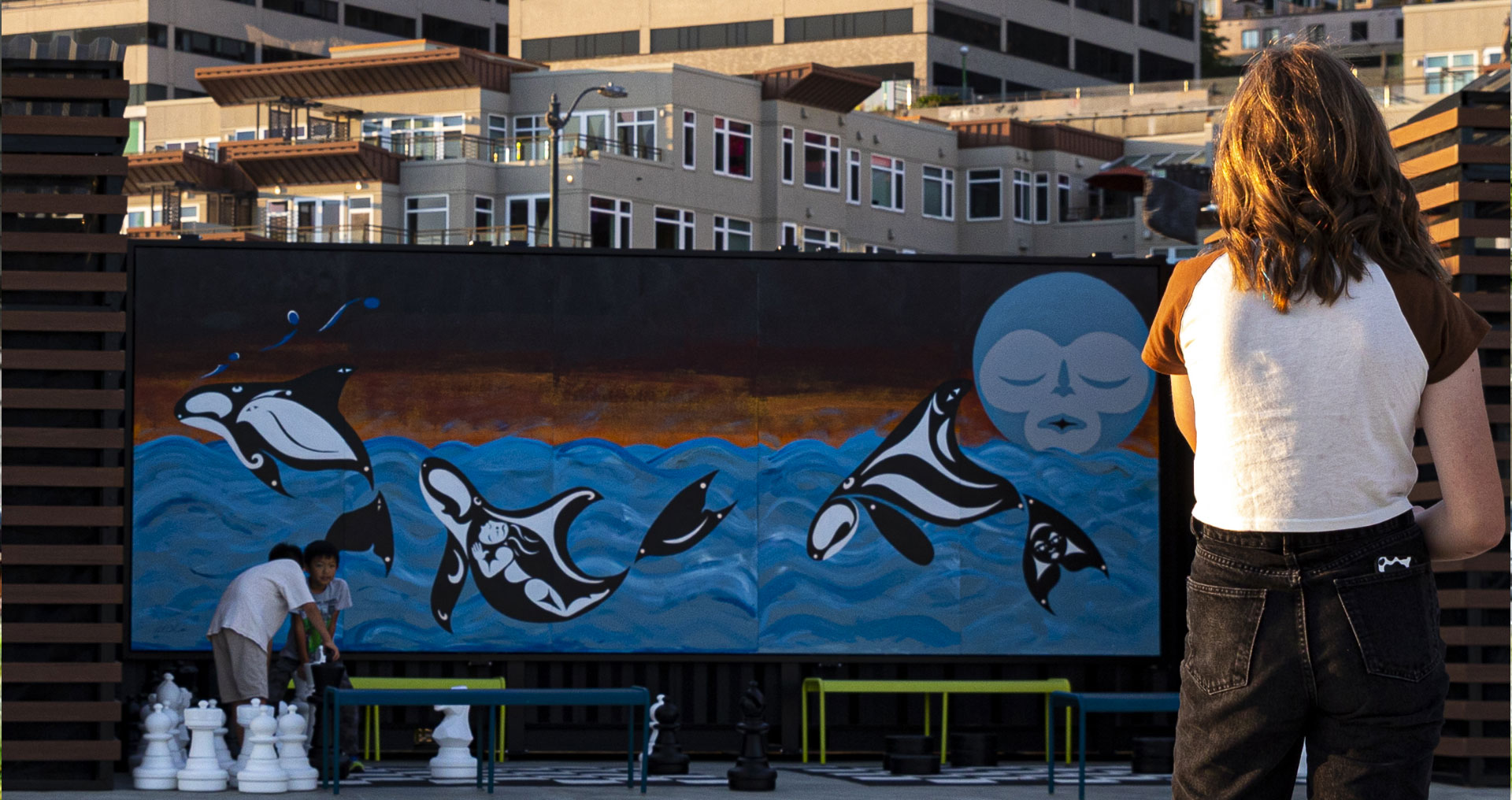 From UW Magazine: Read more about the UW's role in Seattle’s waterfront renewal. 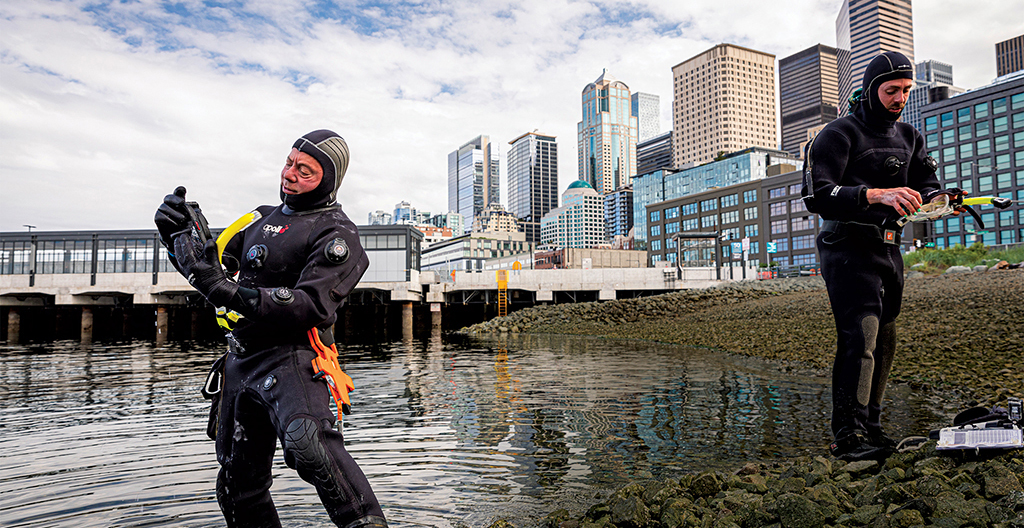 A Model for the World 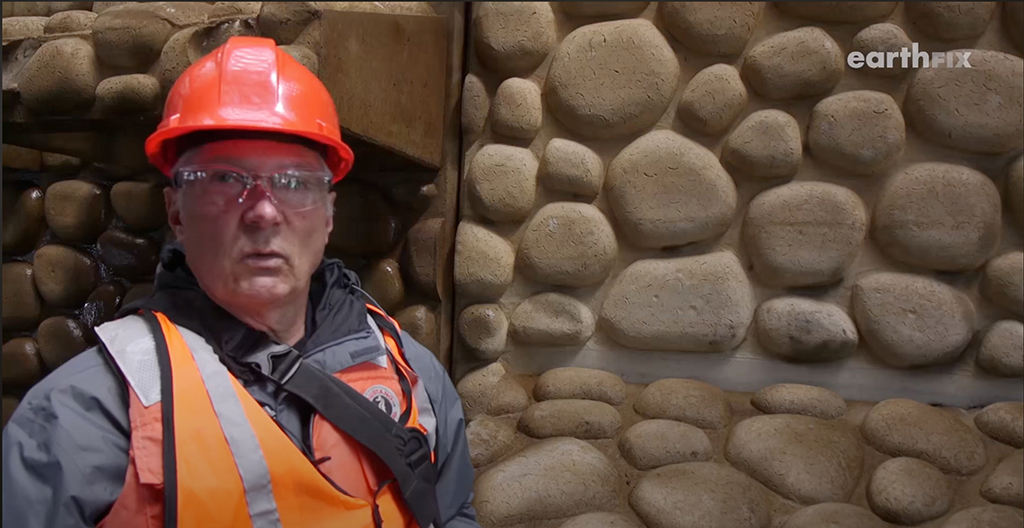