MaKayla Woods came to the University of Washington to be accepted for who she was. What she found was a place where she could become her best self.

The game hasn’t even started, and UW senior and soccer forward MaKayla Woods is already soaked. The heavy rain and powerful wind of the October 2021 “bomb cyclone” have made warmups soggy and challenging — and exciting. It’s a perfect day to take on the No. 5 University of Southern California Trojans.

It’s also Senior Day. Minutes ago, Woods and her fellow seniors were celebrated as they posed for photographs at midfield, but now they are focused on the game ahead. Following last season’s run to the third round of the NCAA tournament, this year has fallen short of expectations, and the Huskies are unranked. With four games left, the team has plenty to prove. 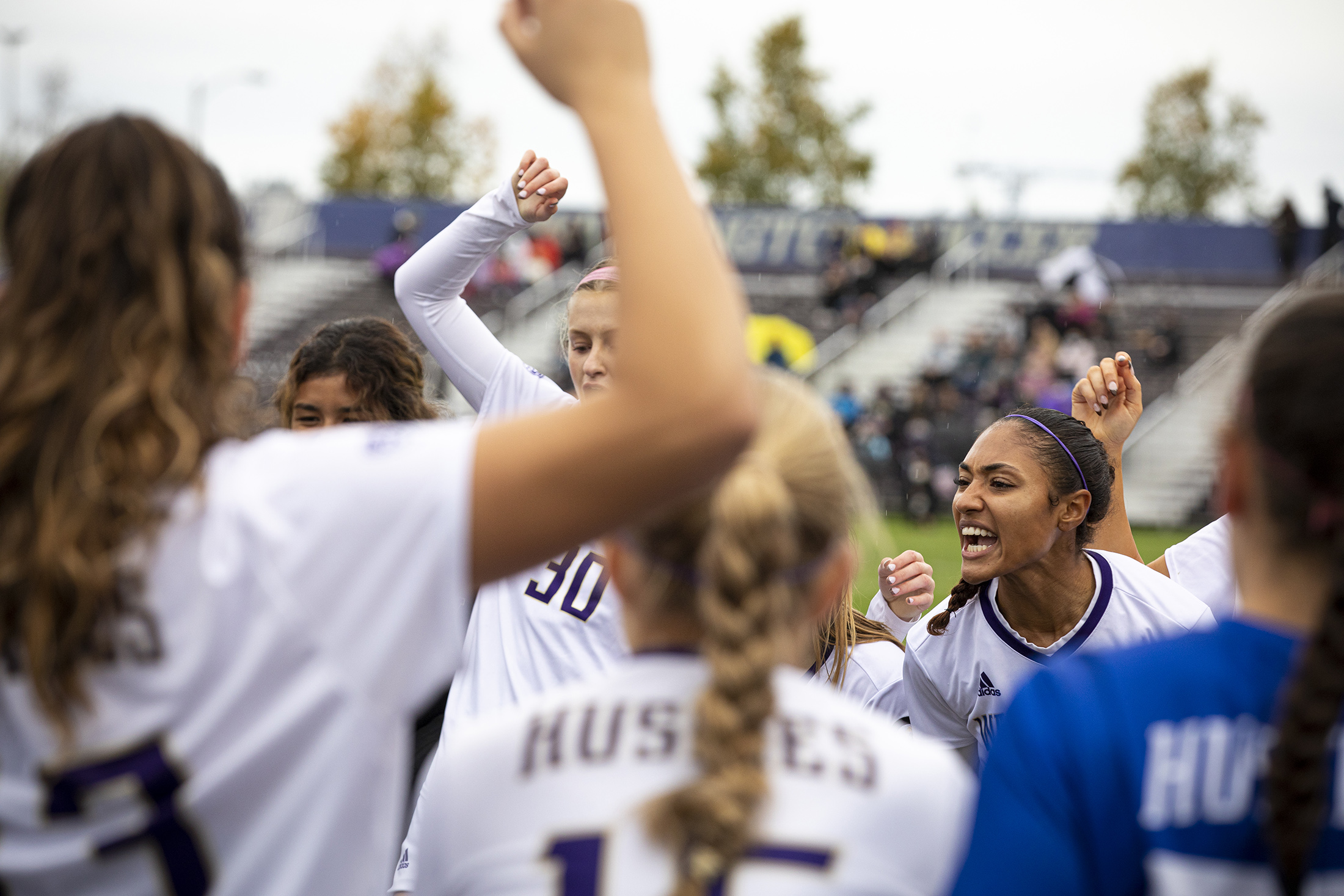 Woods pumps up her teammates before they take on USC. 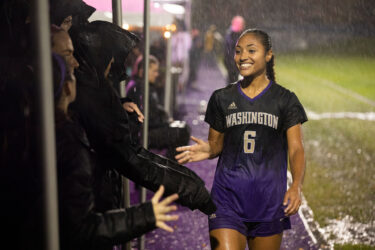 “MaKayla was a warrior, an unbelievable competitor and one of the hardest-working individuals I have coached,” says Coach Nicole Van Dyke.

After Head Coach Nicole Van Dyke shares final words of encouragement, it’s up to Woods, now in the center of the huddle, to send the team onto the field with a pump-up speech. She’s been doing that since she was a freshman. Her coaches and teammates call her “Hype Girl,” a nickname she carries with pride.

“You’re capable of more than you know,” Woods shouts to her teammates through the growing storm. “Go out there and get after it!”

Months later, when the season is over and she’s looking to graduation and beyond, Woods will reflect on her role at the center of things — of huddles, of efforts to build stronger communities, of promoting equity and belonging on campus — and how being at the center is who she is and what she believes in: “It’s my duty to be who I am.”

But she didn’t always feel that way.

A place of belonging

As a Black athlete in predominantly white Vancouver, Washington, Woods was called “sassy” and criticized for having “an attitude” because she was confident and competitive. She recalls classmates assuming she was fast and athletic just because she was Black, not because she trained day after day to better herself in soccer and track. 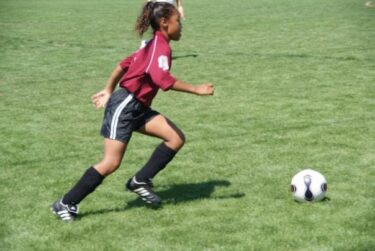 Sometimes she felt like an impostor. She’d ask herself, Should I tone down my playing style? Hide my personality so I don’t make anyone uncomfortable?

Instead, Woods sought out people who accepted her — and a university and soccer program where she could be herself. She found all of that at the UW.

“When I visited Seattle and the UW in high school, it felt like home: open-minded and aligned with my values,” she says. “I just knew it was the place for me.”

When Woods arrived as a freshman on an athletic scholarship, she wasn’t just accepted for who she was. Through the support of the soccer team, Husky Athletics and the UW community, she says, “I set about becoming the best version of myself.”

For Woods, that best version was — and is — a leader.

As a freshman, Woods was quick to make an impact on the soccer team. In her first game, she scored a goal within minutes of subbing in. “I felt so proud to be contributing to this team,” she says. “That alone was everything I wanted in a college soccer career. But my student experience was so much more.”

Off the soccer field, Woods found a strong sense of belonging in her connection with other student-athletes across the University, including on a meaningful service trip to rural Cambodia with other UW athletes. She also became involved in the Black Student-Athlete Alliance (BSAA), serving as co-president her junior and senior years. 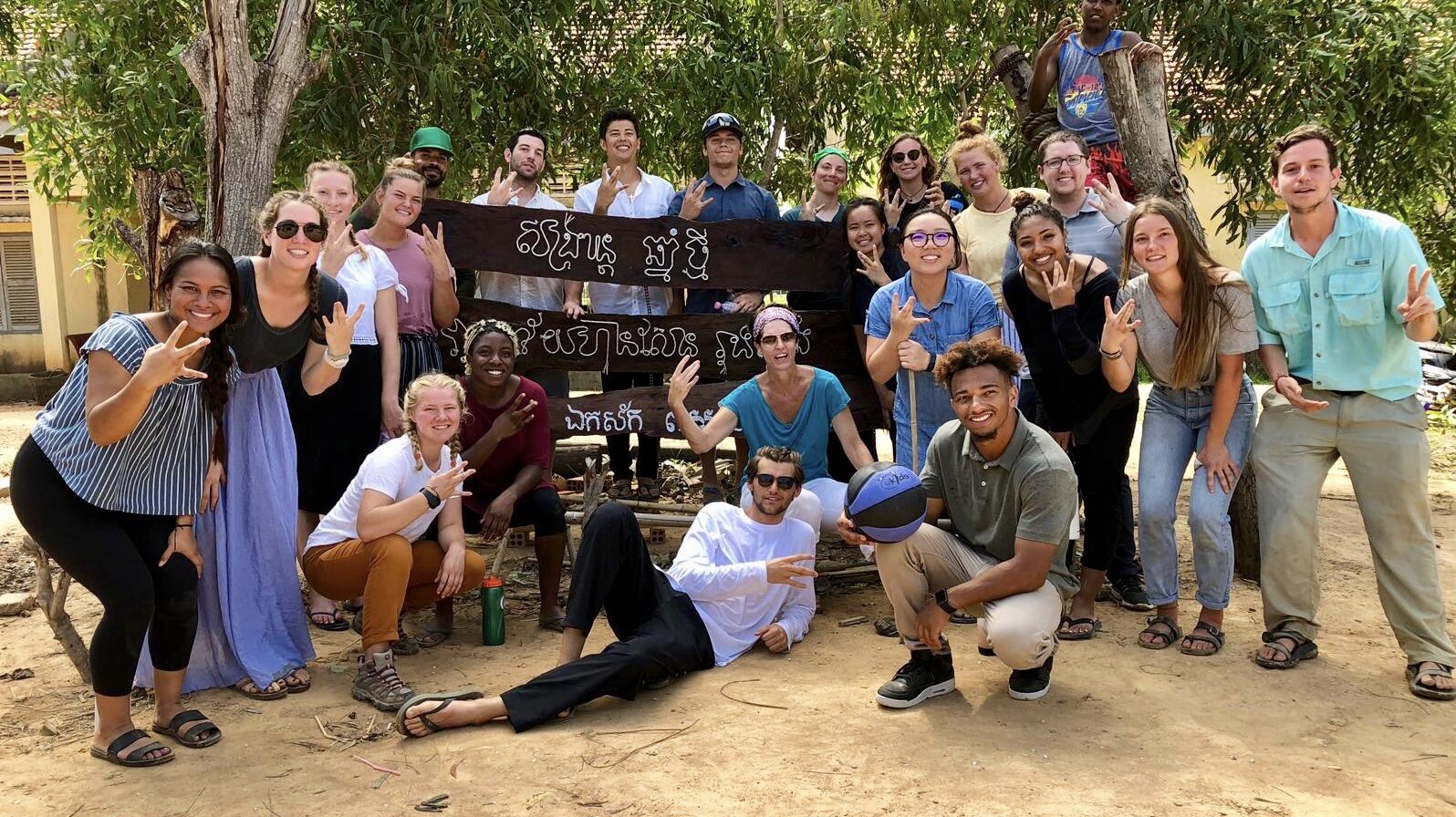 Woods and other UW athletes teamed up with residents of a rural Cambodian village to build a sport court for a local high school.

Under Woods’ leadership, the BSAA continued to take on new challenges: It was a place of safety and connection for Black student-athletes in the wake of the killings of George Floyd, Breonna Taylor, Ahmaud Arbery and many others. It helped prepare members for the post-NCAA world by bringing in Black alumni to share their experiences and offer advice. And it advocated for a new senior-level Athletics position to oversee diversity, equity and inclusion — with Woods on the hiring committee that selected Sheridan Blanford for the role in December 2020.

“Those last two years, people were really listening to my voice,” says Woods. “That was when I started to use my platform.” 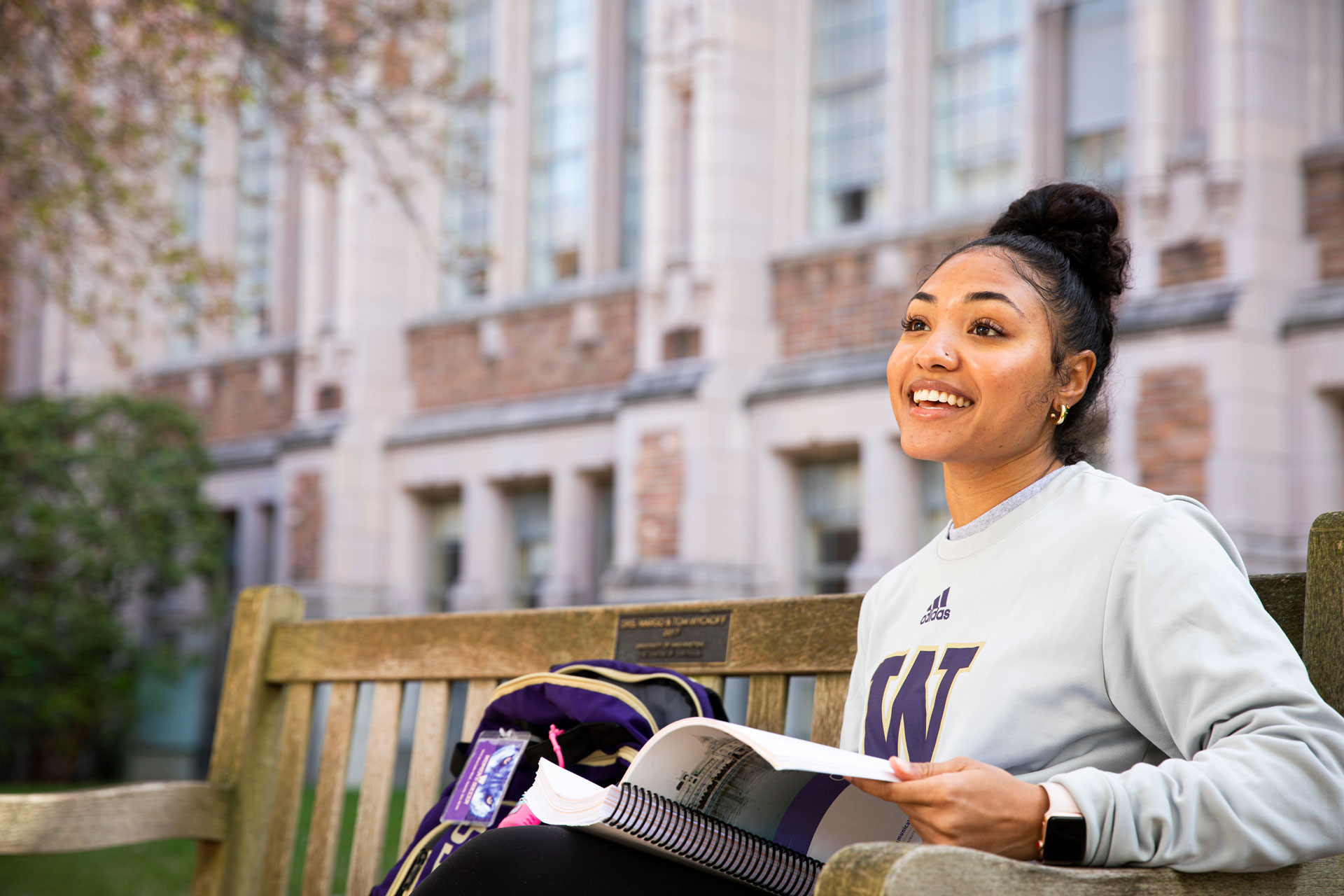 “I’m so involved in the community because I learned about structures and systems and how they affect different marginalized groups,” says Woods.

As Woods grew as a leader for inclusion on campus, she kept thinking about the difference she wanted to make in the community.

A sociology class taught by Professor Alexes Harris (also the UW faculty athletics representative) broadened her perspectives on institutional racism and the causes and effects of mass incarceration: “big, broad topics that I hadn’t thought about in this very structural way,” she says. By pairing her sociology major with minors in diversity and education, Woods developed the tools to identify structural problems and work to address them — and recently, she’s been doing just that.

This winter, Woods landed an internship with the Seattle Municipal Court’s Community Resource Center (CRC). Open to all, the CRC helps connect those in need with social services and community support: employment, food assistance, health care, training and more.

Working part time as an activities coordinator at the local Boys & Girls Club offers more opportunity to further her mission of inclusion. “I know what it feels like to be excluded,” says Woods. “That’s why I’m an advocate for kids and parents who need it most. I want to use my experiences to create spaces for others where they belong.” 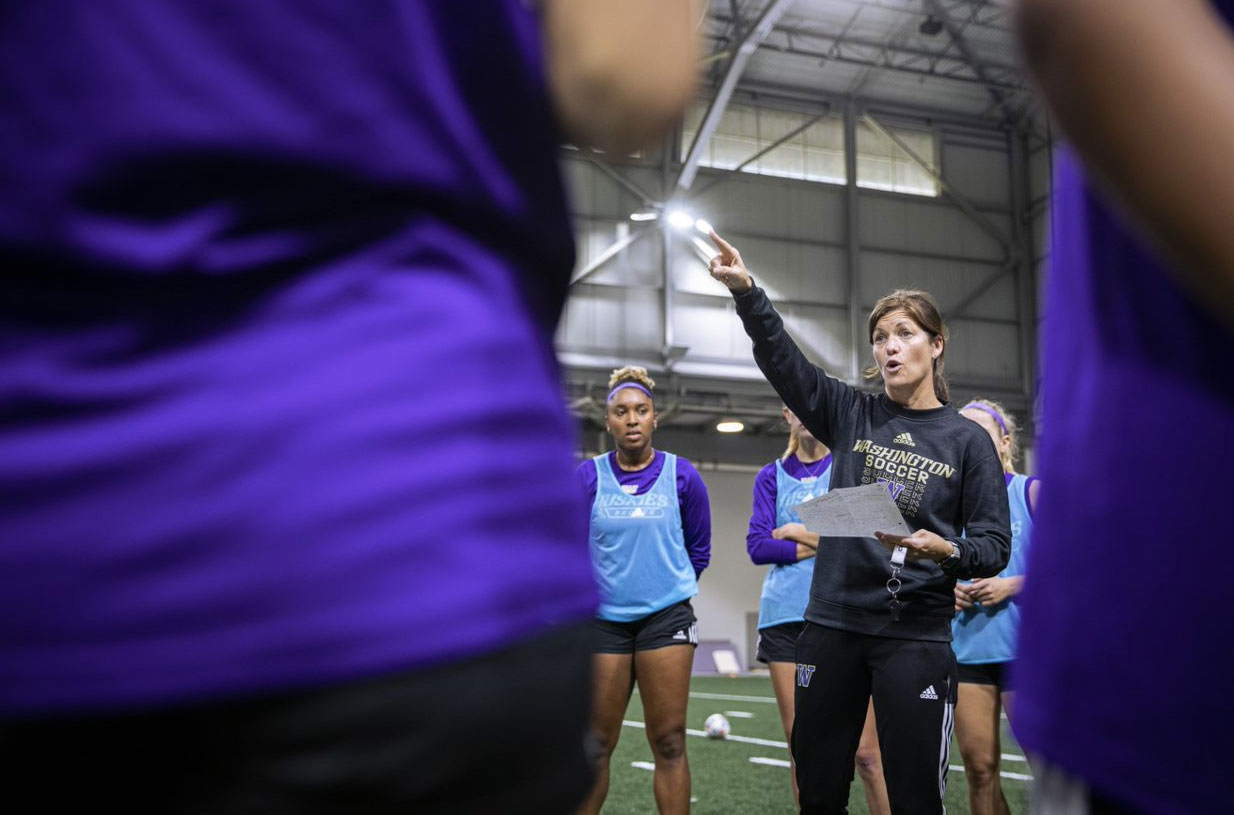 MaKayla in the middle 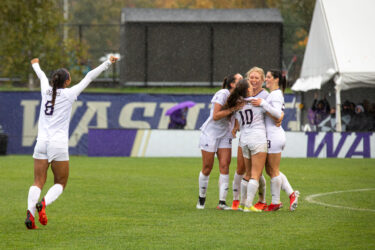 Woods joins teammates to celebrate the game-tying goal against USC.

During that blustery game last fall, Woods’ speed and wide runs help stretch the field and tire out USC’s defenders. On the sidelines, Hype Girl is laser-focused, shouting encouragement to teammates as they sprint by.

Regulation ends in a 2-2 draw, and after two hard-fought overtime periods, the deadlock stands. Though the Huskies had hoped for a win, the result proves they can hold their own against anyone.

After the final whistle, the wind and rain intensify. But instead of heading for the locker rooms, Woods and her teammates run across the field to exchange hugs with friends and family who came to cheer them on. With a close game, wild weather and the fact that it’s Senior Day, it’s an emotional moment. 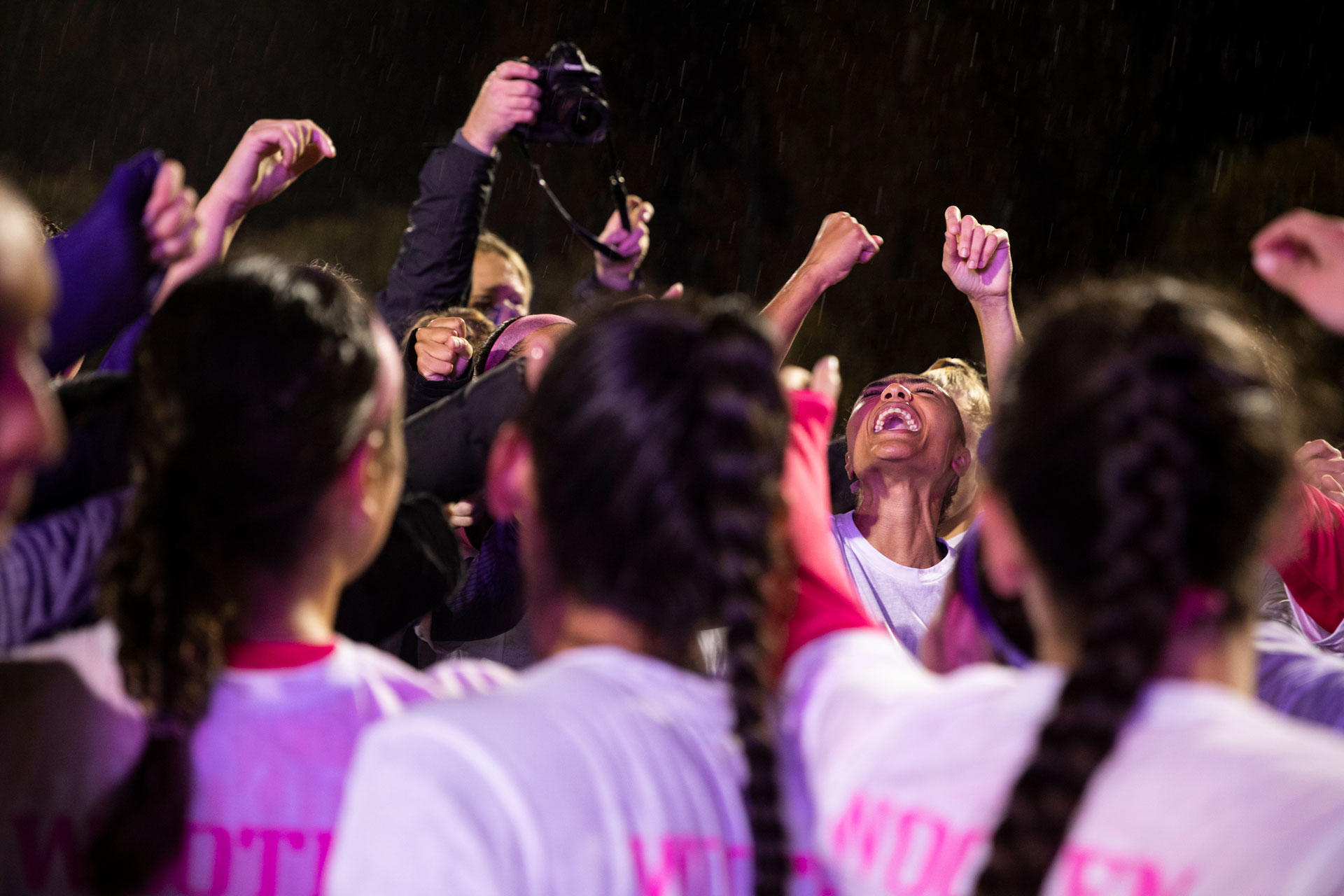 For four years, regardless of the opponent or how much time Woods spent in the game, she sent the team out onto the field with a pump-up speech. She says, “It’s my duty to be who I am."

In less than a year, some of the seniors will be pursuing new jobs. Some will be playing professional soccer. Some, like Woods, will attend graduate school. But right now, they’re bundled in warm coats and packed together under a canvas tent that flaps noisily in the sideways rain. Players, parents, family and friends bunch together for protection from the elements. It looks like an informal huddle — and MaKayla Woods just happens to be in the middle. 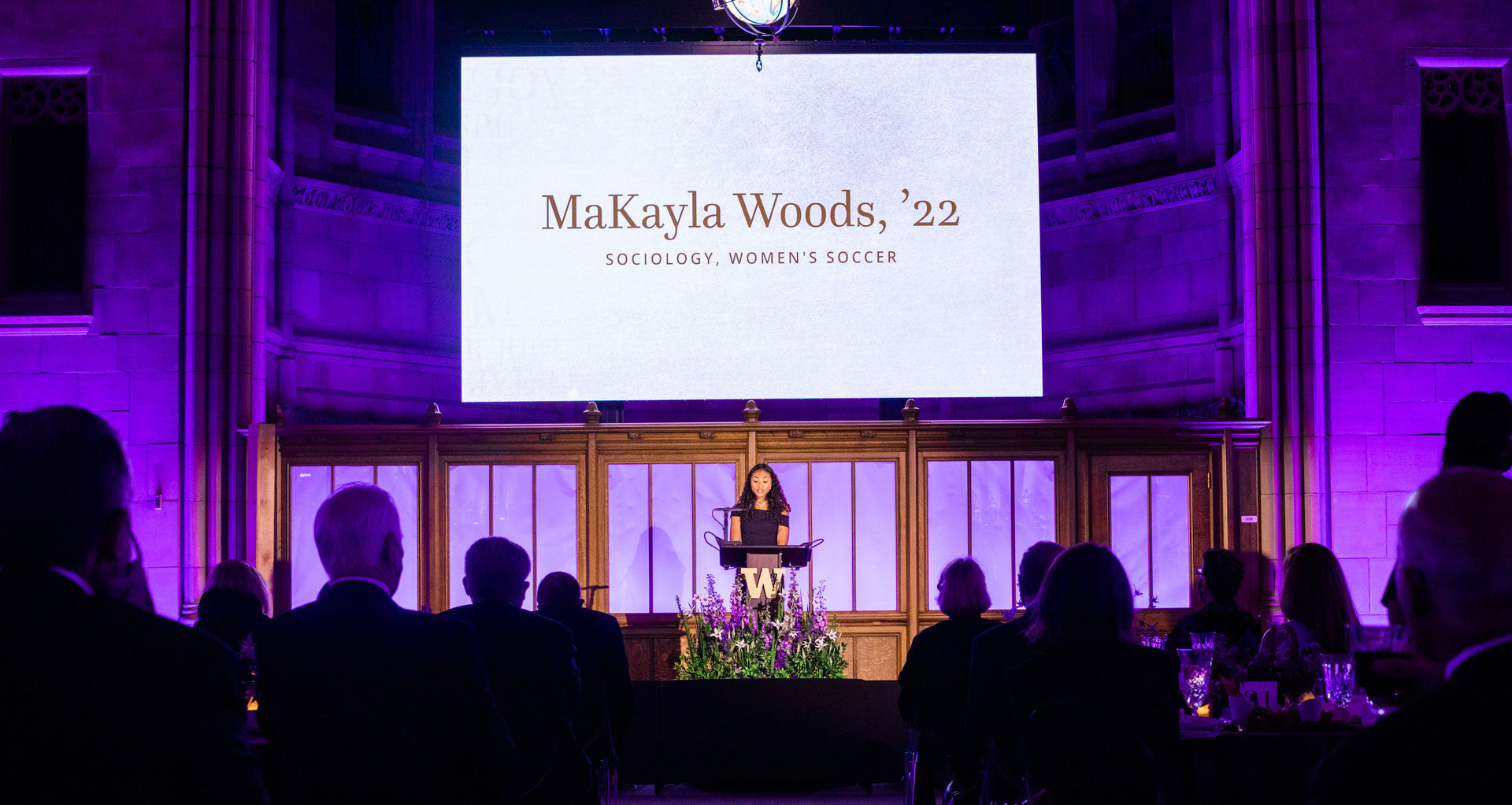 This fall, MaKayla Woods will begin graduate school at the University of Southern California, where she’ll pursue a Master of Social Work. But, as she said in a speech to UW supporters in Sept. 2021, "A big part of my heart will remain in Montlake, with Husky student-athletes who want to be the best versions of themselves — on the field, in the classroom and in the communities they serve." 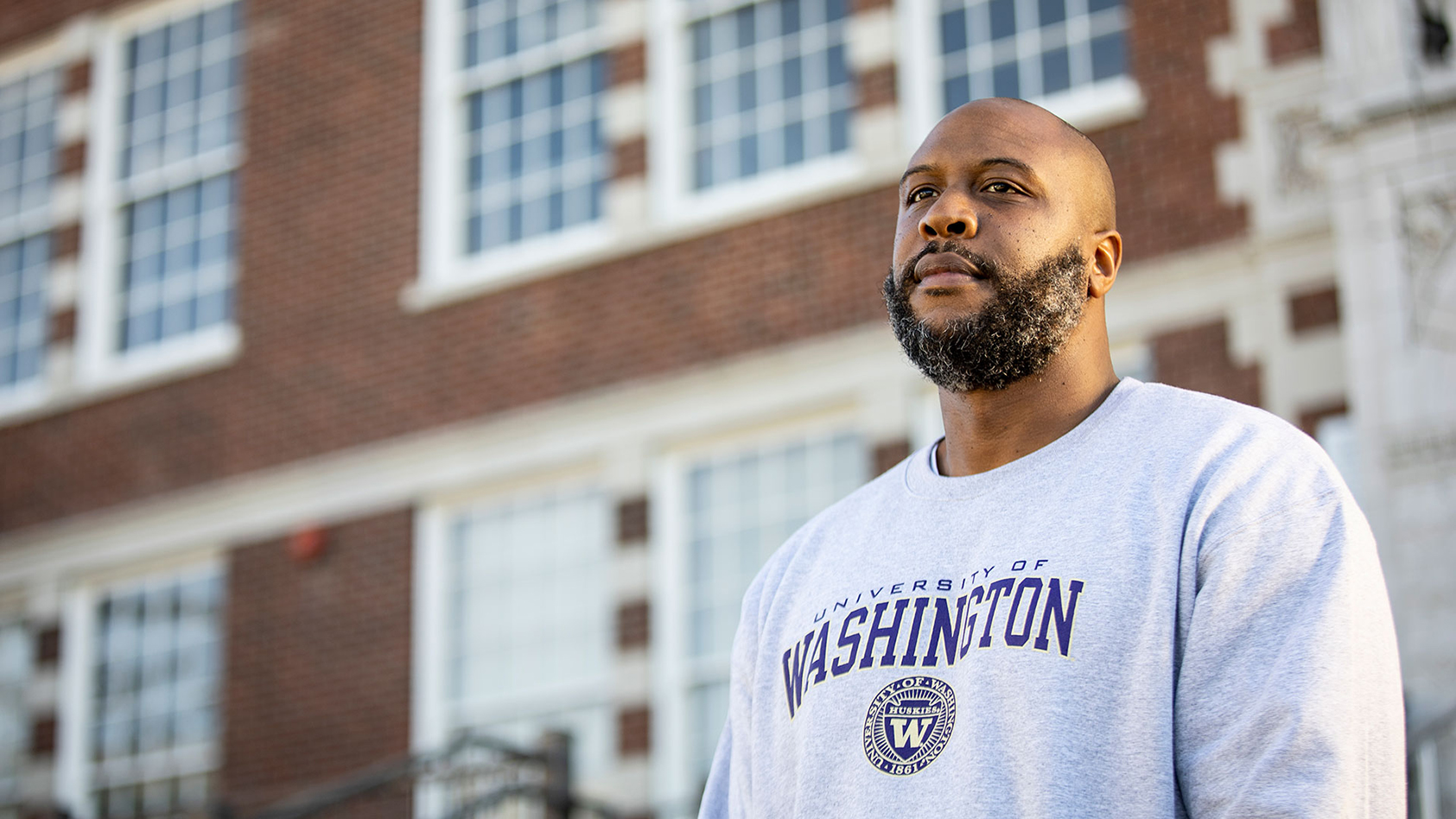 Hallie Jensen was a standout athlete in high school, but she had never rowed. Then the Hometown Huskies program gave her the chance to compete on the UW's Division 1 Crew Team. 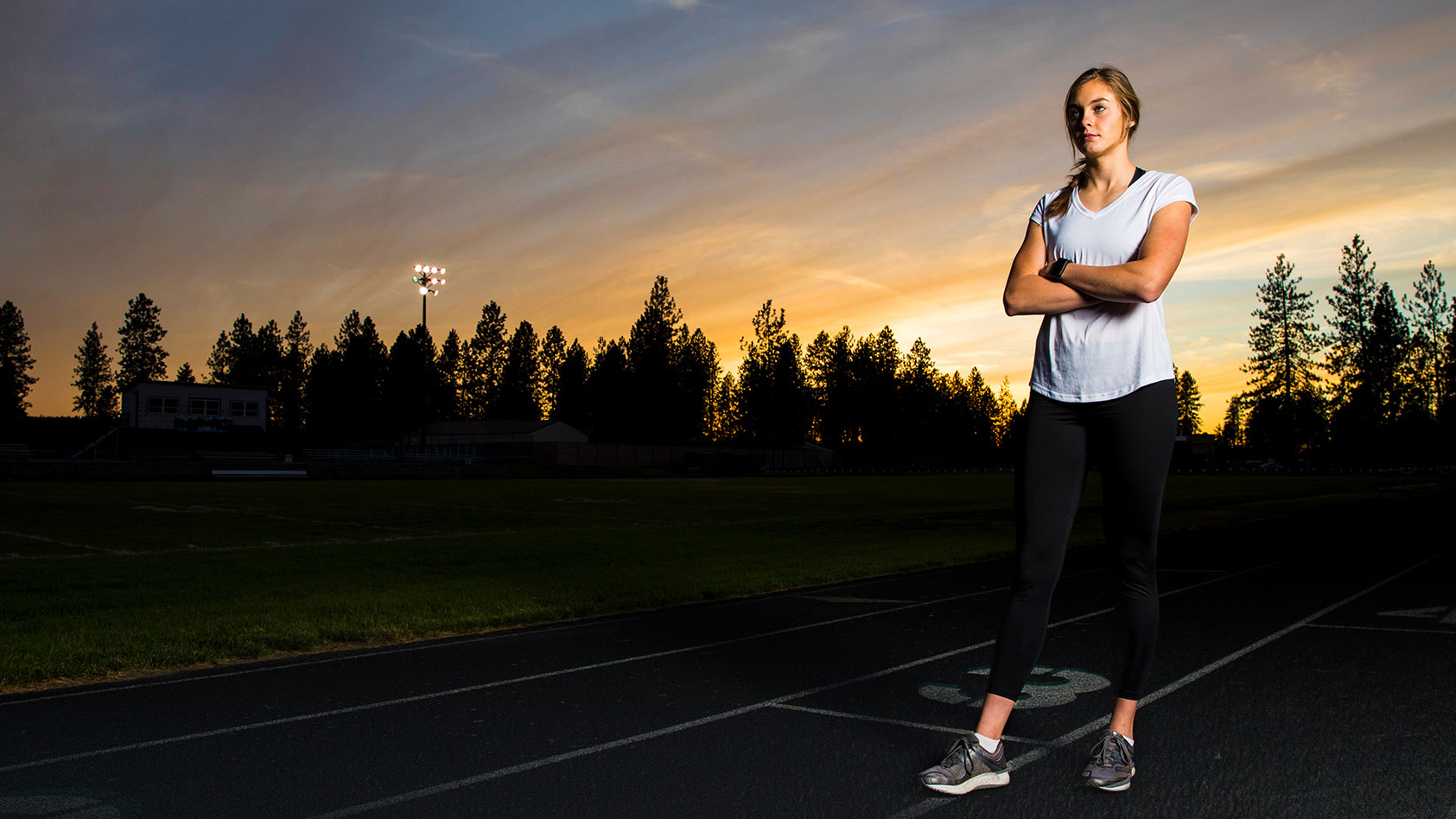 When you contribute to the Competitive Edge Fund, you can make a difference for Husky Athletics programs supporting 650 student-athletes in all 22 women’s and men’s sports.