UW paleontologists and students have unearthed significant dinosaur fossils — including a possible new species — in the Montana badlands.

It’s a humid July day in the eastern Montana badlands, the midmorning temperature already edging up toward the triple digits. Veiled by a haze of wildfire smoke, the sun casts a primordial gleam on hills built up by eons of sediment and eaten away by wind and water.

Greg Wilson Mantilla, curator of vertebrate paleontology at the UW’s Burke Museum of Natural History and Culture, gestures outward at what was once a very different place.

“This is dino country,” he says.

Zeke Augustine, ’23, has sifted through soil for microscopic fossils and helped dig up a Triceratops. The Burke Museum has been at the heart of it all.

Some 66 million years ago, a Triceratops took its last breath a few feet from where Wilson Mantilla now stands. The ancient landscape was fertile, crisscrossed by rivers snaking their way east from the young Rocky Mountains to North America’s inland sea. The Hell Creek Formation (as the layers of sedimentary rock are now known) was teeming with plants and animals — and dominated by dinosaurs. After the Triceratops died here, it was eventually entombed in mud. Until now.

Behind Wilson Mantilla is Kelsie Abrams, paleontology fossil lab manager at the Burke. She spends most of her time in a climate-controlled laboratory, carefully preparing fossils from around the world. But for two weeks a year she travels to far-flung dig sites, advising on fossil extraction and preservation, and managing teams of volunteers like those now gathered on a hillside of soft mudstone, huddled around the partially unearthed Triceratops.

Joining Wilson Mantilla and Abrams are a UW-trained paleobiologist, four UW students and recent graduates, and other students and volunteers. They’ve traveled to this remote locale for the opportunity of an aspiring paleontologist’s lifetime: to be at the front lines of dinosaur discovery.

While volunteers shovel rock from the perimeter and carefully pry mudstone from fossilized bone, Abrams speculates that this Triceratops was picked clean by scavengers or tossed about by running water — scattered into puzzle pieces that she’ll reassemble in the lab. Then, she and a couple of students kick around ideas for a murder mystery. They’re detectives, after all.

This is what hooks many budding paleontologists: the ability to lift the veil of the present and peer back into the distant past, when creatures no human has ever seen roamed the earth. And to learn more about what their extinction — and the species that rose in their places — might mean to us today. 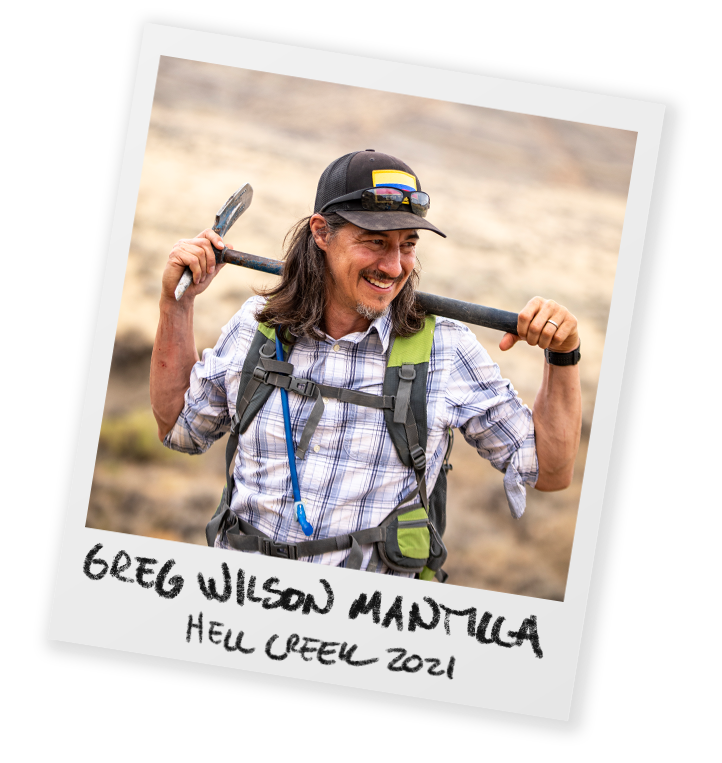 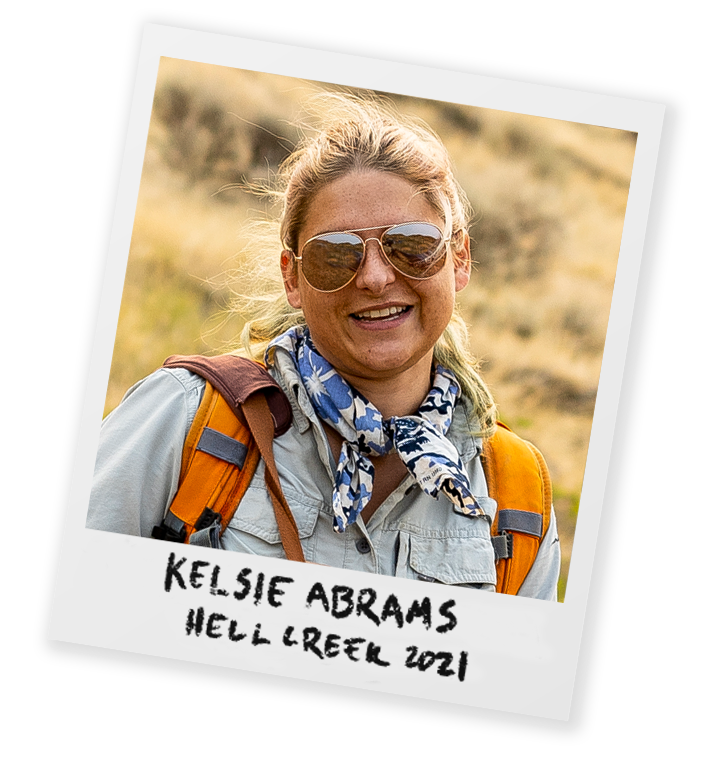 While checking on his cattle from the air, a rancher spotted a Triceratops horn poking out of a hillside.

How did the team know there were fossils here in the first place? The journey began back in 2019, when a Montana rancher flew his plane over the property he leases from the Bureau of Land Management. While checking on his cattle from the air, he noticed something peculiar poking out of a hillside.

The rancher told Wilson Mantilla, his go-to contact about fossil discoveries on his land for nearly a decade. Experts would eventually confirm it was the horn of a Triceratops (a “trike,” in paleontology slang) — a large herbivore that roamed the Late Cretaceous landscape alongside its foe, the T. rex, until the mass-extinction event that brought an end to the age of the dinosaurs. In the rancher’s honor, Wilson Mantilla dubbed it the Flyby Trike.

After being delayed a year by the pandemic, Wilson Mantilla and Abrams cleared their calendars for July 2021 and pulled together a team of volunteers and students from the UW and other universities. K–12 educators from the Burke’s annual DIG Field School program would also help with the excavation, bringing their firsthand experience back to students in Washington and across the country.

Just a few hundred yards from the trike site, prospectors with permission to scout there followed trails of “float” — shards of fossilized tendon and bone that drift down the hill — to their origins like breadcrumbs, finding fossils of two more dinosaurs. And six miles from the main cluster, a prospector had helped Wilson Mantilla find yet another fossil with great promise.

The dig was on. 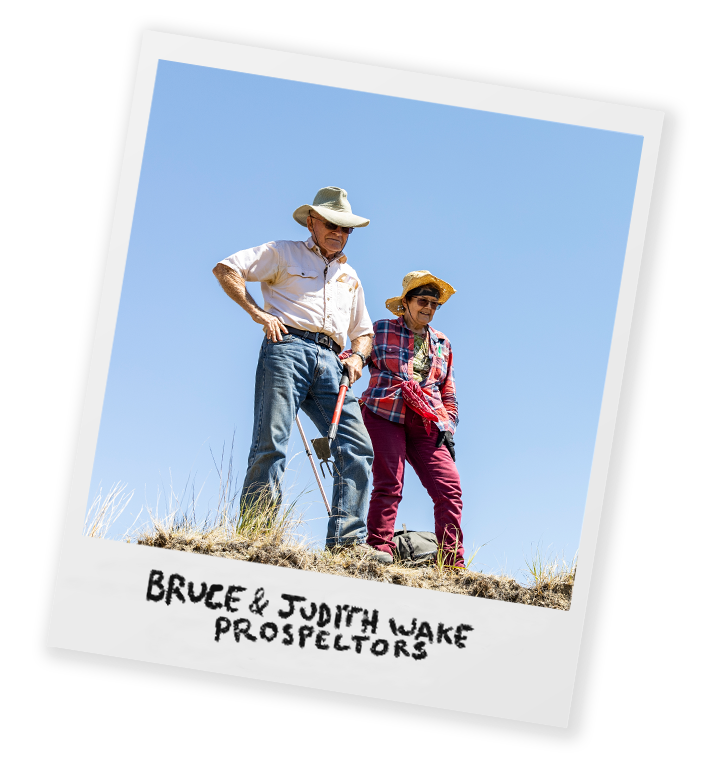 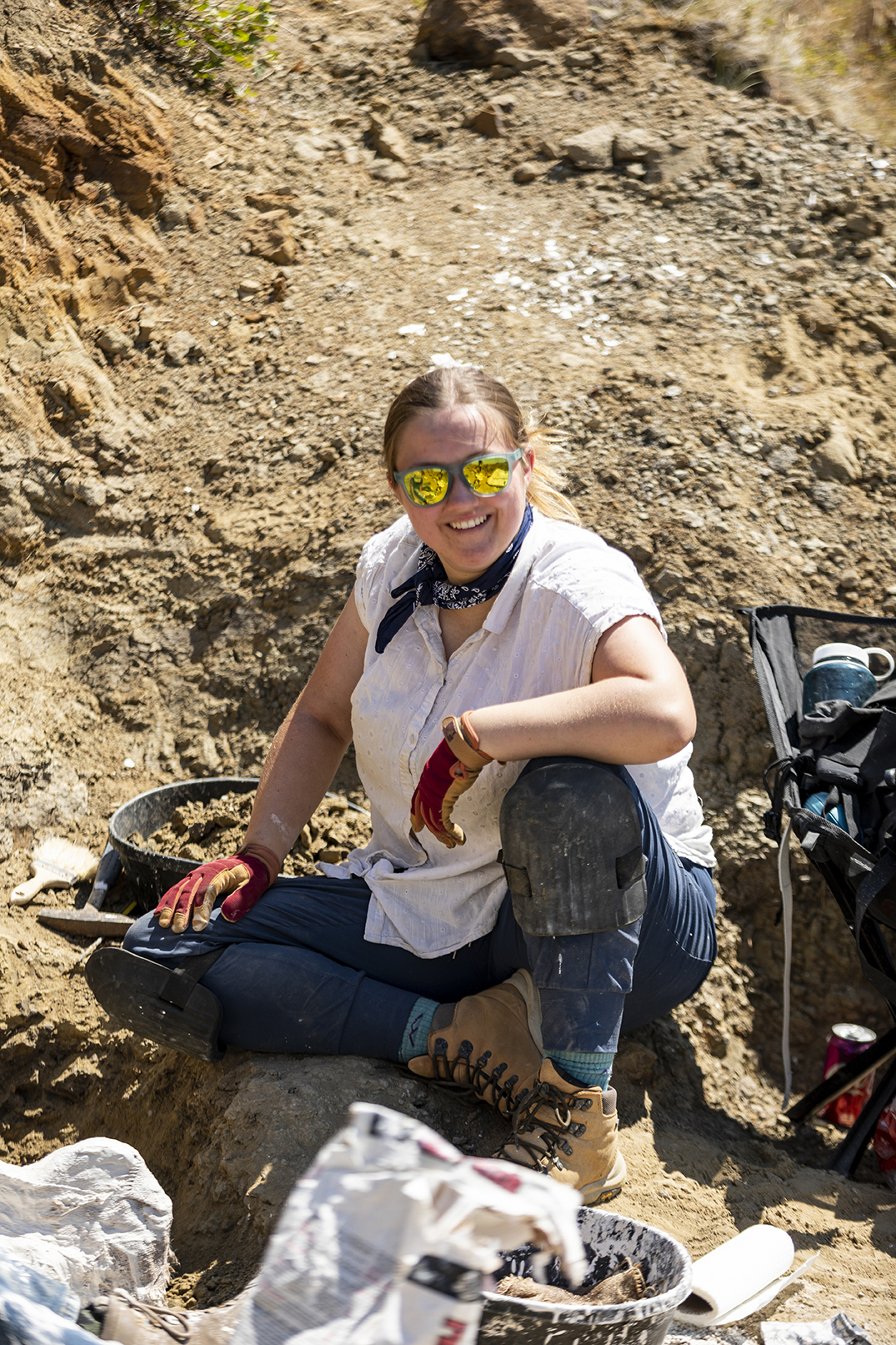 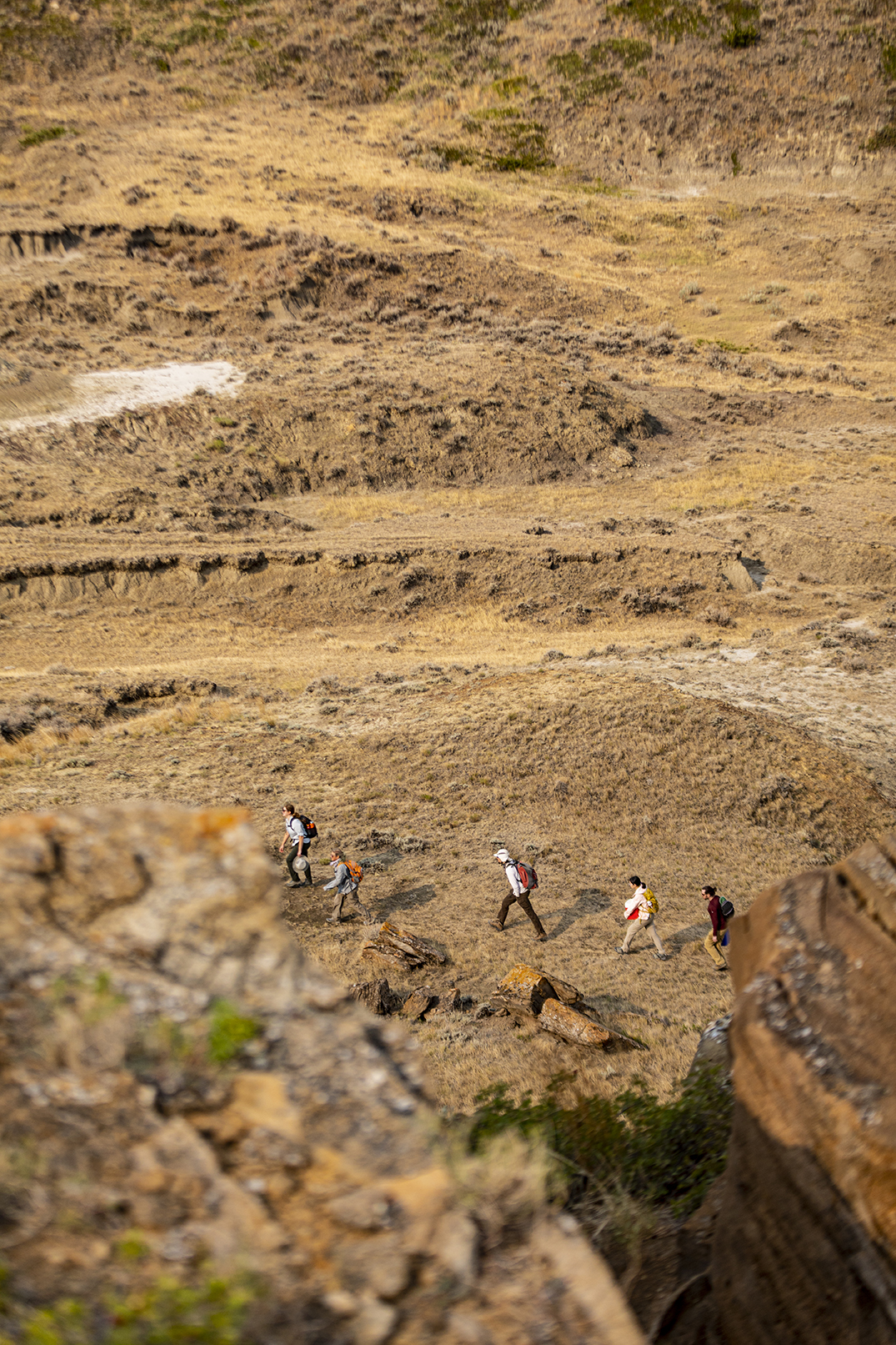 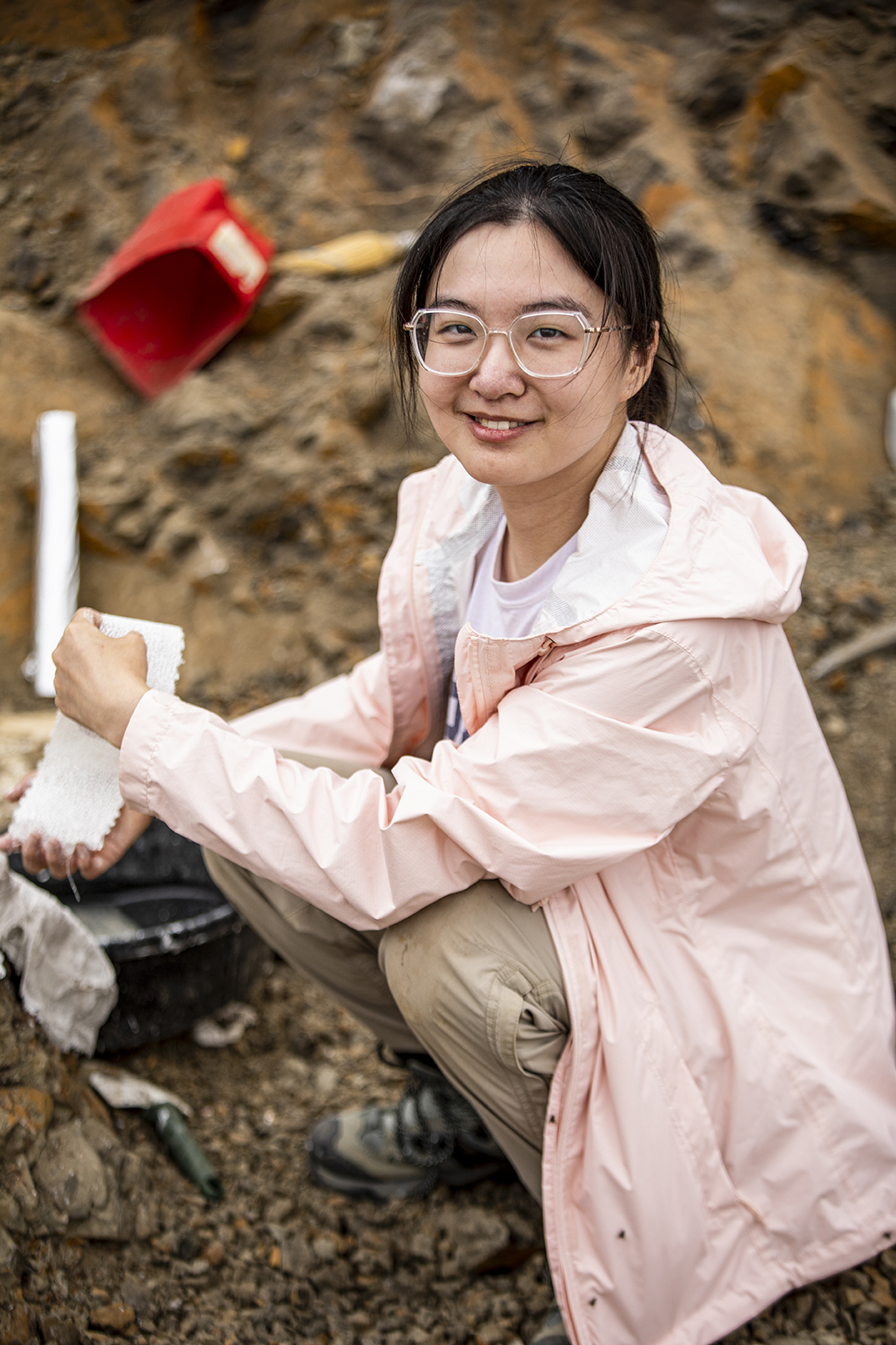 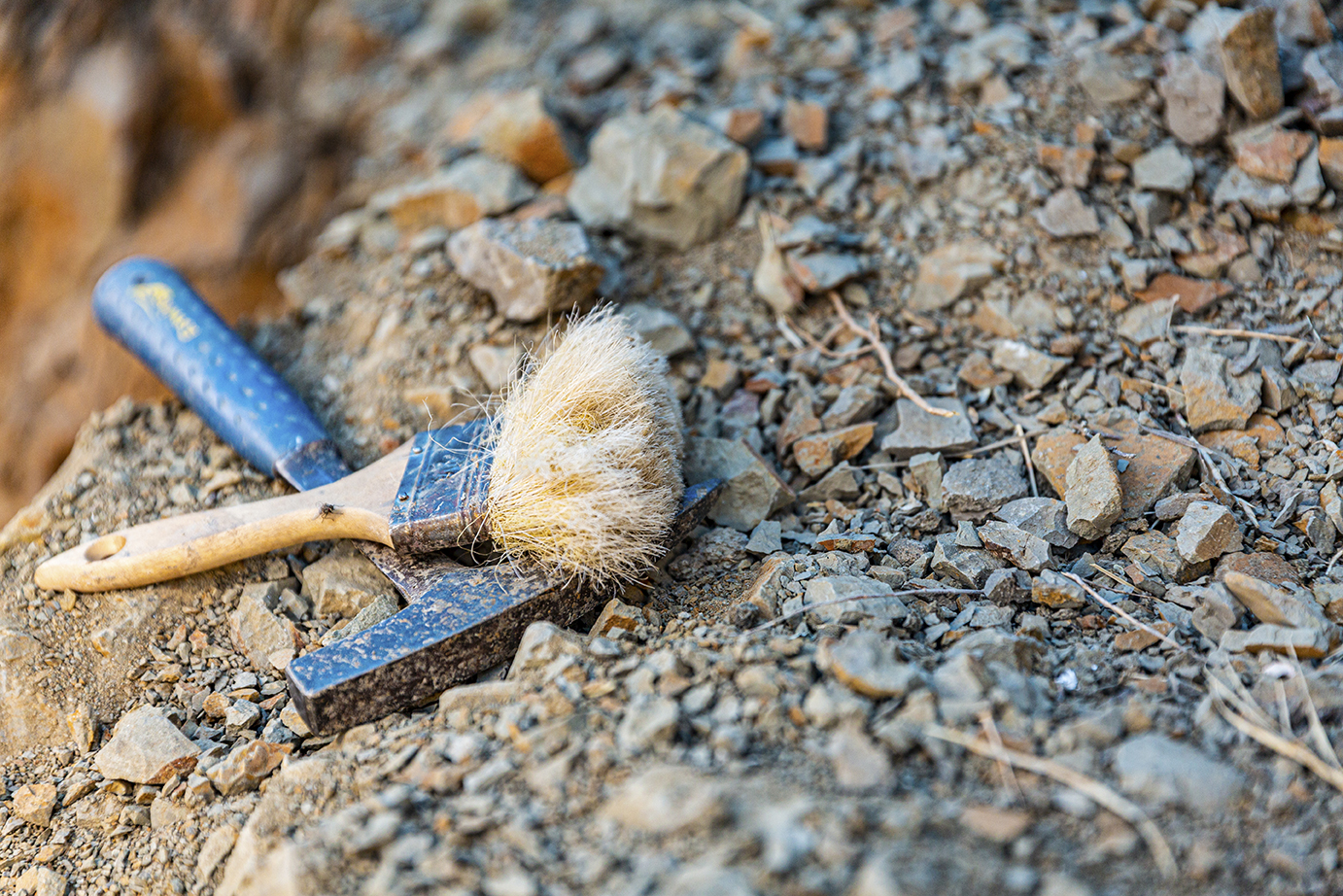 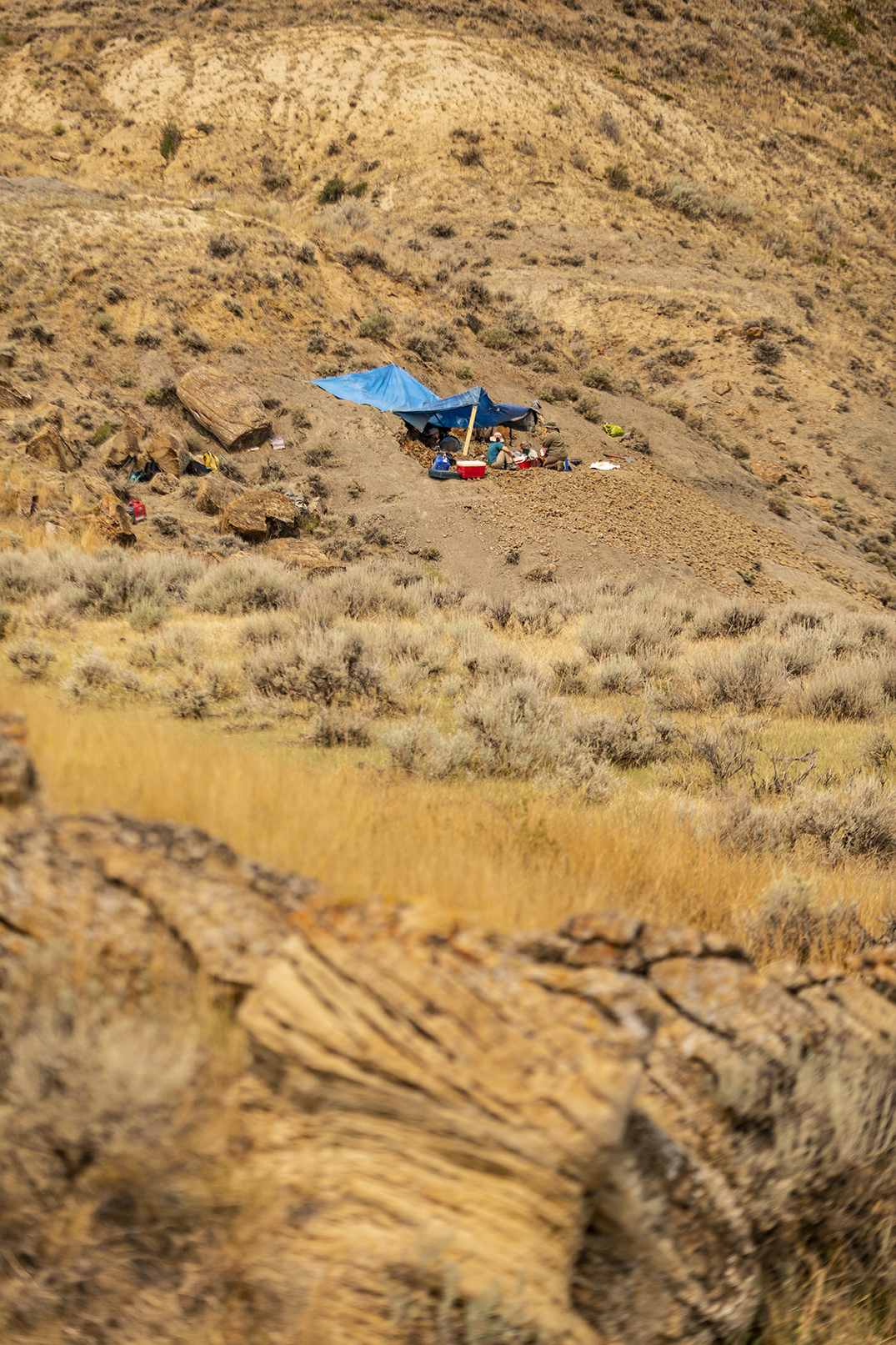 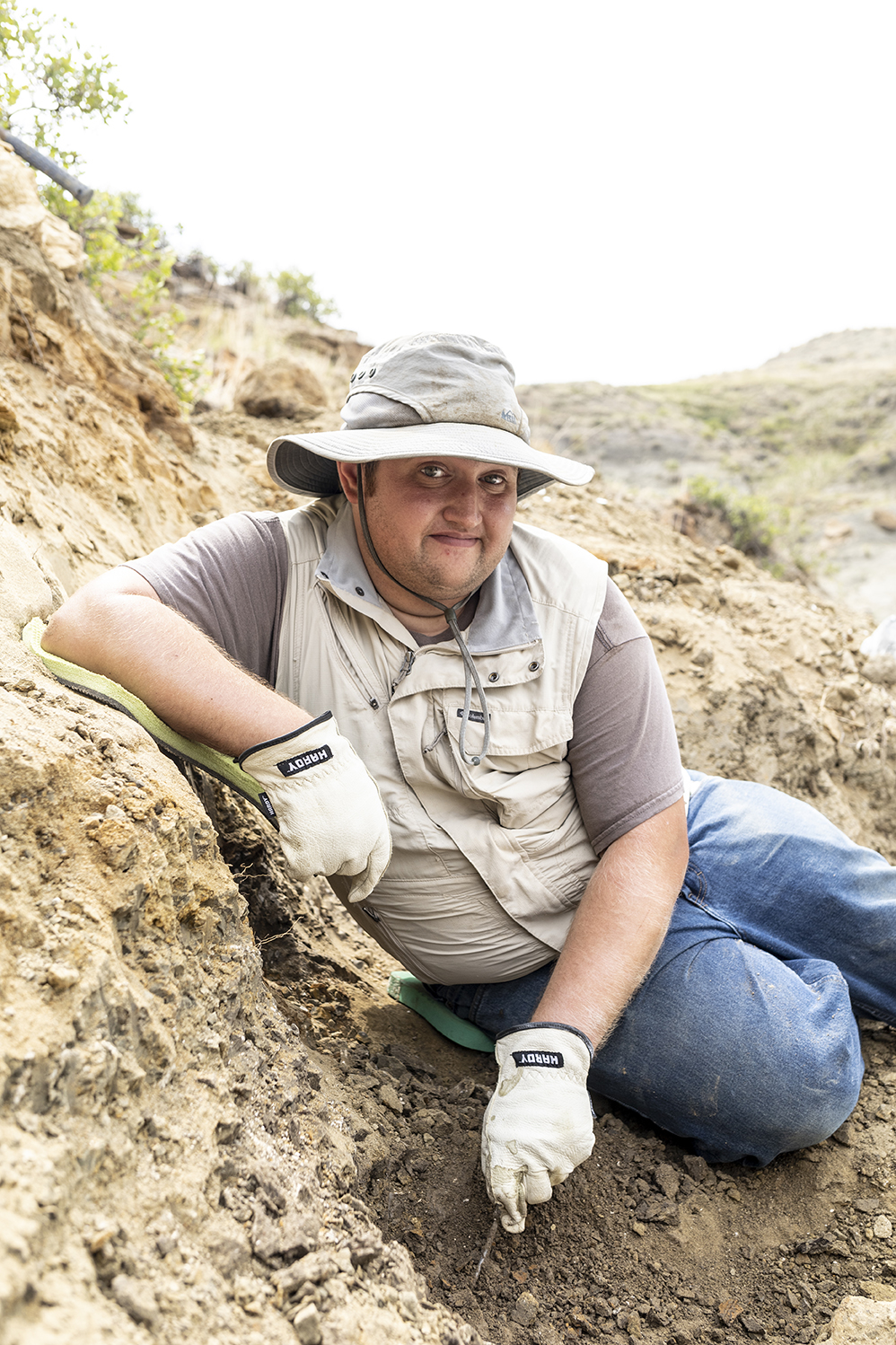 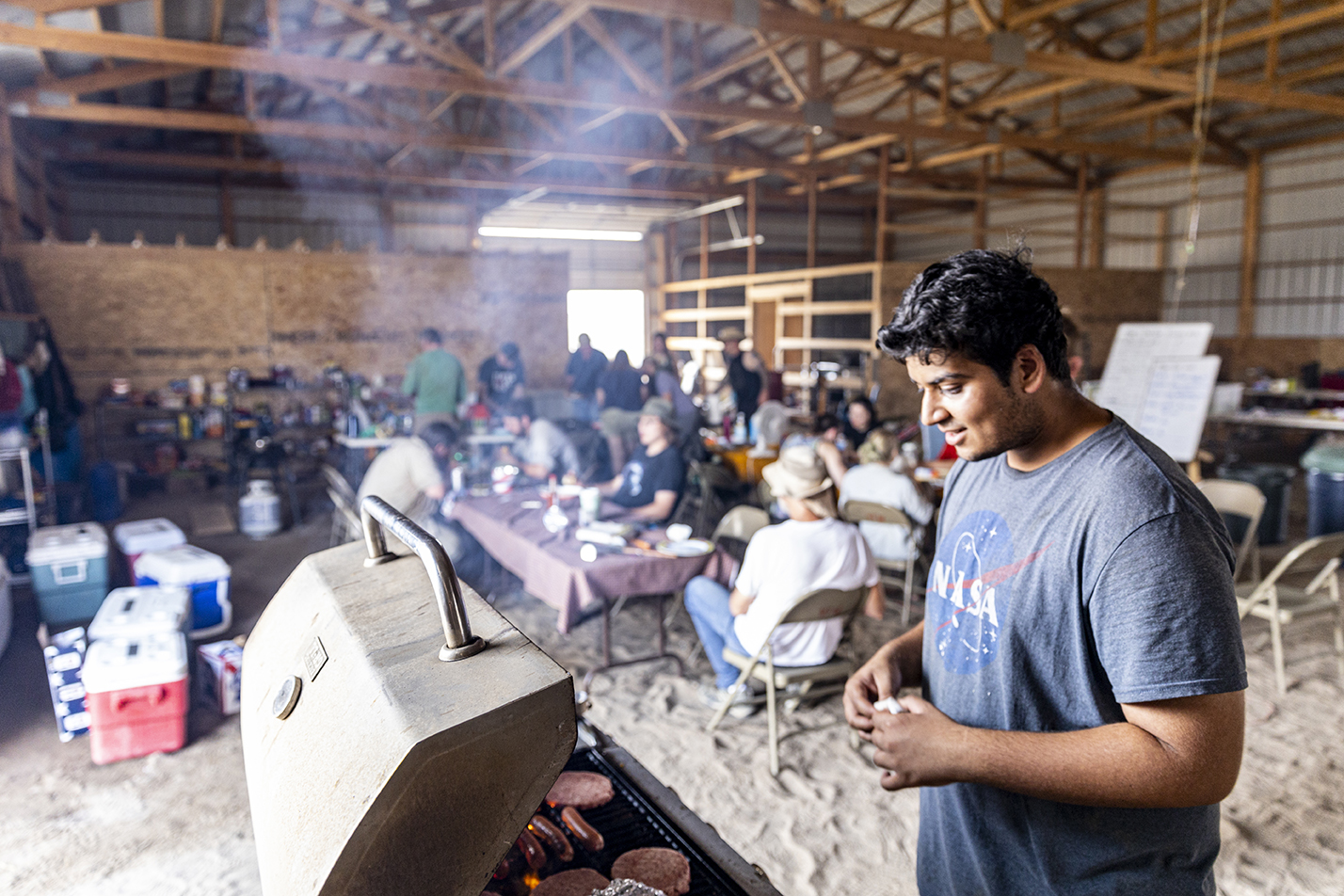 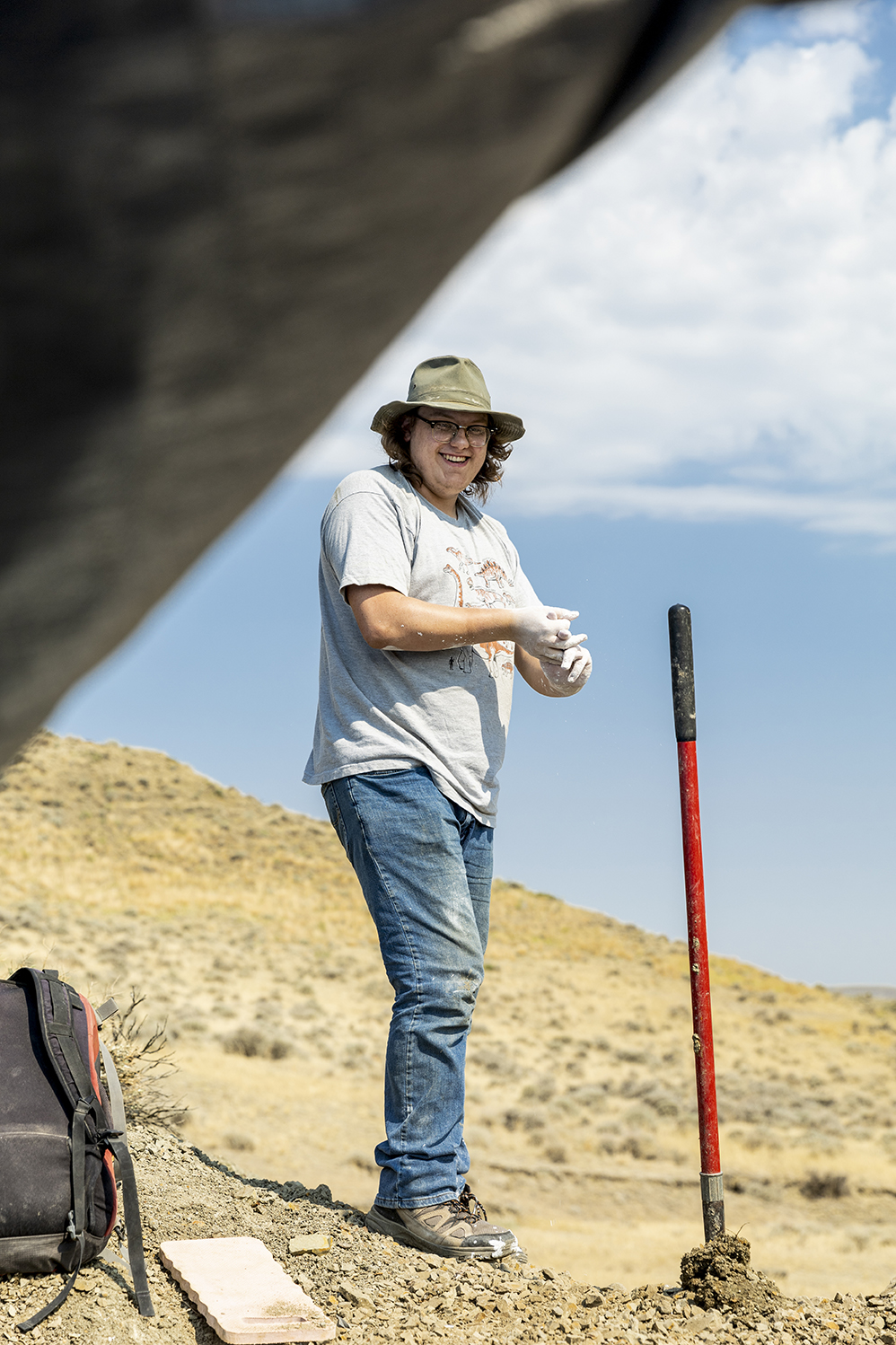 Tools of the trade

After arriving at the main cluster of dig sites each day, volunteers shoulder backpacks, organize gear and coolers full of Gatorade, and start hiking to one of three fossils: the Triceratops, a hadrosaur (duck-billed herbivores) or a theropod (meat-eating dinosaurs that include tyrannosaurids and velociraptors). A smaller team is excavating the fourth fossil, a rare theropod that sends a fresh wave of anticipation through the group: It just might be an entirely new species.

As they walk, they swat at black flies and pull their hat brims down for shade. If chisels, brushes and shovels are essential tools for a dig, so too are sunblock, bug spray and plenty of fluids — especially in eastern Montana at the height of summer.

On this day, UW student Isobel Ruiz, ’22, kneels next to a large hunk of Triceratops frill — the distinctive armored plate extending above its massive head — and carefully uses the point of a rock hammer to pry mudstone away from what might be another bone. UW graduate Han Yao, ’20, takes an even gentler approach, brushing dirt off a large bone fragment that appears to be in danger of shattering. Abrams covers it with a special glue to protect it until she can meticulously separate fossil from rock back in the lab.

Ruiz pauses for a swig of Gatorade and hunkers under the tattered tarp overhead, taking whatever shade she can get. She wipes sweat from her brow and rests for a moment as the tinks of rock hammers echo around her, gradually uncovering more of the Triceratops. Then, it’s back to work. 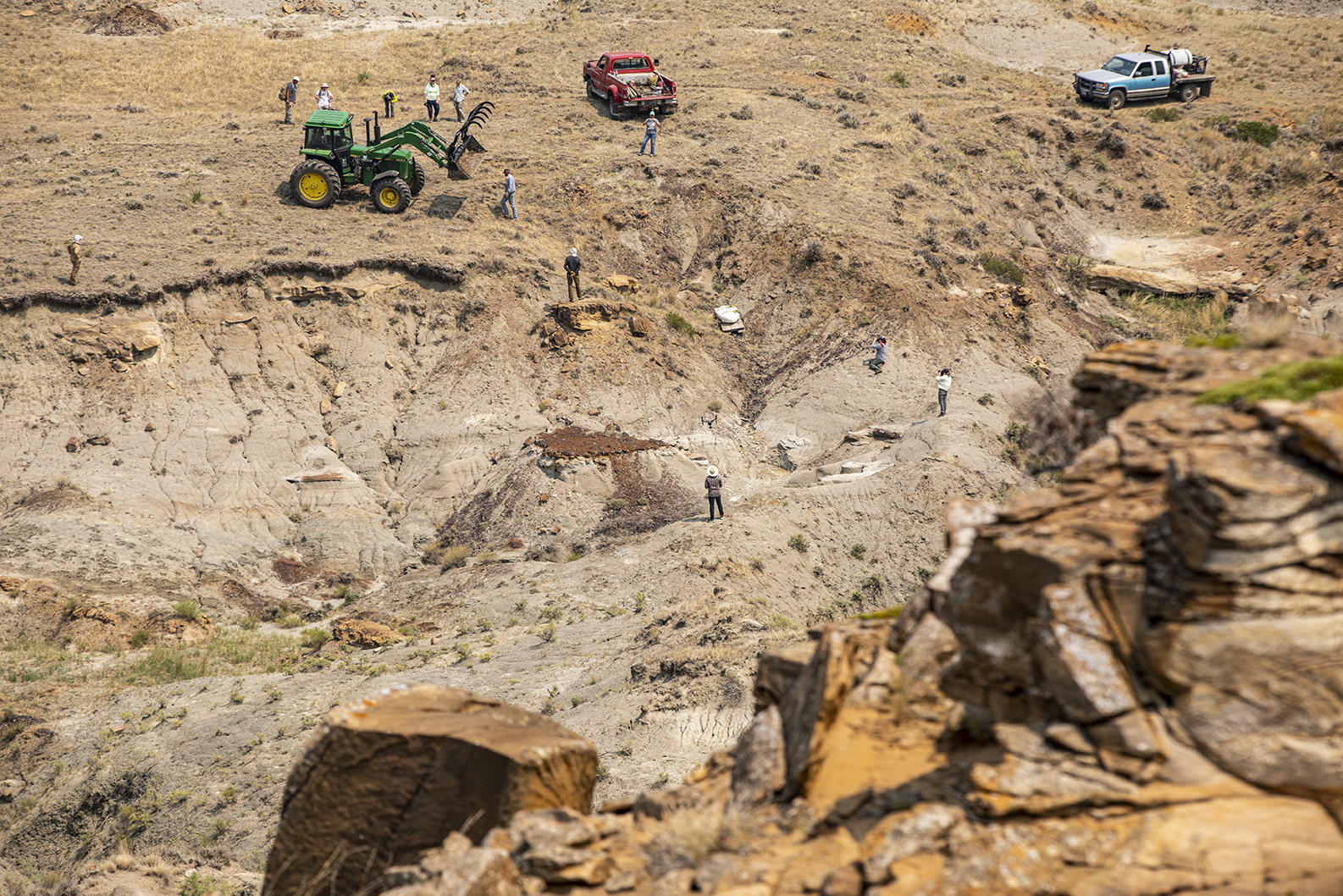 Hauling out a jacketed theropod required teamwork — and a tractor. 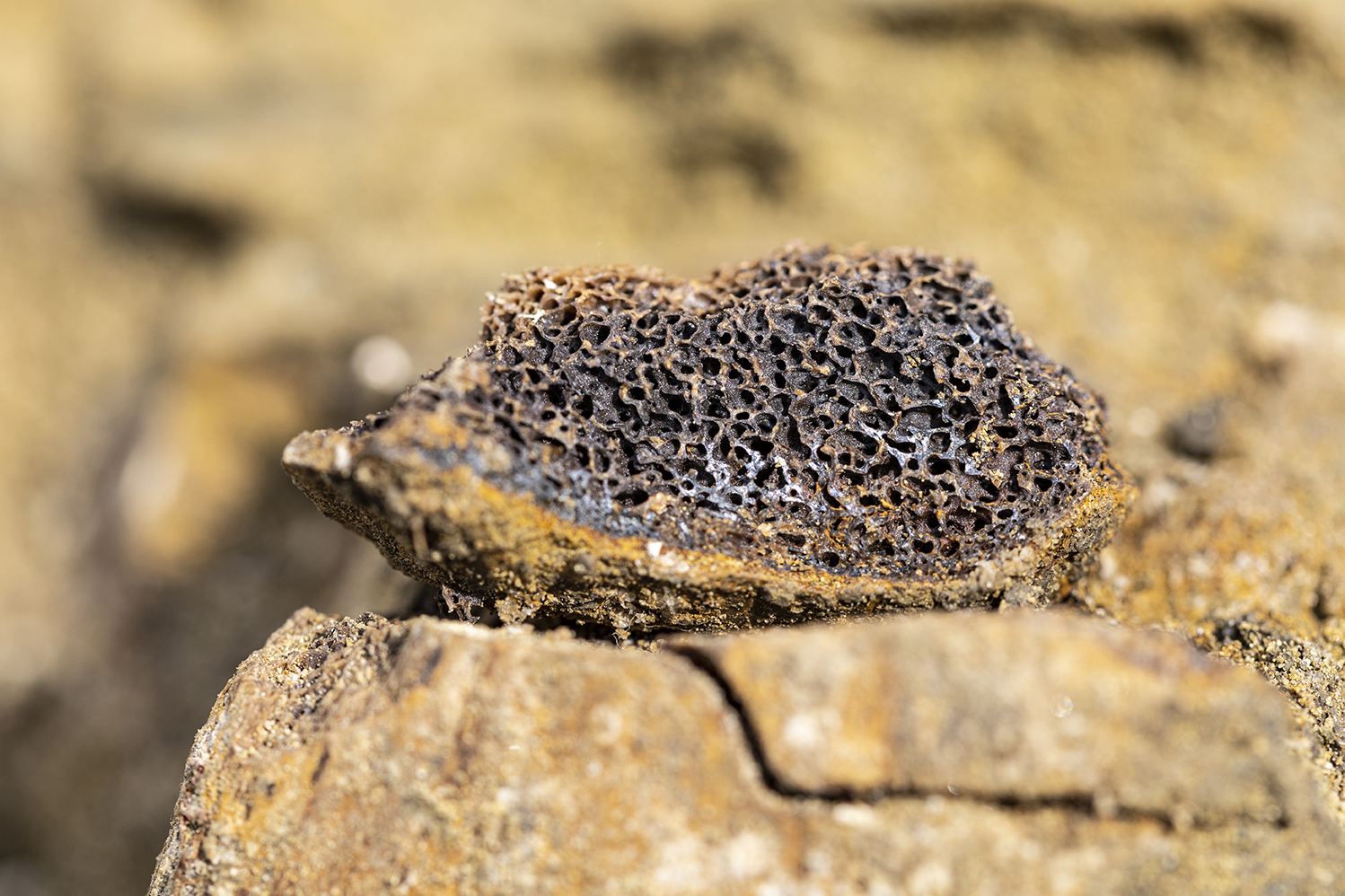 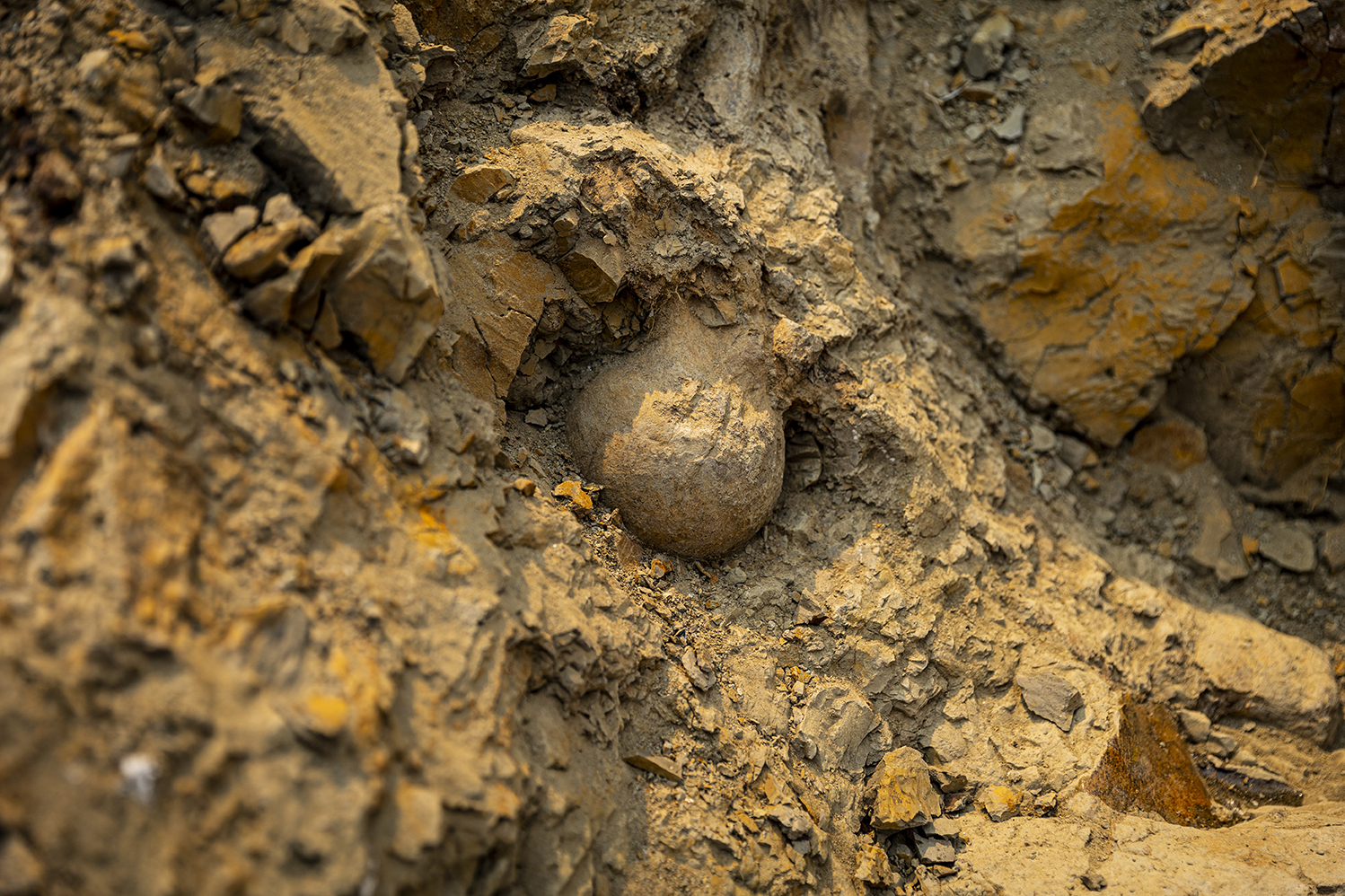 The ball on the back of the Flyby Trike’s skull that connects to neck vertebrae is nicknamed the “trailer hitch.” 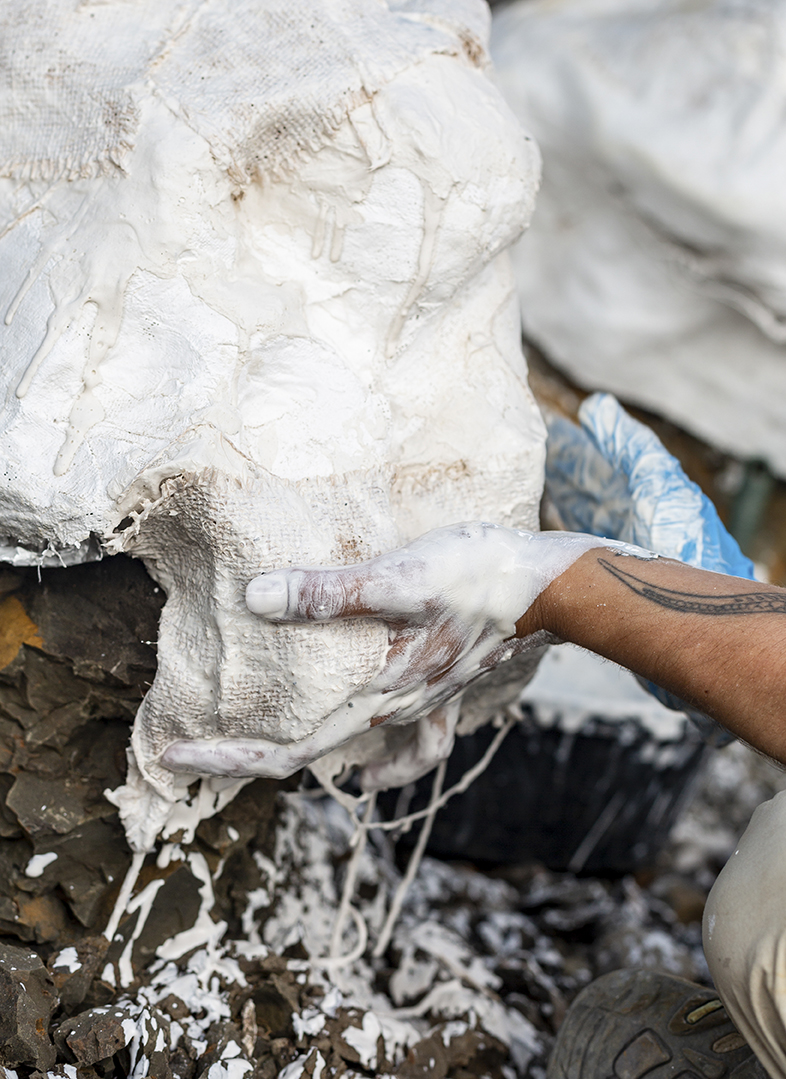 Fossils are encased in plaster to protect them for transport home. 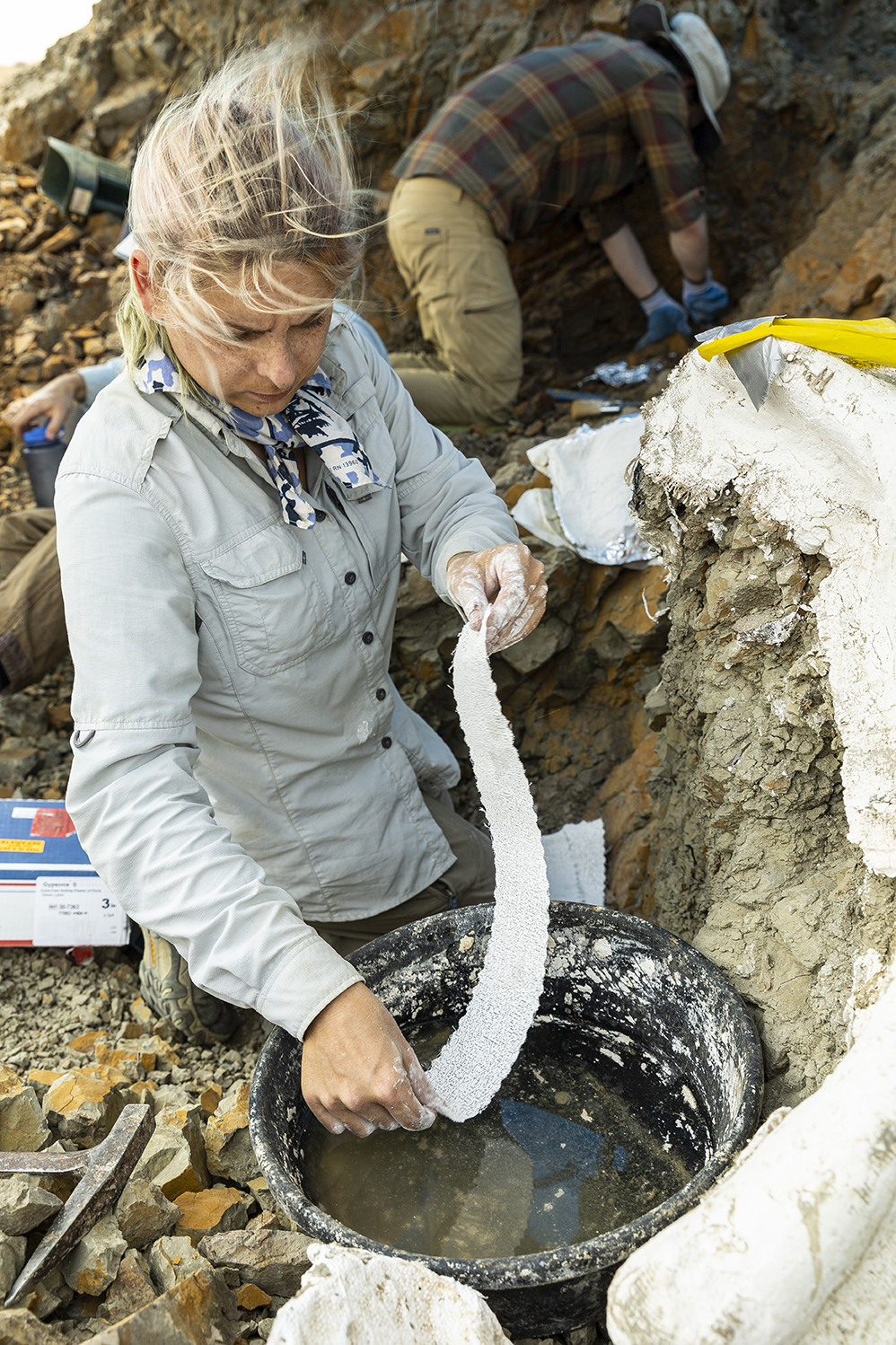 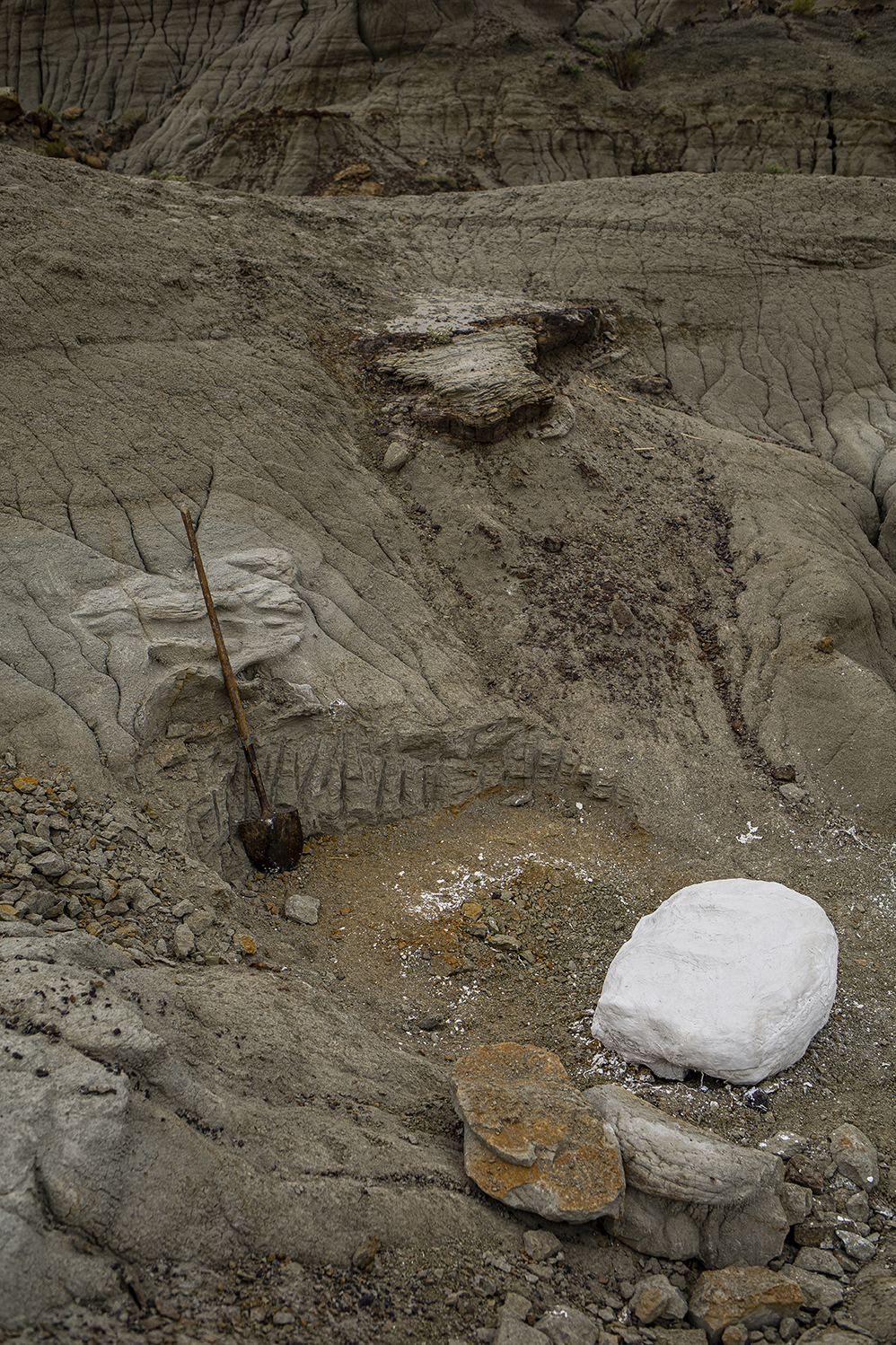 The possibility of a new discovery adds a blast of excitement to what is already a peak experience for second-year transfer student Zeke Augustine, ’23. He has just returned from the smaller site, where he helped excavate what could be a new species or might be a “chicken from hell,” paleontologists’ nickname for the rare Anzu wyliei — an 11-foot-long theropod estimated to have weighed up to 650 pounds. The vertebrae, says Wilson Mantilla, are spot-on for the group oviraptorosaurs, and the fossil is similar in size to the genus Anzu. They’ll learn more as it’s studied back in the Fossil Preparation Lab, but Augustine, a lifelong dinosaur enthusiast, helped secure the clues: a pelvis, vertebrae, limbs and a four-inch claw that Wilson Mantilla describes as “visceral.”

Today Augustine is back with the larger group, focused on a more common hadrosaur — but digging up any dinosaur is the stuff of paleontology dreams.

These aren’t the fossils you see in the movies, standing out a distinct white against the dirt. Fossils form when dissolved minerals seep into and replace organic material, crystallizing in the shape of the original bones. That’s why you don’t use high-tech equipment to scan the ground, explains Wilson Mantilla — it would be like trying to discern rock from rock. You have to dig, and do it carefully.

What’s more, fossils are rarely found complete and intact — they’re often scattered by scavengers, tumbled in water or worn apart in the earth. That’s the case with the hadrosaur that Augustine and Eddie Armstrong, ’20, are working on today, along with volunteer Vince Bruscas Sr., who goes on dinosaur digs every year with his wife and son.

The team has uncovered the hadrosaur’s hips and legs, and much of the fossil has already been encased in plaster for protection and safe transport back to the Burke. Augustine and Armstrong are down on all fours carefully unearthing several vertebrae, which are distinctly smooth against the jumbled mudstone.

Later in the day, volunteers help roll the other plaster-encased theropod fossil — a hipbone of an ostrich-size animal — onto a pallet, which the rancher then winches up the hill with his tractor and loads into Bruscas’ pickup truck for safe transport back to the Burke. 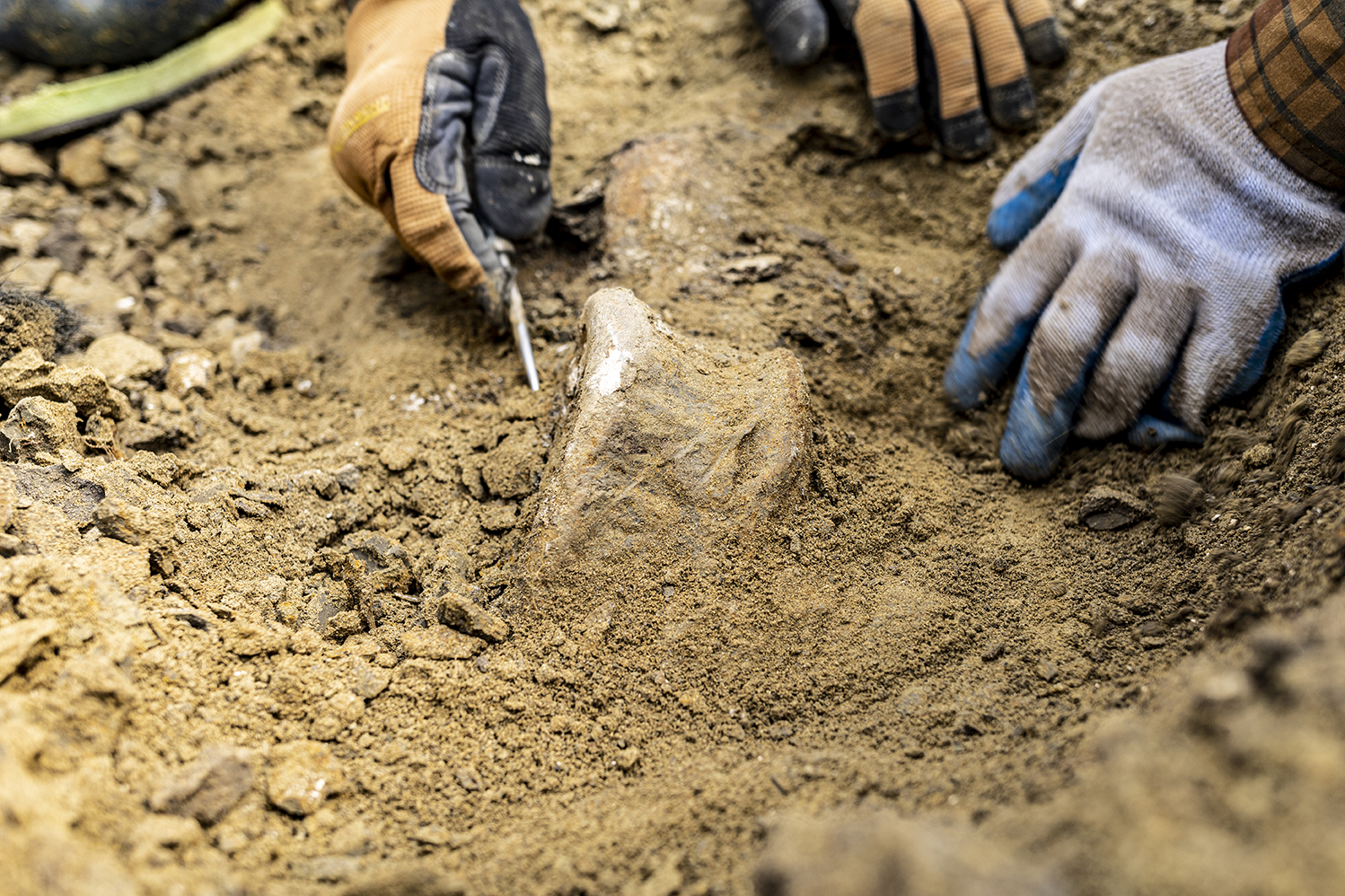 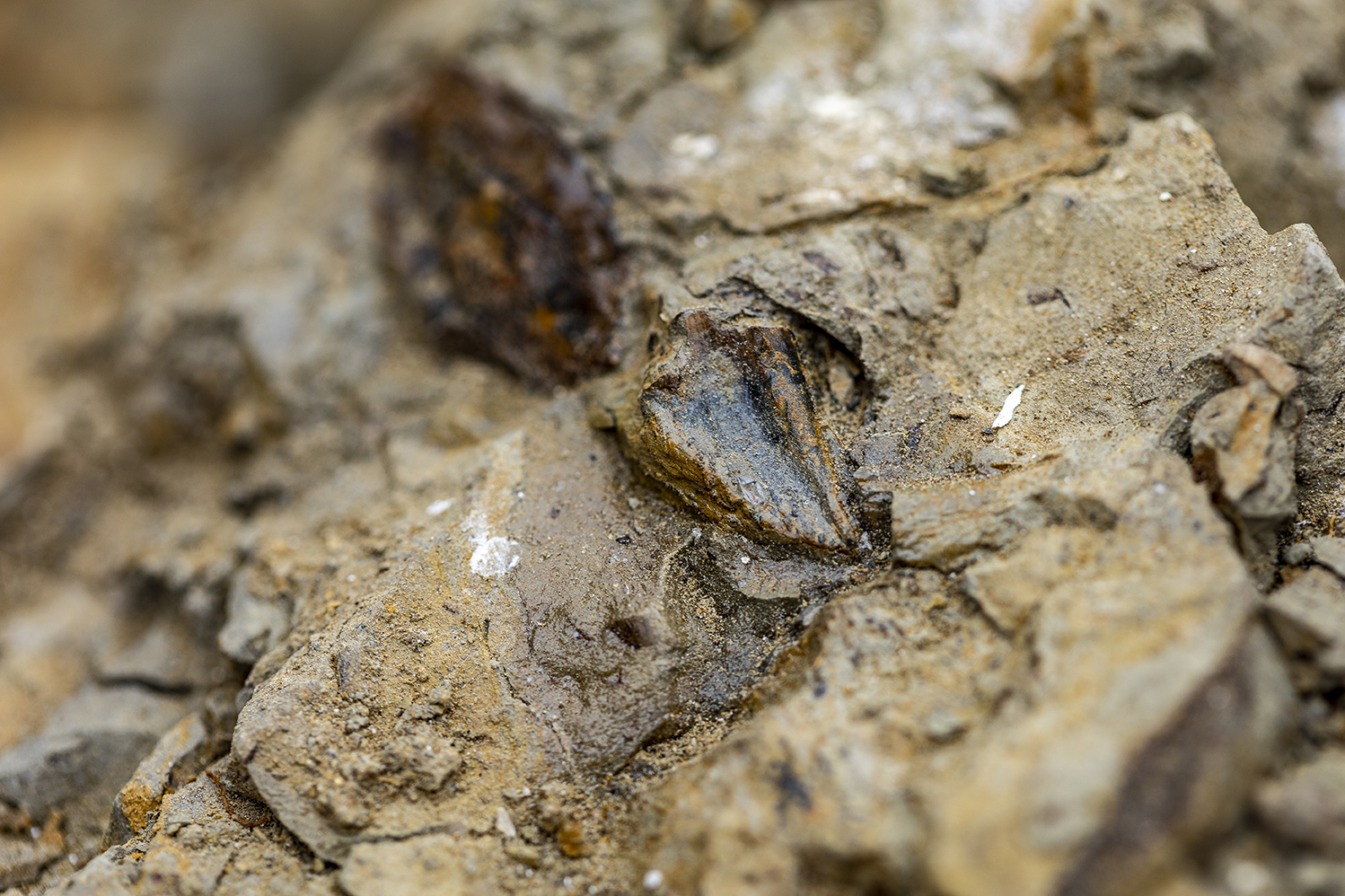 A Triceratops tooth is covered with a layer of glue to keep it intact. 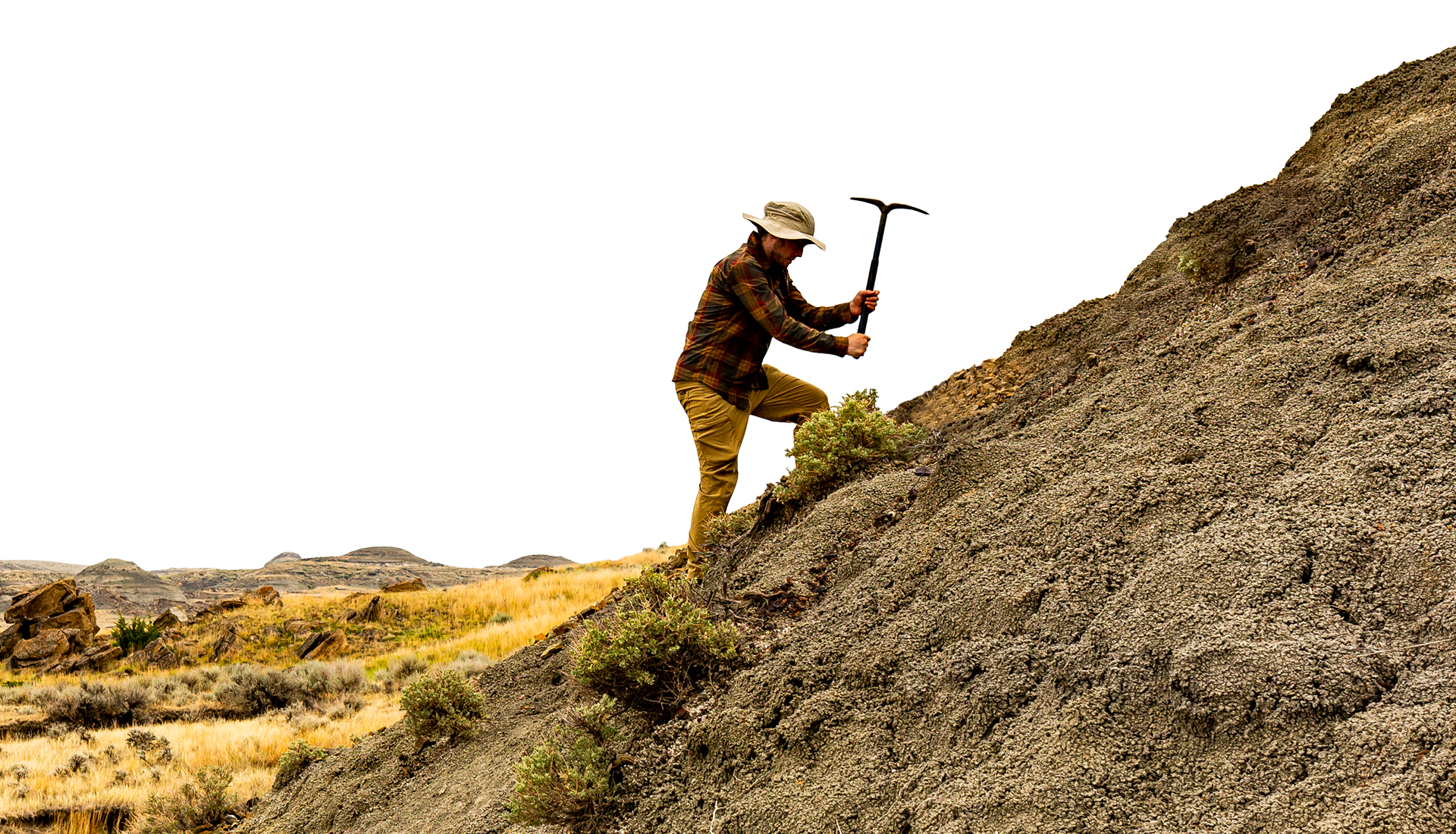 Spanning parts of Montana, Wyoming and the Dakotas, the Hell Creek Formation is a roughly 300-foot layer of sedimentary rock formed between 67 and 66 million years ago. It is arguably the best place in the world to find fossils from the Late Cretaceous.

The future of the past

After a month of digging, it becomes obvious to Abrams and Wilson Mantilla: The dig team won’t be able to excavate the Triceratops this year. The more they expand the perimeter around it, the more fossil they find. There’s plenty left to be unearthed, and they’re running out of time. So, to protect it from harsh weather over the winter, they cover it in insulating plaster and shovel mudstone on top.

While Wilson Mantilla and Abrams look forward to returning next year — especially since the Burke Museum doesn’t yet have a Triceratops skull, only a cast — they’re thrilled about what their team uncovered. The somewhat common hadrosaur and theropod, and fossilized seedpods and amber, will add to their knowledge of the area’s biodiversity at the end of the age of dinosaurs. And the theropod from the other dig site, be it a rare Anzu wyliei or a new species within the genus, will shine new light on the diverse ecosystem of Hell Creek.

“Each fossil we collect helps sharpen our views of the last dinosaur-dominated ecosystems and the first mammal-dominated ecosystems,” says Wilson Mantilla, who’s interested in how mammals rose to prominence as dinosaurs were largely erased from Earth. “With these, we can better understand the fragility, collapse and assembly of ecosystems.”

Ruiz, Yao, Augustine and Armstrong return with something of their own: The experience of a real-life field dig to complement their classroom learning and help launch them toward their dreams of becoming paleontologists.

Someday, they too could help contribute to our knowledge of what once was and what might be. In fact, Wilson Mantilla and Abrams would say, they already have.

“This is not just Kelsie or me doing something,” says Wilson Mantilla. “It’s a full team, and every player has an important role.”

Photography by Dana Brooks, ’21, and Dennis Wise. All activity and photography followed the COVID-19 safety protocols at the time. 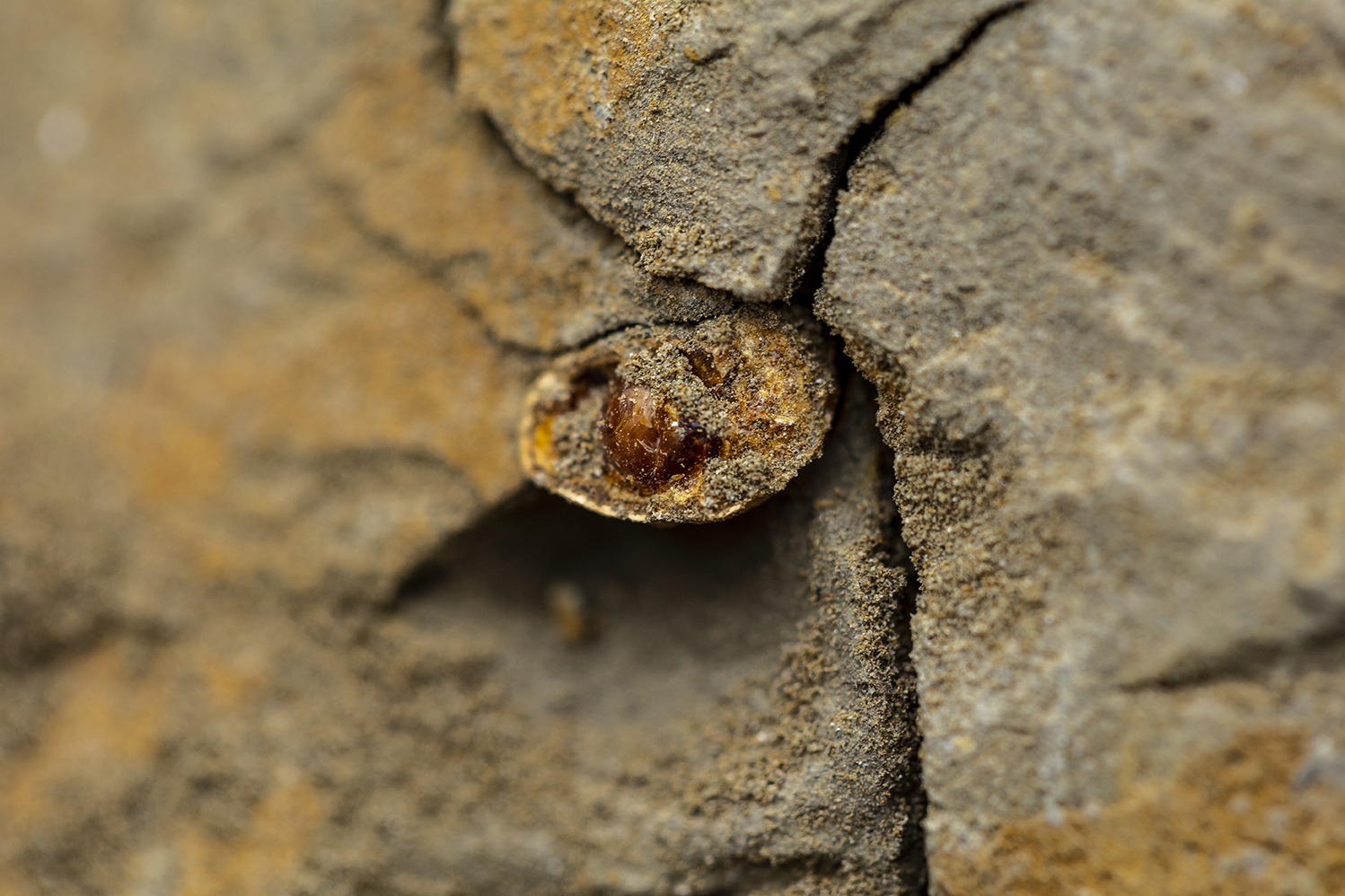 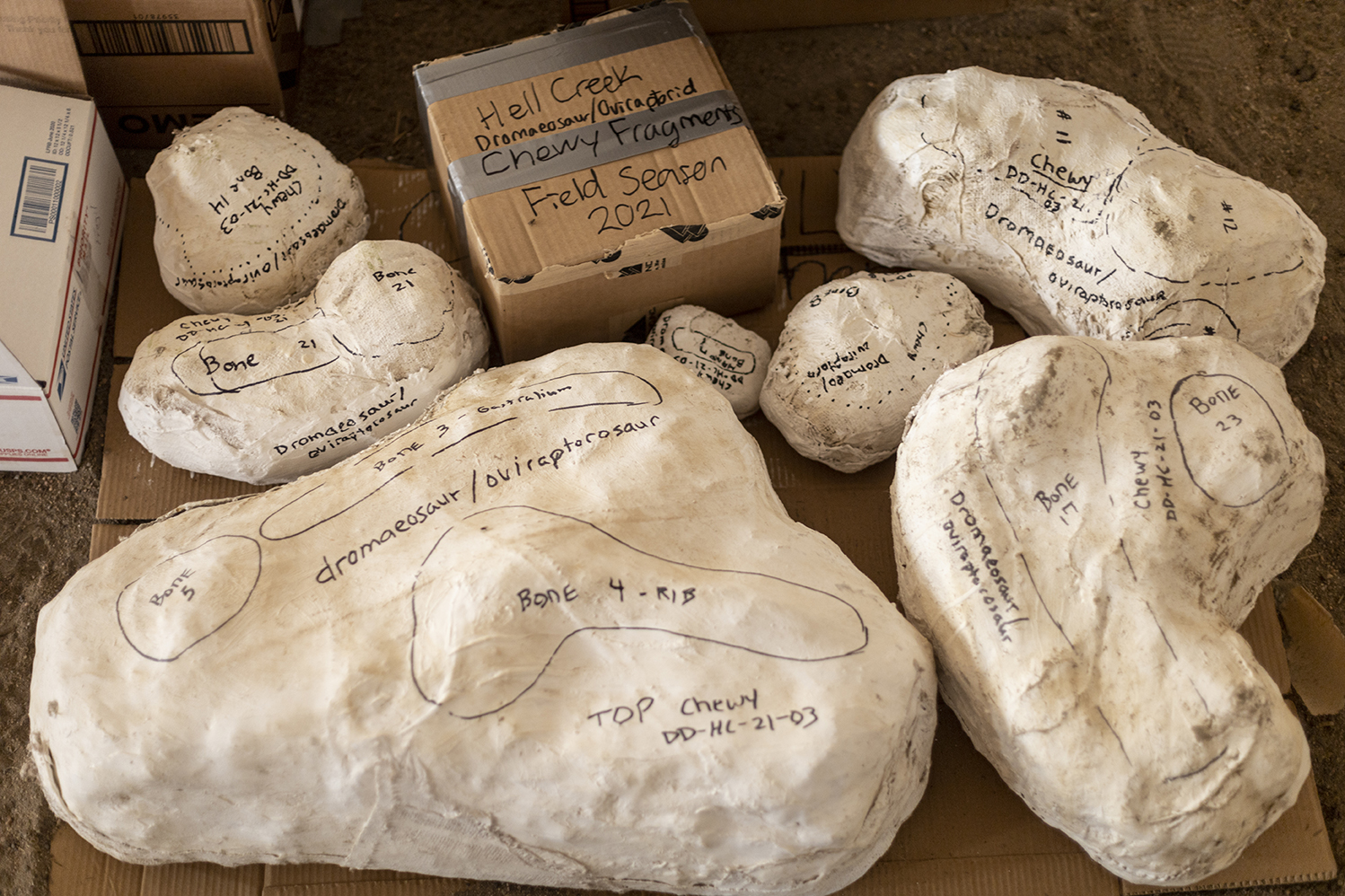 Jacketed fossils, ready to be taken back to the Burke

How big is a hadrosaur femur? What does a theropod hipbone look like? Did Burke volunteers uncover an Anzu wyliei or a new species? And how, exactly, do you go from jumbled bones encased in hardened mud to a fossil displayed in all its glory?

See for yourself: Visitors to the Burke Museum can now watch paleontologists remove rock from the hadrosaur and both theropods. All four dinosaurs will be held in trust for the public on behalf of the Bureau of Land Management and become a part of the Burke Museum’s collections.

Learn more about the dinosaurs of Hell Creek

Zeke Augustine, ’23, has sifted through soil for microscopic fossils and helped dig up a Triceratops. The Burke Museum has been at the heart of it all.

When you support the Burke Museum of Natural History and Culture, you help enrich the museum’s permanent collections and exhibitions — and strengthen educational programming for the UW community and beyond.