A body in motion

Louis Maliyam, ’21, came to the U.S. for computer science — and along the way discovered dance.

Maliyam’s academic journey was supported by donors to the Be Boundless — For Washington, For the World campaign.

As soon as the software design class ends, Louis Maliyam pops out of his seat, grabs his bag and hurries through the crowded hallway. With just 10 minutes to get to the dance studios in Meany Hall, he needs to walk as fast as he can, or he’ll be late. Sometimes he runs.

It’s winter 2020, before the pandemic will hit the U.S. Maliyam heads through Red Square, passing Suzzallo Library. The building’s imposing Gothic architecture made an impression when he first visited campus. “I felt like the place had a history, like something was waiting for me,” he recalls. “It was exciting to know I was going to spend four years at this place.”

Even on soggy days, he doesn’t mind the sprint to dance class; Pacific Northwest drizzle is nothing compared to the downpours Maliyam is used to. In Samut Prakarn, Thailand, where he grew up, the rain is so heavy “you don’t even go outside. You’ll be completely soaked,” he says.

Maliyam would listen to that rain hammering on the roof of his parents’ internet café, where he helped customers and assembled computers after school. Building the machines could be difficult, he says, but he never gave up: “I think it’s fun to solve problems.”

He took a programming class as a teen, and his talent for computers won him a full scholarship to study abroad. He finished high school in New Hampshire, where he took higher math classes to prepare for computer science — and discovered musical theater.

Maliyam continued both pursuits at the UW, entering as a computer science major and adding an acting class to his fall schedule. He continued to be recognized for his talents: in computer science, by earning the merit-based Eileen Bjorkman Endowed Scholarship in Computer Science & Engineering, and in performance, landing a role in the School of Drama’s production of “Anything Goes.”

And when a tap-dance instructor came to work with the cast, Maliyam discovered a department he hadn’t known about — and a new passion.

There’s this feeling that’s unexpected, where you don’t know what’s going to happen next. Improv is new and exciting every time I perform.

Hugs in the hallways

Even on overcast days, the high ceilings and tall windows of the UW dance studios welcome light. The first time Maliyam entered, he felt at home. Still, before he got to know the other dancers, he recalls, “it could feel strange to look into their eyes or dance in front of them.”

Eventually his reluctance evaporated: “The teacher helped us bring our own movement into the room. It made us more comfortable because it created space for failure.” That safety, Maliyam says, helps the students be brave. “We have sweat and tears, happiness and joy at the same time. We show ourselves to each other, and we’re vulnerable when we fail.”

The dancers’ willingness to publicly stretch and challenge themselves fosters a culture he didn’t know he was looking for. “It’s a strong connection we build from dance,” he says. “We say hi and hug.”

As Maliyam tackled more intricate computer science challenges, he pushed himself to open up in dance as well. Modern dance, especially improvisation, helps him level language barriers and communicate on a deeper level. The form’s spontaneity gives him flexibility and freedom. “It’s a tool to tell a story,” he notes. “We can express what we feel in the moment.”

He had that opportunity last January in UW Dance Presents, a Department of Dance showcase for faculty choreographers. Maliyam and his fellow dancers, all costumed in shades of pink, performed in a piece called “Pink Matter Vol. 2: What Is Love?” Bodies came together and drew apart as they moved freely to an R&B song, voicelessly communicating about love, desire and relationships. “There’s this feeling that’s unexpected, where you don’t know what’s going to happen next,” Maliyam says. “Improv is new and exciting every time I perform.”

Last spring’s dance majors concert was ultimately canceled amid rising coronavirus concerns — but even in the preparation, Maliyam found new confidence and greater community. The first sequence — a piece called “Do We Have Home?” — starts with Maliyam alone onstage, dressed in black, his back to the audience. Violin music swells and he begins to move. “Success is not in the outcome or the things we create,” he says, “but in the rehearsal process, along the way.”

The teacher helped us bring our own movement into the room. It made us feel more comfortable because they created space for failure.

The power of vulnerability

Maliyam brings the inclusive spirit of dance into his work as a teaching assistant in the Paul G. Allen School of Computer Science & Engineering (CSE). He wants his students to have the same sense of belonging he felt in his first dance class.

“The hard work is to make them feel that their worth is important,” Maliyam says of his students, “so they’re not afraid to speak in front of their peers and create a community in which it’s OK to fail.”

He makes himself approachable by sharing about his own life. “I’ve seen students who need help, but they don’t feel like they can talk to us,” he says. “Vulnerability closes the gap between teacher and student.”

Maliyam plans on bringing his heart-centered leadership style into his future workplace: “I want the place I work to be the place I love to be.” 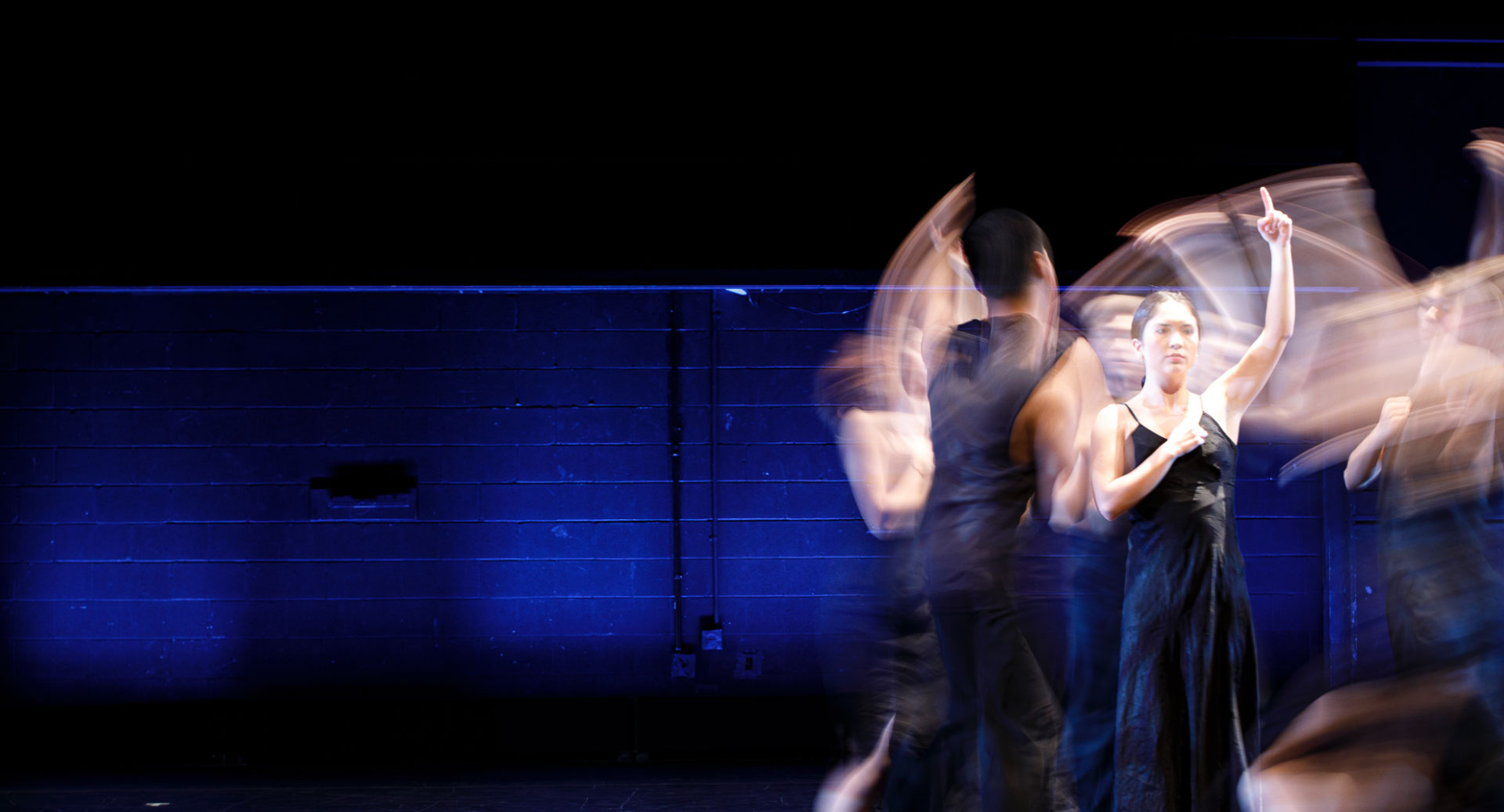 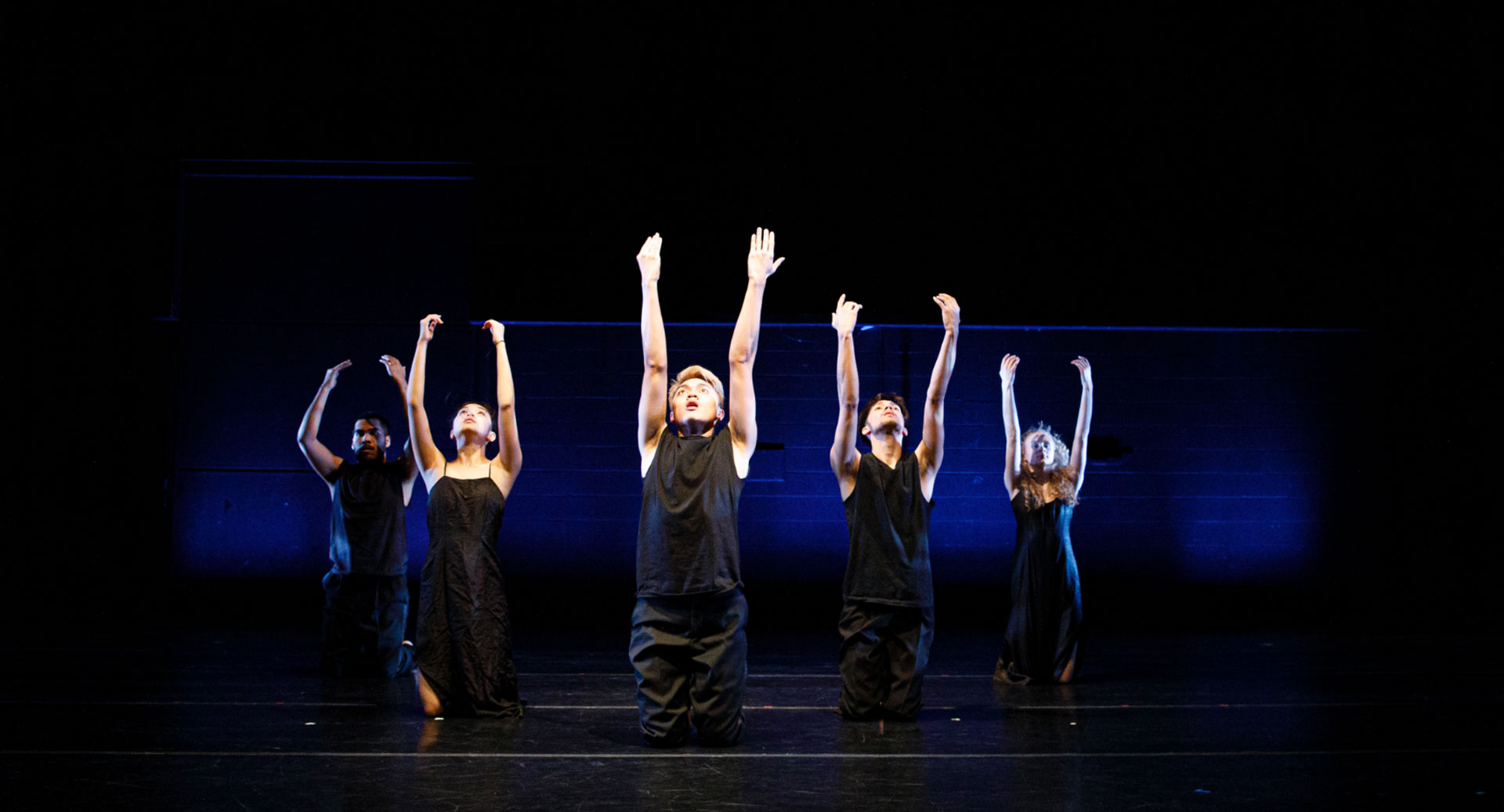 “Success is not in the outcome or the things we create,” says Maliyam (center), preparing here for a performance, “but in the rehearsal process, along the way.” 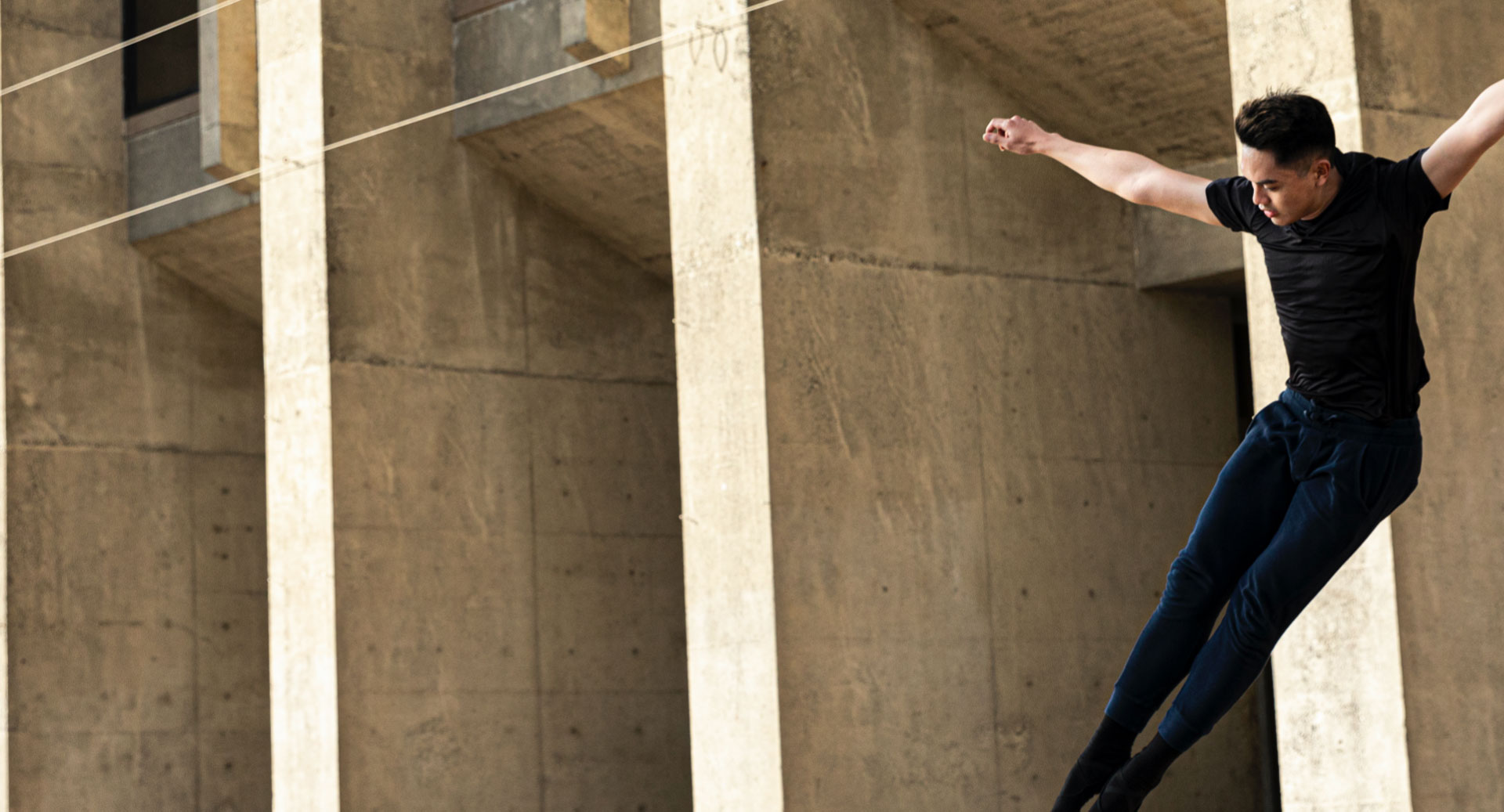 Maliyam gravitates toward improvisational modern dance, citing the form’s flexibility and freedom. “It’s a tool to tell a story,” he says. “We can express what we feel in the moment.” 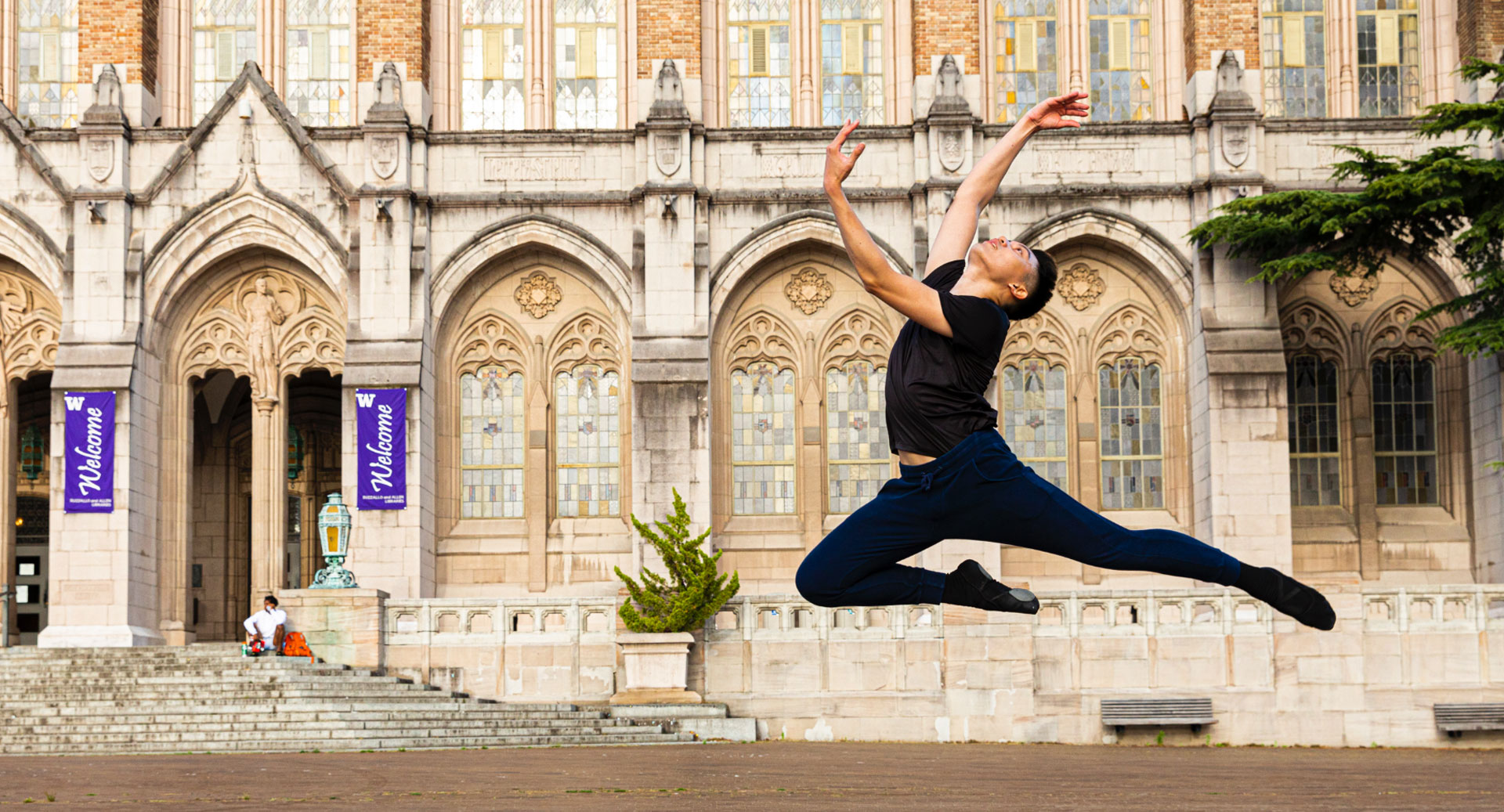 No matter where he ends up after graduation, there’s little doubt Maliyam’s professional career will mirror his academic one. Last year, as a sophomore, he received the UW President’s Medalist Award — a recognition given to only one student in each undergraduate class. The medal reflects his excellence in CSE classrooms and onstage.

And when he received the Bjorkman scholarship, offering tuition support for a high-performing computer science student, Maliyam said, “I felt that someone had seen my hard work. I feel really grateful — it’s allowed me to focus on the goals I’ve set for myself.” Goals such as his summer internship at DocuSign. Computer science, Maliyam says, “expands my horizons, while dance fulfills my soul.”

When you provide scholarship and program support, you can give students like Louis Maliyam greater opportunities to pursue their passions — or discover new ones.